I was fortunate to have met Eric Walker twelve years ago, shortly after he started a remarkable engine building career - at age 70 - culminating in 15 locomotives built to run on his own Kirton Light Railway. A kind, intelligent man who had turned his hand to many things over a long and productive life, I always came away inspired by his "can do" attitude to all things mechanical. 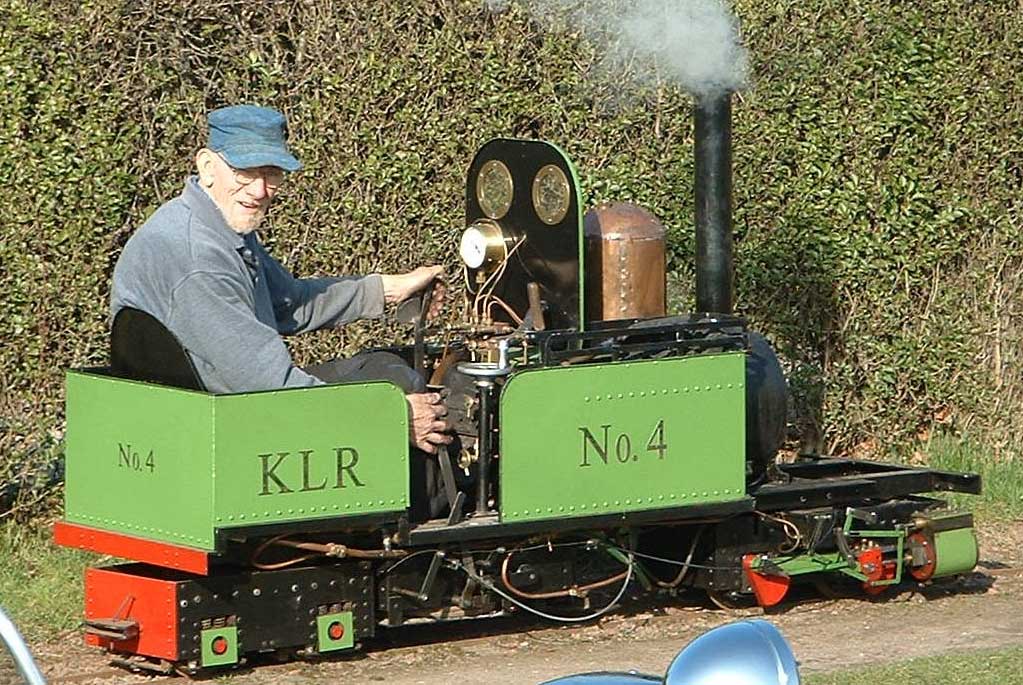 Over the years I visited the railway many times - we've had most of the engines he built, there are links to some of them below.

All locomotives were built 7 1/4 inch gauge to run on the Kirton Light Railway
Eric wrote up his eventful life in six slim, downloadable volumes - recommended reading, they're still available from Amazon

I'm indebted to Eric's daughter, Victoria for the notes below penned for his eulogy last year and to his wife, Gloria, who has always given Jayne and I an unfailingly cheerful welcome whenever we've had cause to visit over the years.

Eric was born in the mining village of Edwinstowe on 29th December 1927, and so began the life of the man that the people gathered here today were proud to call husband, their father, father-in-law, grandfather, great grandfather, uncle and their friend.

Eric wasn't one for fuss or ceremony, he chose to live a traditional life with strong family values. He led a very fulfilled life, travelling, started his own business and built many things including his family home.

Eric was conscripted to the army, in January 1947 which also turned out to be the coldest and worst winter weather in living history. Whilst stationed in Germany Eric became a cook before being demobbed in 1949. The first thing he did was to buy a new motor bike a 350cc Flat Twin Douglas, with the £70 he had managed to save whilst serving, he added this to his savings. The total cost was £184, he paid a deposit and given two years to pay, however Eric paid it off in just one year.

Eric began his new job as a Signal man at Mansfield Colliery, first doing his training at Lincoln Signalling School. Getting to and from the Signal Boxes was always a challenge, especially if the weather was bad. Gloria said she remember Eric telling her that one foggy morning Eric missed a bend in the road and his bike hit a dike and he went straight over the handle bars, and landed on his right hip. He said he could still feel the pain thirty years later. Some years later Eric decided he'd had enough of the railway and joined his mate Alan driving an electric milk cart, doing the country runs, Eric said the perk to this job was a drink of Channel Island Milk each day.

In the spring of 1954 Eric and Alan decided they would travel to Canada for an adventure. In those days there were no planes flying the Atlantic so they sailed from Southampton calling at France first then to Ireland. During the voyage the Irish entertained the rest of the passengers with Irish dancing and singing, Eric said we were fascinated. Eric also recalled one evening watching a school of dolphins, the next morning they were still there, Eric wondered "do they ever sleep?" On the approach to New York, through thick fog Eric saw a glimpse of The Statue of Liberty, what a moment.

On the journey to Canada a bus took them to the Niagara Falls, Toronto, Scranton and Buffalo. Eric remembers Niagara Falls was truly spectacular and they both spent time taking photographs. Once they settled they went to the employment office to look for work, they were advised to go west. Eric recalls meeting up with two Scots lads, they said they'd got work, working at a Lunatic Asylum, neither Eric nor Alan fancied that. They travelled 400 miles to Winnipeg where they found a job on a dairy farm. They then moved on to Regina, where they got a job as painters, painting the outside of the wooden bungalows with a 6 inch brush and paint in a 5 gallon tin. Eric said "just imagine 1/4 acre of wood, a lot of it above head height, and a 6 inch brush, you soon learn to use both hands." Eric and Alan had numerous jobs during their stay in Canada, including working for the Canadian Pacific Railway, before returning home in the autumn 1954. Gloria said Eric remembered a lot of detail about Canada because the letters he wrote to his mother were passed on to her when they got married, she still have those letters today.

Once home Eric talked to his old boss and returned to work as a signal man once again, where he continued to work until the mid-70s.

On a chance encounter with his mate Alan who he had not seen for a while, Alan told him he was getting married and wanted Eric to be best man, and that is where Eric met the woman he would later fall in love with and marry, Gloria. Alan had married Gloria's older sister, Ada. Eric and Gloria married on 8th December 1956 and honeymooned in London, staying at the Russell Square Hotel.

Eric and Gloria stayed in lodging at Edwinstowe for the first 8 months of their marriage until they found a property for sale at Kirton which was on the market for £200, it had 1/2 acre of land with an old railway carriage to live in. They bought the property and during those 57 years they have moved three times on the same patch of land, living first in the old railway carriage, at the top of the garden, then moved to a new prefab bungalow built towards the front of the garden before finally building their new house in 1978. Eric and Gloria have always loved living at Kirton, being a small farming village a warm and friendly place. During their marriage Eric and Gloria have had five children, Jill, Timothy, John, Victoria and Annie as well as many Pigs, Goats, Chickens, Rabbits, Quails, and the list goes on.

During the mid-70s Eric later became a Self-employed Boat builder and later a Canoe building which he did for 20 years.

Eric was a very creative and talented man and could turn his hand to anything always having numerous projects on the go, from building; a family boat, family swimming pool, solar panels, fibre glass minis, restoring antiques, making furniture and the list goes on.

In 1988 Eric decided that he and Gloria needed one more travel adventure, and so off they went to Australia flying for the first time. They went back packing traveling around by bus. Also visiting Bali and Tasmania spending 6 months there before returning home.

In 1994 Eric got itchy feet once again and so off they went to tour Australia this time by train also visiting New Zealand and returning home after 4 months. This was to be the last of their great travel adventure.

It was Eric's love for all things railway that lead him to his most recent hobby building sixteen 7 1/4 gauge steam engines at the tender age of 72 turning the front room into an engineering work shop.

Eric died on 25th December 2014 aged 86, just four days short of his 87th birthday, I know he will be greatly missed by everyone who knew and loved him.