Topics: Railway visits.
I am fortunate enough to own a very beautiful 10 1/4 inch gauge Great Western "Saint", built by Neil Simkins for Lord Braybrooke at Audley End in 2003. It normally lives in the workshop, where it's warm and dry and I can admire it, but a lack of local running facilities means that it gets little use. All that changed in May, when I received an invitation from Richard Coleby to run it at the Stapleford Miniature Railway's private running day. 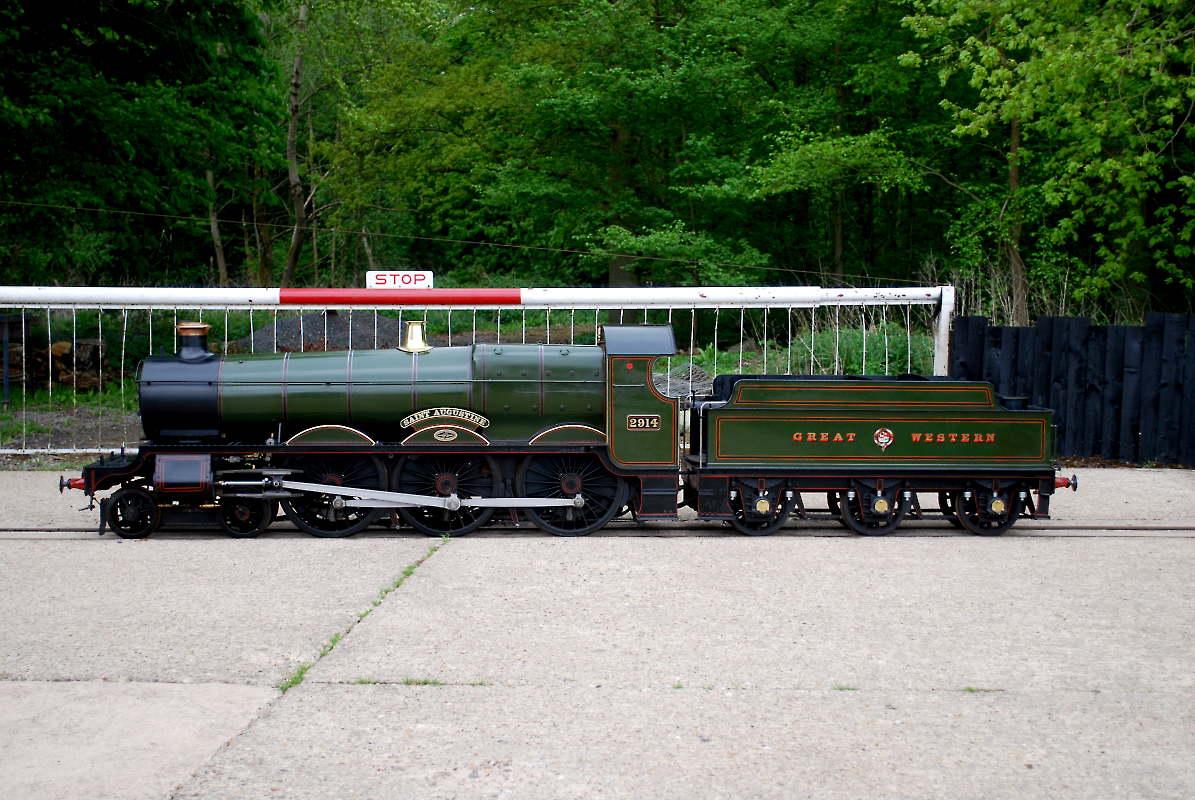 Original plan was to take it down there a week before, but work commitments meant the thing was only loaded onto our trailer late Friday night - Sam and I took off early Saturday and arrived just as they were getting their own engines steamed. 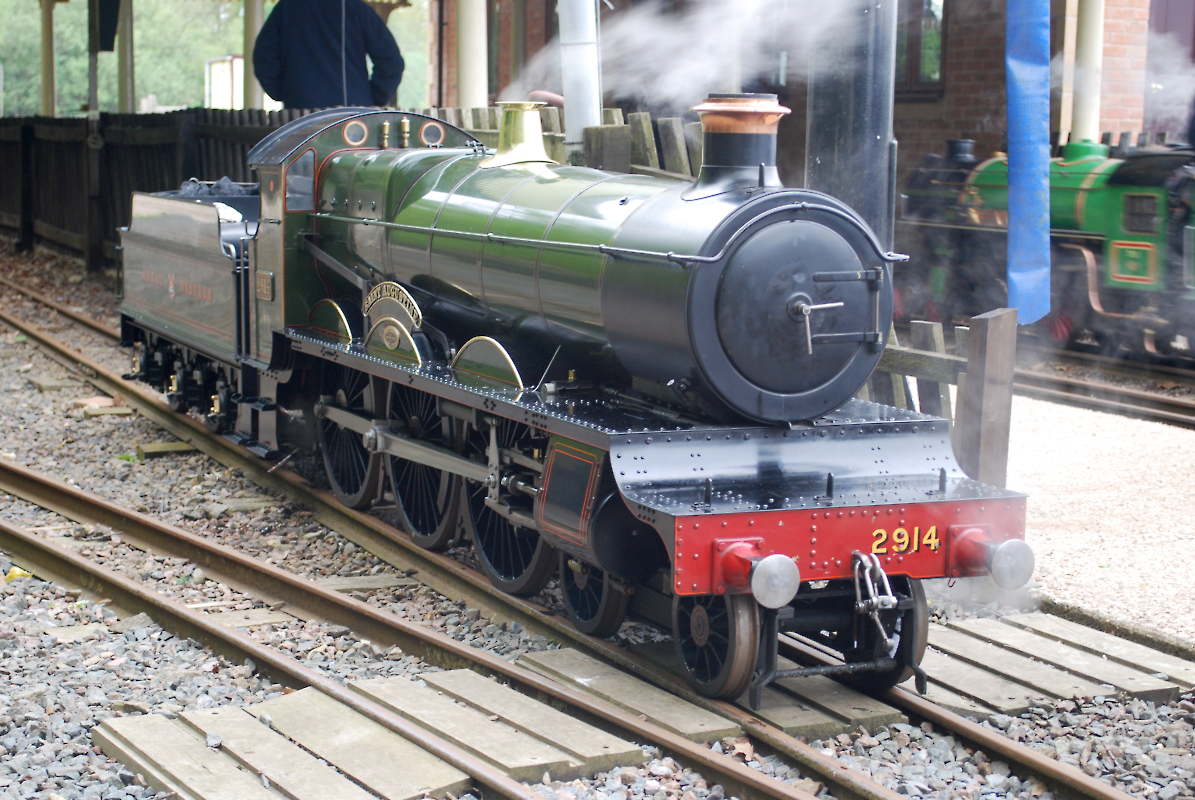 A quick once over from Bob Moore, their chief engineer, to make sure our boiler paperwork was up to date and the wheel back-to-backs weren't going to wreck the track, then onto the steaming bays and get a fire lit. Whilst it was warming up, we had a chance to look around at the other engines in the shed, including their own Saint "Hampton Court" - built by Trevor Guest to a slightly smaller scale than ours, but with a dropped footplate which allows the driver to get right down into the tender, arms resting along its top edges, which felt very comfortable. Sadly I didn't get a chance to see it go for more than about thirty seconds, when a cracked  top gauge fitting sidelined it for the rest of the day. 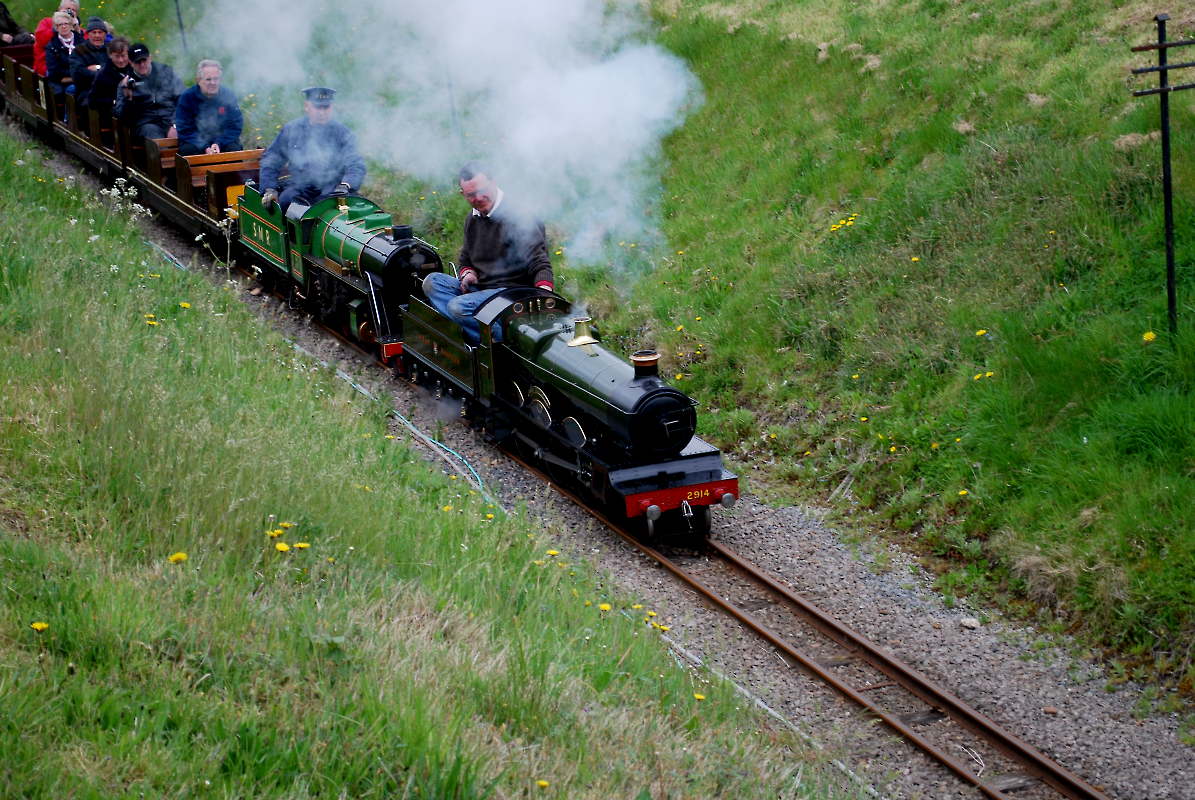 Once in steam we were waved back onto a full train. No gentle trips light engine to learn the road, you get thrown in at the deep end at Stapleford, I guess there were sixty or so people on it! I was put on the front, with their Atlantic "John H Gretton" behind to provide assistance if required, then off we went. It was my first serious run on the engine - suffice to say that after setting off with 150psi on the gauge and the safety valves feathering, three miles and a long climb back up to the station later, it was more like 90psi and grateful for the banker! 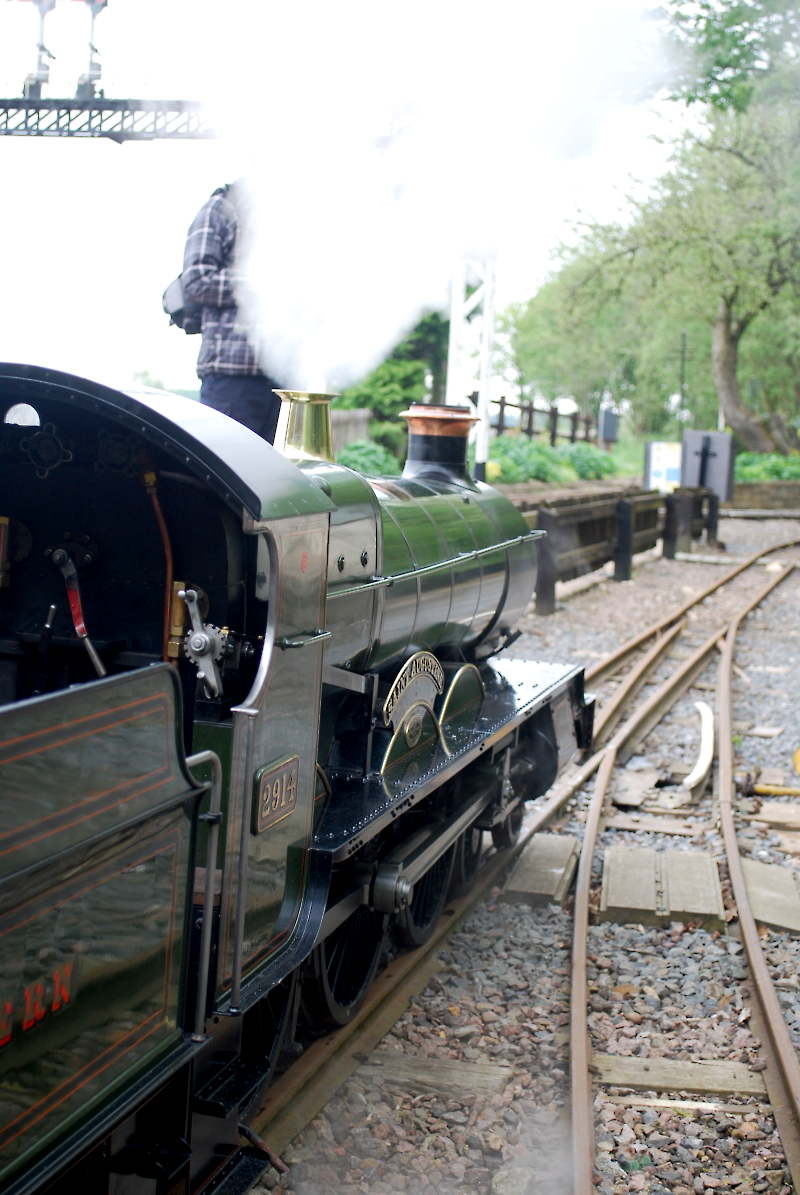 After a few more runs the engine settled down, I found how much fire it wanted and we acquitted ourselves well, I think (certainly well enough that they offered a return invitation). 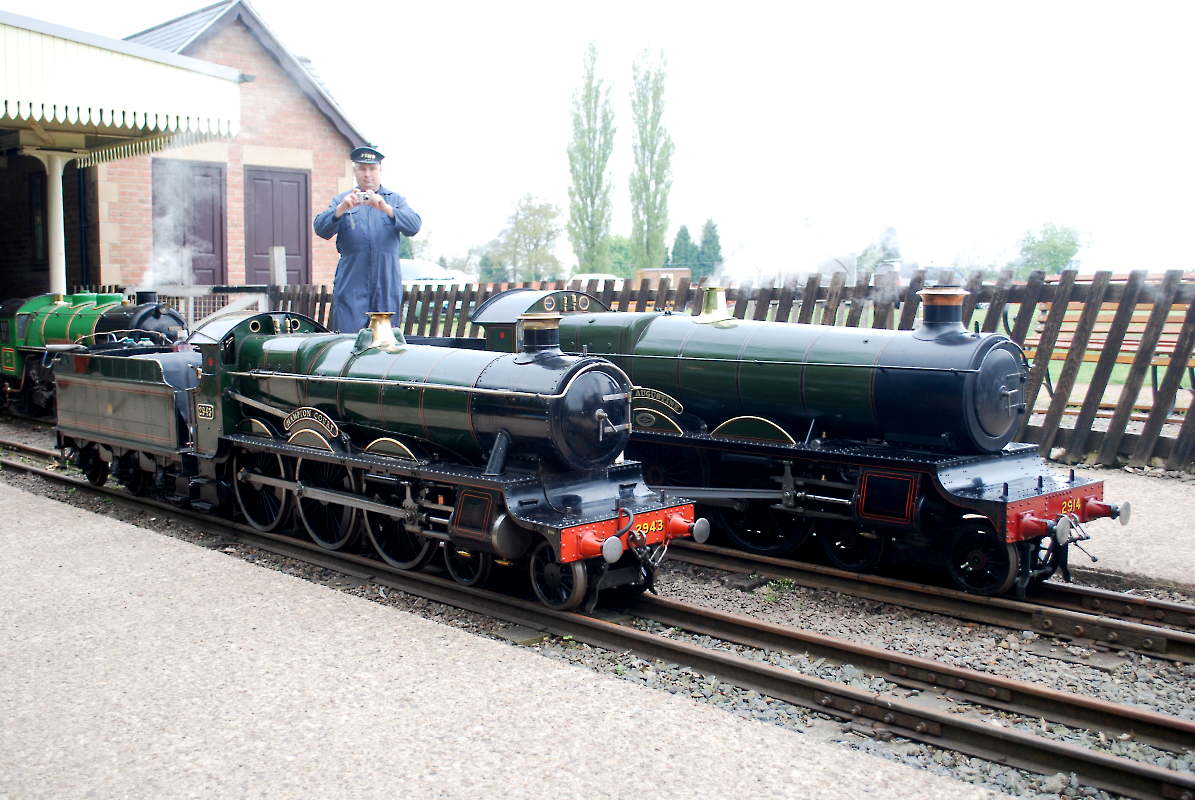 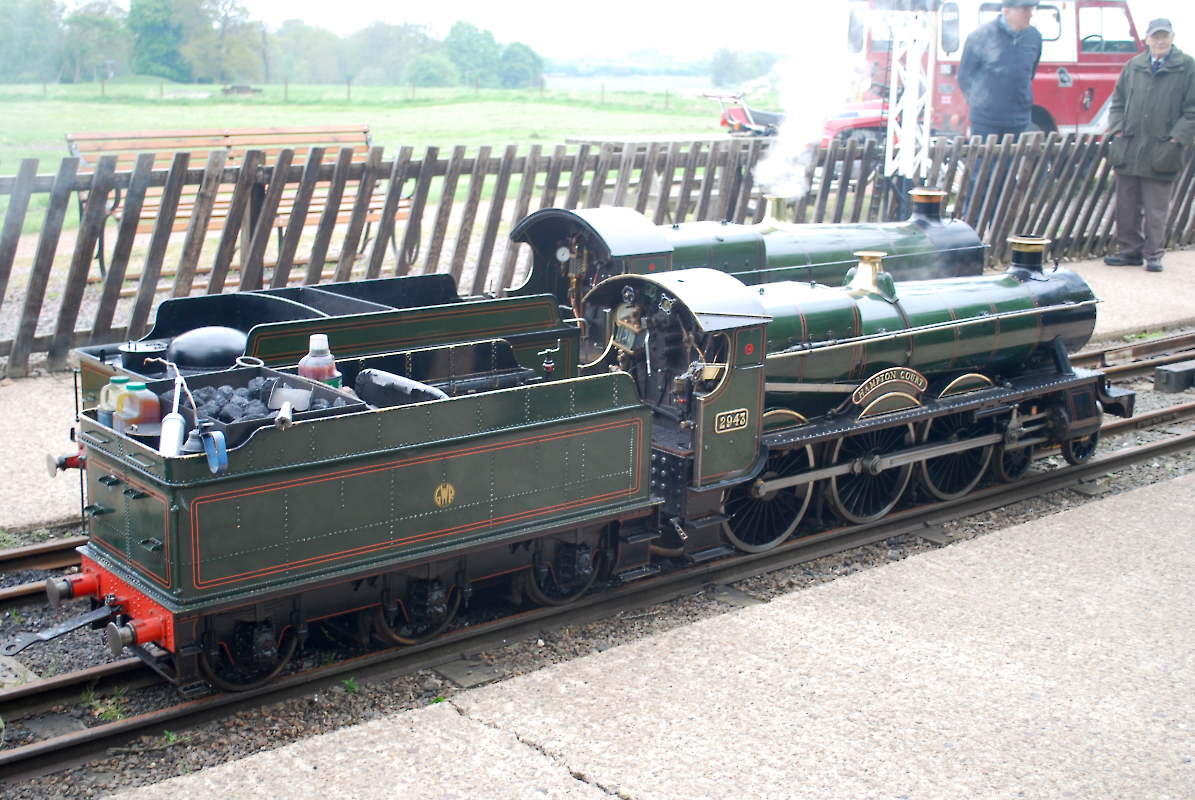 For those who haven't already seen it, there's a video of the day's exploits here. Sam and I had a really great time, we were made very welcome by everybody there - particular thanks to Richard Coleby and Bob Moore (whose workshop we ended up in at the end of the day, talking engines until way past going-home time). 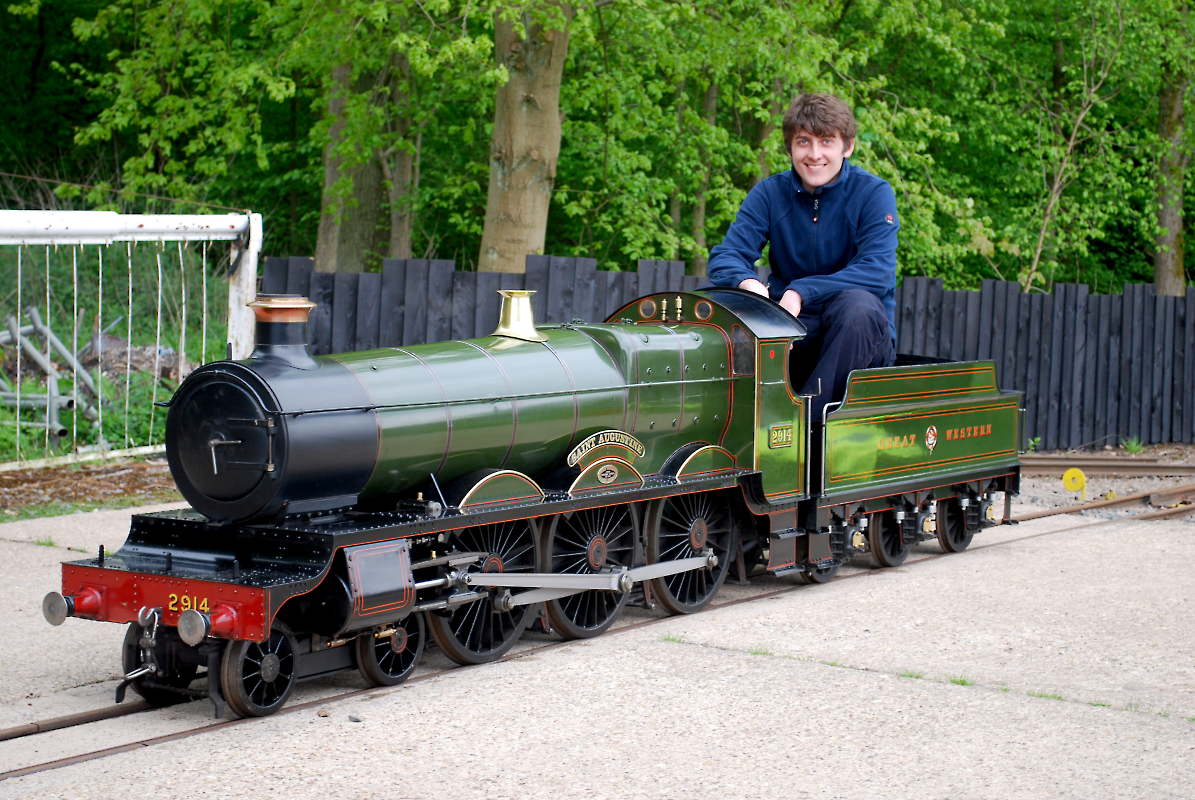