In preparation for the Fairbourne Railway's "Visiting Engines" gala, much midnight oil had been burnt on the Pacific getting it ready for a test run, scheduled for the evening of Whit Monday. The boy and I duly got up at the crack of dawn and drove over (via a quick stop at the Bala Lake Railway), arriving just before lunch.

Since last I had seen the engine it had acquired paint, draincocks, a whistle, tender springs, new water gauges and a tender coupling. They don't hang about up there! It had been pushed out into the steaming bays that morning for cleaning and, by the time Sam and I arrived, had already attracted much interest (and not a few photographers). I spent much of the day riding the line, trying to get an idea of where it went up and down and round corners before, at four o'clock, a little over an hour after lighting up and with the big engines put back in their sheds, the Pacific eased it's way out onto the traverser and down into the station.

The intention had been to couple a pair of open "toast rack" coaches on for a trial run up the line. However, after a fine day, Sod's Law got to work and a steady drizzle developed so two of the large covered carriages from the day's service train were put on and promptly filled with a collection of people, cameras, jacks, pinch bars and tools - all the usual stuff. With Barry at the regulator, we set off steadily up the line to see how far we would get. The Fairbourne's own engines run seriously large wheels with treads that look about two inches wide - I think they'd run on anything from 12 1/4 inch gauge to about 15 inches! The Pacific, in comparison, runs on near scale-width wheels and the concern was that we would have trouble keeping it on the rails. 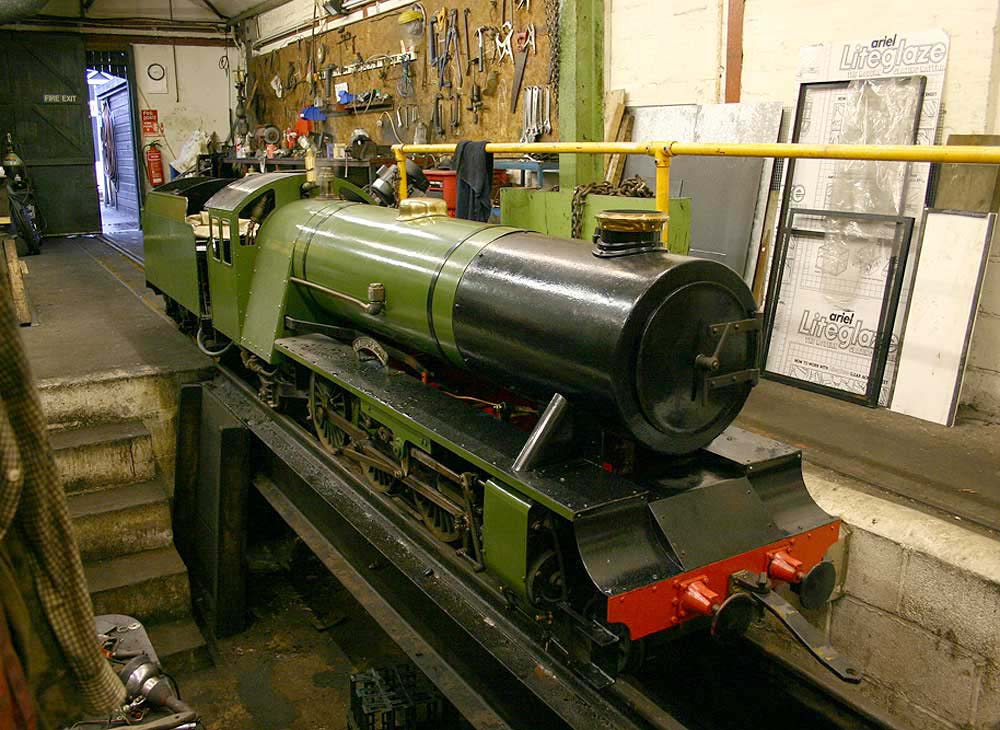 All went well to the half-way passing loop, running tender first. We had one minor incident with a tender wheel, quickly sorted out with a couple of big jacks. With half the party in the train and the remainder walking alongside (ostensibly to check for problems but, in reality, more interested in seeing the engine running at close quarters) we progressed at walking pace to the far end, with Barry being forced to stop in the tunnel so that the photographers could run round to the other end and get pictures of him bursting forth into the (fast dwindling) light. At Penrhyn Point, the far end of the line, we pushed the coaches down one side of the passing loop, ran the engine into the other and had it ready to set off on the return journey in a few minutes.

For the return trip the rain became more steady, Barry retired to the front coach and I got behind the regulator. I had already been surprised on the way up at the quiet running and dead square exhaust beats. The engine only ever did four seasons running in the 1950s - my initial inspection of the boiler in the workshop here seemed to bear that out - but the running gear, although grubby and with forty years surface rust, is in super condition as well. I took it very steady all the way back until we rounded the last corner onto the half mile "home straight" down to Fairbourne Station. Whilst care was  required traversing the ungated road crossings on this section, there was enough room to open the regulator a little more, getting a most satisfying surge from the old girl with beautifully chopped-off puffs of exhaust blowing away from the chimney in the cold, wet evening.

On arriving back at our starting point, the evening was declared a great success. The engine behaved better than we had hoped and expected and is now a definite for the upcoming gala, where it will run a "Vintage Fairbourne" shuttle up to the halfway loop and back through the weekend. After so many years hidden away, its very satisfying that the engine is now back in running order and on public display.

Much credit must go to the Fairbourne's chief engineer, Mike Messer and fitter Barry Snowball who did most of the work. It's a credit to both of them that the first run after so many years turned out so successfully. Thanks also to Messrs Melton & Atkinson for their hospitality, use of their super train set and the provision of a secure and comfortable berth for the engine.

The engine will live at Fairbourne, however it is unlikely to be steamed on a regular basis - so far the only outing scheduled for this year is the upcoming gala on June 12-13th. With the Welshpool & Llanfair and Bala Lake Railways en-route, the Talyllyn virtually next door and much of interest expected to be there on the day, it's well worth getting over there for that weekend.

(There will be more "action pictures" of the engine running on the line at the next update - I took these in the yard as it was being steamed, then left my camera in the workshop as I was required on footplate duties)