Spending a good deal of time overhauling a steady stream of Romuli, Bagnalls and Hunslets that came through the workshop, I had the idea two years ago of building a robust, powerful and easy to maintain 7 1/4 inch gauge engine, suitable for either larger garden railways or club running, combining the best features I've found on the hundreds of engines that have been through my hands over the last ten years whilst trying to eradicate the weaknesses.

A specification was mapped out and I talked to one or two possible builders for a batch - suffice to say that after wasting twelve months waiting for an outfit who pottered about producing small quantities of finished work and large quantities of excuses, I cancelled the contract having decided that, if you want a job doing you've got to do it yourself.

Having bought a new machining centre and CNC lathe to beef up the existing workshop kit (already owning a CNC Bridgeport mill I'd bought new several years ago) we set to designing the new locomotive. Never one for the easy life, at the same time I changed CAD systems from AutoCAD, which I'd used for the last fifteen years, to Alibre Design - one of the latest generation solid modelling packages. This required quite a shift in mindset - you tend to draw a block on screen and machine it away with the CAD tools to produce the part, exactly as you would make it in the workshop, rather than draw it from scratch in third angle projection, as I'd been used to doing up until then. 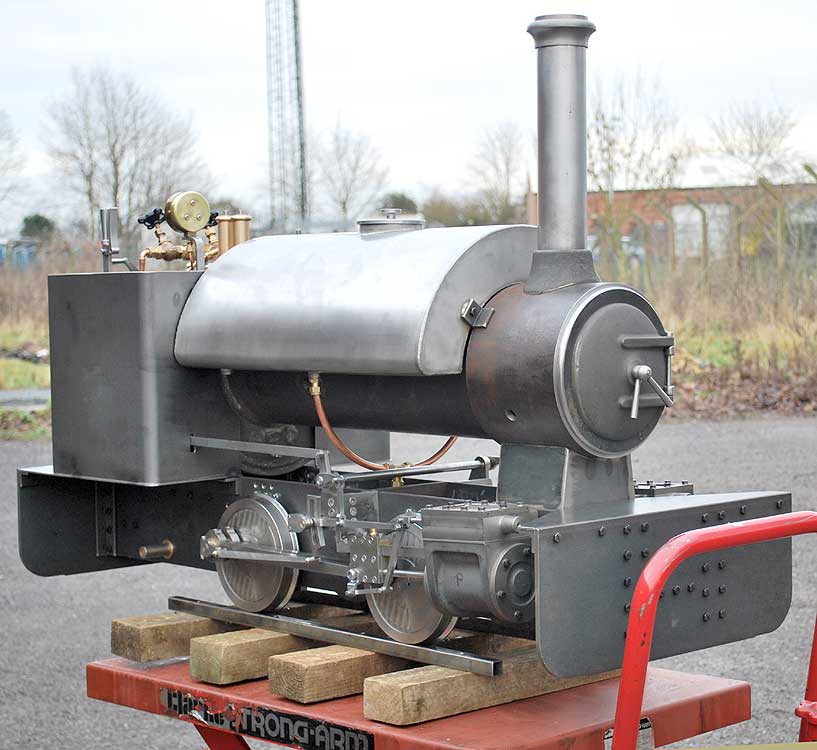 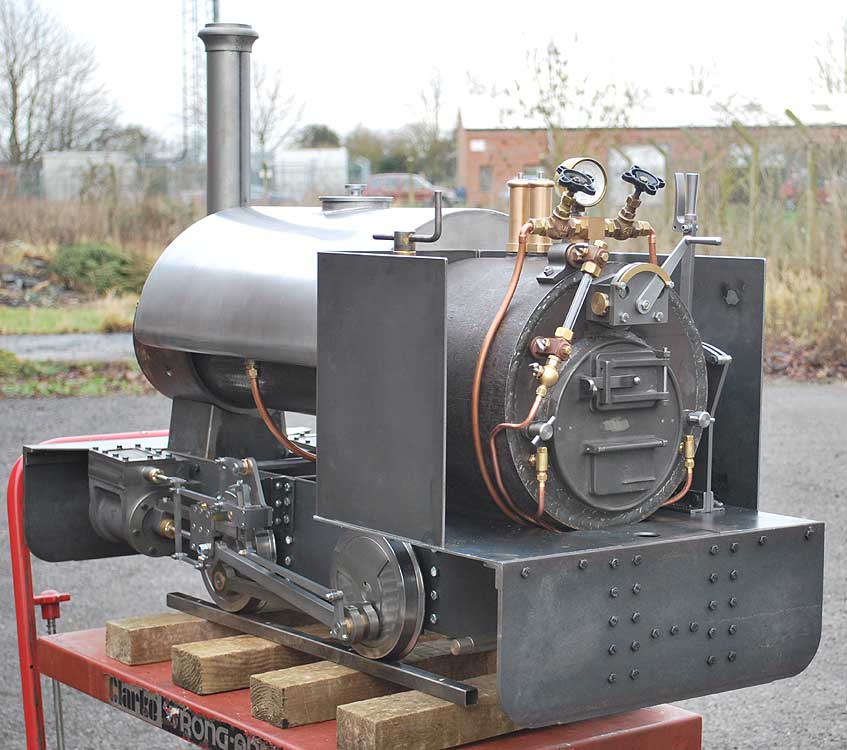 Taking a bit of a leap into the unknown, Geoff and I designed this engine from day one with Alibre, using it to produce workshop drawings and test assemble virtually everything before machining. I set out the valve gear using Don Ashton's formulae and associated spreadsheet by Alan Gettings before running it using Allan Wallace's excellent simulator to check valve events. 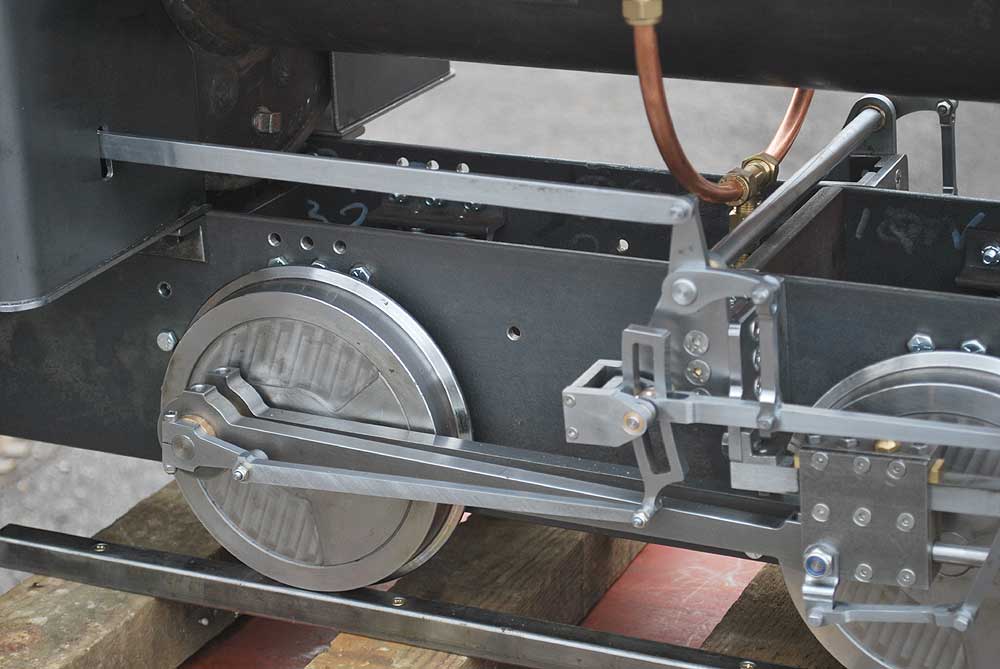 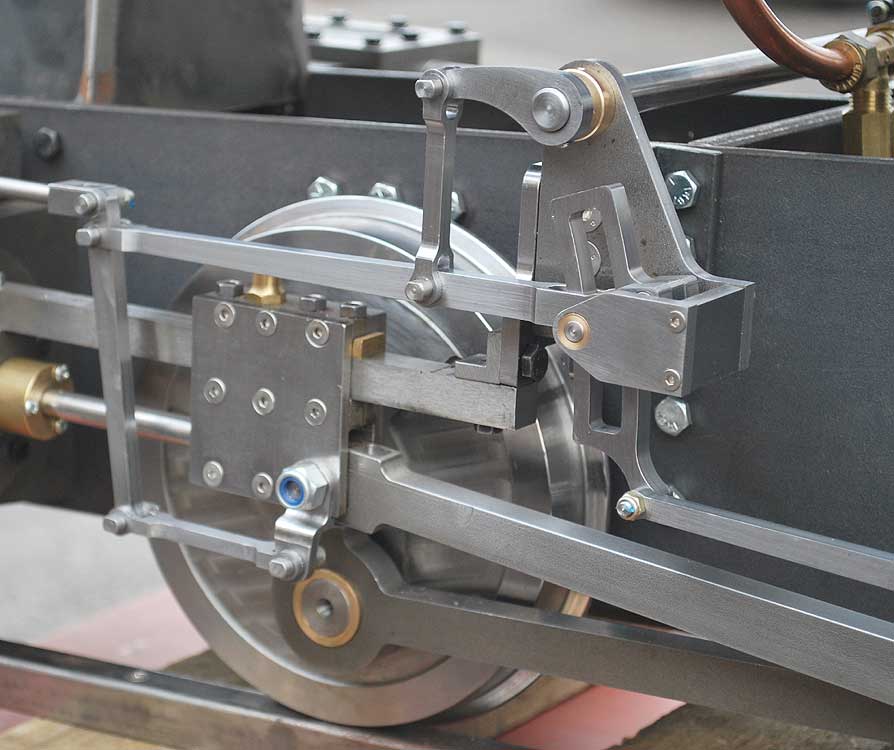 The parts were finally drawn up in Alibre and the assembly checked for collisions before machining on the VMC. It was more than a little satisfying that the engine was substantially completed bar paintwork in time to show at Alexandra Palace in January, twelve months after we started the project, the engine running on air "straight out of the box" (there's a short clip of the first time it ran here, in the excitement to open the regulator I forgot to plug in the camera microphone so what Geoff said when the wheels actually went round is lost to posterity). 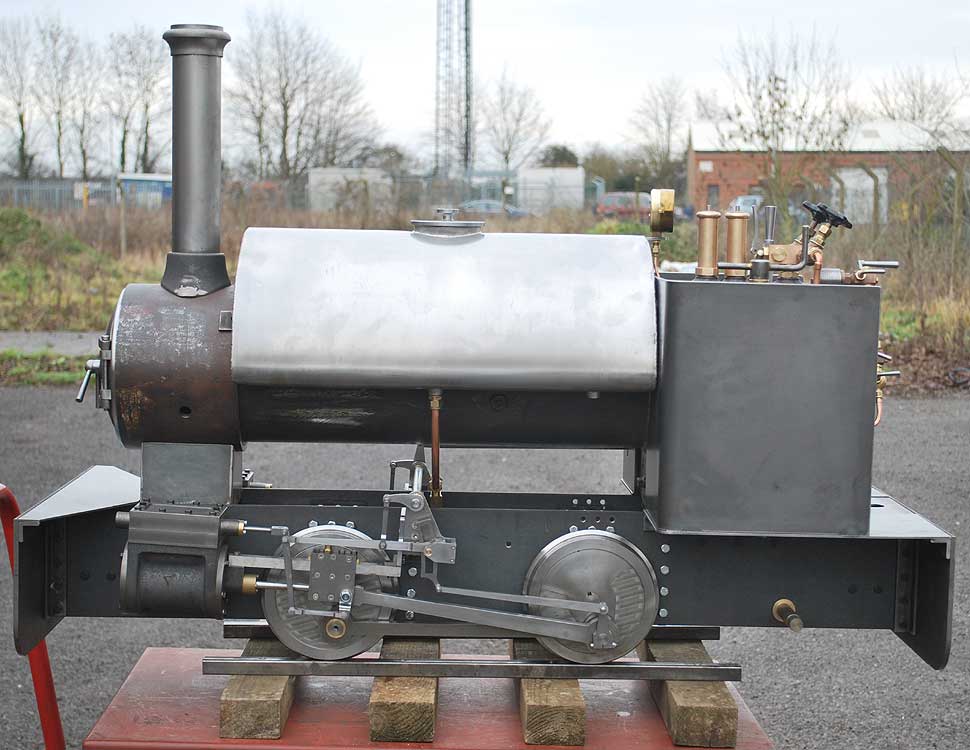 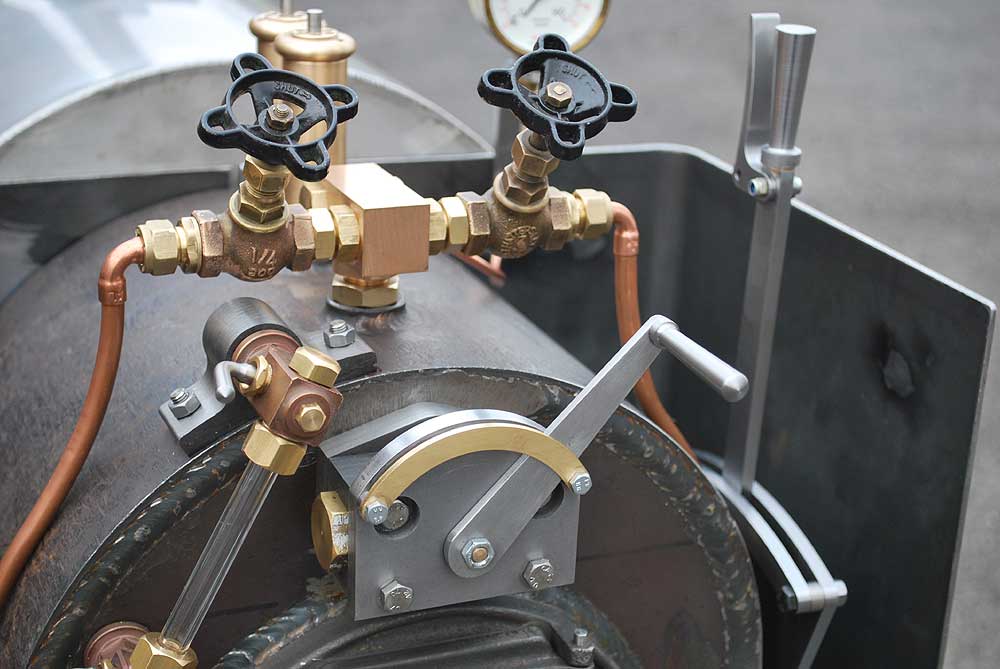 The design is along the lines of a freelance narrow gauge 0-4-0 tank engine, with a nod towards Bagnall's engines of the 1920s, giving a large engine to a notional 4 inch scale running on 7 1/4 inch gauge track. A marine boiler is used, a type I have found particularly free-steaming and easy to clean in things like Sweet Peas and Bagnalls - working pressure was set at 120psi, a pair of bronze pop safety valves are fitted to the design Geoff developed (and fitted as replacements with great success to a Fowler ploughing engine we had in a while ago with pathologically poor safety valves).

Valve gear is Walschaert's. Although not the cheapest or simplest to make, I like it for lots of reasons - it is very efficient, it gives a fast-opening exhaust whose blast, I believe, makes the boiler easier to handle, it notches up well which allows large full-gear cutoff for reliable starting (and there's nothing worse than seeing 7 1/4 inch gauge engines requiring assistance from the driver's foot to get off a "dead spot" leaving the station with a loaded train) whilst still allowing for economical high-speed running. And it's also quite the best looking valve gear ever made.

The rest of it is specified for robustness and ease of maintenance - sealed self-aligning roller bearing axle boxes, TIG-welded stainless steel water tank, stainless ball valve regulator and injector water valves, full-sized bronze steam valves, steel wheels, cast iron cylinders fitted with Clupet rings. Whilst the detail design and any errors therein are mine alone, it is only fair to say that Giles Favell has been a great source of inspiration and information (probably more than he knows and certainly less than he's been thanked for) both with his half sized Bagnall "Alice" and the current "No.2" currently under build. 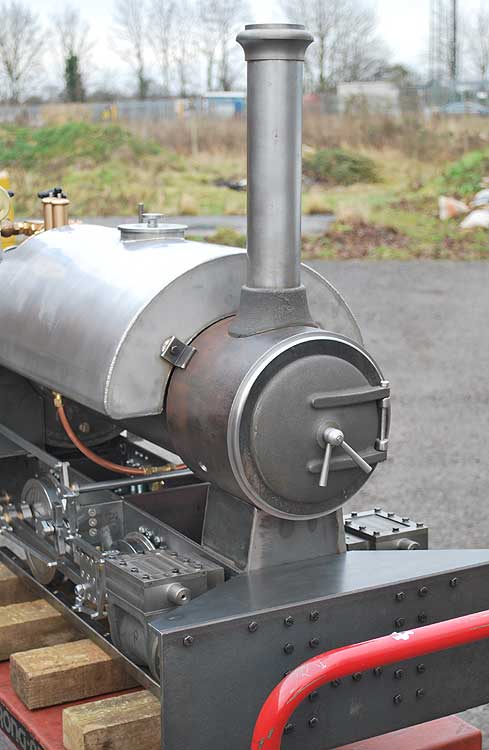 The pictures above were taken on a cold morning late last year, with one of the current batch of four engines getting ready to go to the London Model Engineer Exhibition.