One of the projects we've been working on over the last few months has been design of a steam indicator - initially for use in the workshop here, developing new engines and debugging old ones. For some time I have thought about using a pressure transducer and position sensor to provide data from which a laptop PC could produce indicator diagrams. Having set out the Walschaerts gear for Stafford, produced diagrams from a valve gear simulator, machined up the bits and then made and driven the resulting locomotive, I was interested to know how close the actual matches the theoretical.

To take my ideas and turn them into something concrete, we commissioned the Taylor-Kellar Partnership to develop suitable hardware and software, then produce a pair of prototype indicators. Initial development was done using a model beam engine (which ended up, in the interests of testing the hardware, spending long periods running at speeds that would have Mr Stuart Turner revolving in his grave!) before moving over onto our Stafford demonstrator. Since many of the tests were conducted on our rolling road, often requiring the engine to be run under heavy load at large regulator openings with different cutoffs, brake blocks became a bit of a consumable item!

The indicator works by recording the changing cylinder pressure at various positions of the piston. A pressure transducer is connected to the cylinder by a short pipe, with a reflective spot on a wheel read by an optical sensor to give a dead centre mark from which the position of the piston is interpolated. When we first started getting results, the first thing you find is a) you might have thought you knew how an indicator works, but you don't really and, b) real indicator diagrams don't look that much like the "airbrushed" ones you get in books (which, in fairness, my 1906 copy of "Hawkins Treatise of the Steam Indicator" does admit to in small print at the back of the book). 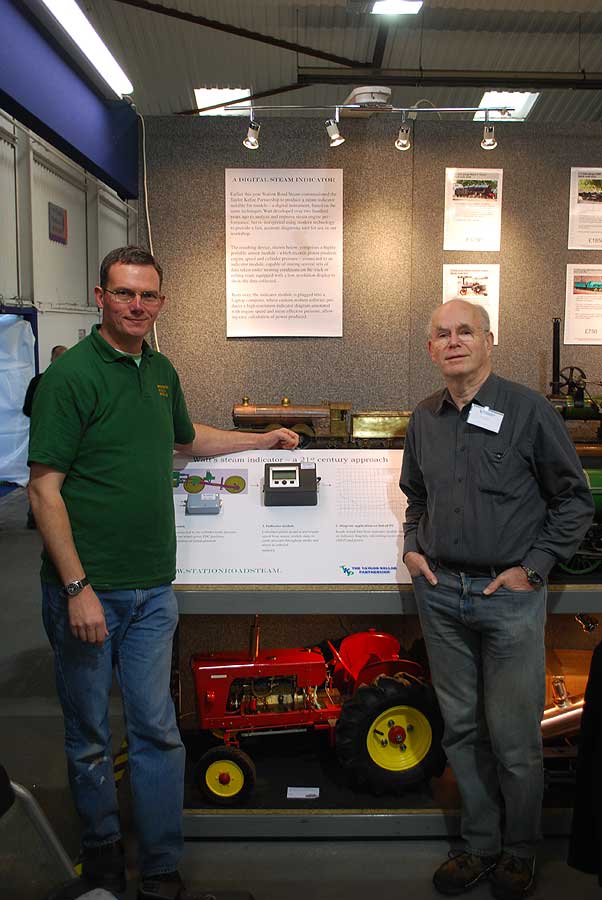 In the early stages you get buried in a huge amount of information, we ran around like kids in a sweet shop running engines at different loads, speeds, watching the effect of the governor on a stationary engine, seeing the inlet line wilt on the beam engine which we now know has run for 25 years with an undersized steam pipe, being mystified by spikes in the exhaust line on a locomotive until we realised it was the exhaust opening on the other cylinder reflecting back into the cylinder under investigation... We were even in the workshop late at night with a Stafford in steam under test two days before the Midlands Show, when we'd really got better things to be doing (like packing the vans...).

If you visited us at the show you will have seen the indicator (the clean one that is, the working one having spent too long sitting beside hot and hard-working engines to be seen in public). I had interesting talks with a number of people involved either in new-build or restoration work on all sizes of engines up to two foot gauge - even one serious IMLEC contender who wanted to buy the unit off the stand.

For the time being, it remains an ongoing research project with the prototype indicator in use in our workshop - however Paul Kellar of TKP was in attendance on several of the days of the show, which gave us both the chance to discuss future developments, with, given the interest shown, the possibility of a production version in the New Year.