It was flat out in the workshop before Christmas, and likely to be busy through much of January as well, with the London Model Engineering Exhibition at the end of the month. I'm aware that I haven't managed to update the news page since August, I can't face coming back in the new year with last summer's news staring me in the face!

From the above (and, indeed, from your own experience if you'd tried to get hold of me recently) you can probably deduce that this year has been our busiest yet. Whilst by and large this is welcome (and, indeed, we don't take it for granted), at times it has tested us to breaking point - there have been days when there are four crates and two pallets to be packed and collected for mid-afternoon, forty emails waiting (im)patiently in the in folder, a dozen phone message blinking on the machine - and the boiler inspector due in two days, with half a dozen engines to test...

We had a good time at the Midlands Show in October, our first time exhibiting there (although I have attended regularly, either as a visitor or staffing the Stamford SME stand, in the past).

Steve and I made up a list of engines we'd like to take the week before - even after trying to be a bit sensible we ended up with thirty engines there which, whilst requiring military-like planning to crate, lift, transport and get onto the benches (not to mention getting them all home again), certainly made for an interesting cross-section of things to look at. Having tried for the first couple of days to get a photograph (all I could get was a panoramic view of people's backs, we rarely had a time when you could get a clear view of the stand), this one was taken early one morning before the doors opened. 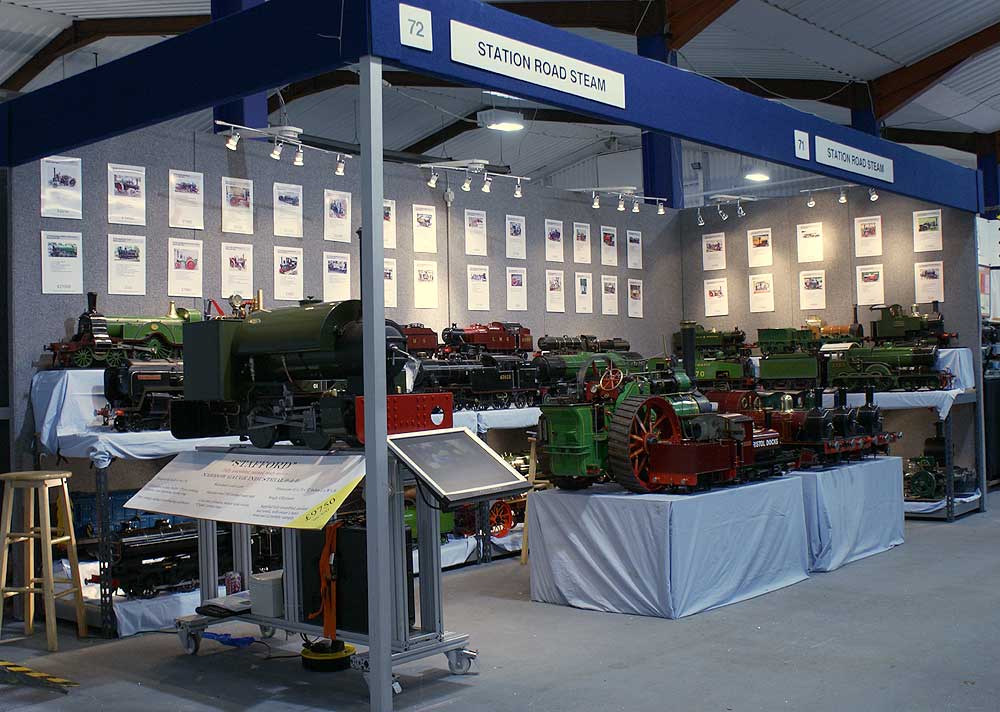 In the workshop Geoff and I have spent much of our time working on the new-build locomotive "Stafford" we showed in finished form at Warwick . The first engine, having been round my club track so many times it not only knew which way to go but also how to drop its own fire and get back in the van at the end of the day, now serves as a demonstrator/loan engine. The remainder of the first batch sold rapidly after the show, we are starting the next batch as soon as we get back from the London Show at Alexandra Palace in January.