A short news page this month - as anybody who's been trying to contact me for the last few weeks will know, the workshop has become pretty much a 24/7 operation, to the detriment of both correspondence and, it must be said, website updates.

After considerable thought, I have started publishing the workshop telephone number on the site (it's on the home page, 01526 328772) - until now it's been kept a dark secret, which lets us get on with things uninterrupted "down at t'mill" as it were.Email is still the best way to get hold of me (inasmuch as you will generally get a more thoughtful, carefully reasoned answer than the one I give if I'm watching something happening on a milling machine out of the corner of my eye). However, for those things that just can't wait, and on the understanding you might get a relatively terse reply, do feel free to call on this number.

Among the thousand and one other jobs in the workshop at the moment, we're busy getting ready for the London Model Engineering Exhibition held on 16-18th of January. Iâ€™ve been visiting the London Shows since a nipper, I remember queuing up to get in with my father when they were at Wembley in the 1970s. It's moved about over the years, Wembley, Olympia, Pickets Lock but in recent times has been held at Alexandra Palace which is a super venue. This is the first time we've exhibited there, we're on stand 55/56 - do come and say hello, there should be plenty of engines to have a look at.

Self storage has become one of the great growth industries in the last few years, there seem to be garish bright yellow or blue painted windowless warehouses springing up all over the place where for twenty quid a week you can store a few cubic metres of stuff you should really take down the tip. Seems a strange business to be in, but it obviously fulfills a need.

The phenomenon now seems to have spread to Lincolnshire, and to our industrial estate in particular, where I have inadvertently become a bit of a self-storage emporium myself over the last year or two. It started innocently enough - "if I send you a cheque for the widget, stock code 1234 on your website, could you hang onto it until I/my brother/a friend of my wife's/somebody as yet unknown to me but who may one day be passing your place, could pick it up for me". Genial people that we are, the answer has generally been "yes, of course". Sometimes, given the modest cost of shipping, it seemed odd to leave an item here on the off-chance it could be collected, but who am I to argue.

However, in the last year or two, things have started to get out of hand. I now regularly advertise something for sale only for it to be bought within a day or two, then left here for months - or longer. Currently on the shelves, to name just a few examples, are a complete, running (and very heavy) LNER Pacific which was bought and paid for in 2006, a steam pump and several piles of track all of which sold over a year ago and a large driving truck that I trip over daily, due to go to Somerset in 2006 but has been awaiting a much-postponed collection by its owner during a long-planned family visit to somewhere near here.

When we first moved to the new unit space was not an issue, as time has gone on the racks get fuller and fuller, at the moment we're bursting at the seams with engines, boilers, sets of castings, bits and pieces - I spent two hours yesterday simply rearranging things so that some chap could get in to see a four inch scale Showmans engine (which was behind two other four inch engines, in front of a 4 1/2 inch roller which itself is barricaded in by a pair of coaches which sold - in May...)

I've agonized long and hard about the problem, which has been brought to a head in recent weeks with one half of the premises now dedicated to the workshop and manufacturing things, increasing pressure on the "stores" in the other half. Long term solution is a new unit to be built on the land next door, which will give me half as much space again - however in the meantime "something must be done" (as they say in government).

So - in future, could I respectfully ask that all goods are cleared within one month from date of invoice. 98% of items sold from here can be shipped to your door - everything from a handful of castings in a Jiffy bag to a 3 inch scale traction engine on a pallet have gone out in the last month. Cost of shipping regularly surprises people - it's modest and often less than the cost of petrol to come and see us.

If things have to be left here for more than a month for whatever reason please let me know in advance. First month's storage is free of charge, thereafter you will be charged a flat rate of £20/month storage per pallet or part thereof for a maximum of three months. After this, the item will be re-listed for sale on the website!

Things are rather packed in at the moment, a result of lots of engines arriving while Geoff and I are head down in the workshop, so website updates have been on a back burner. 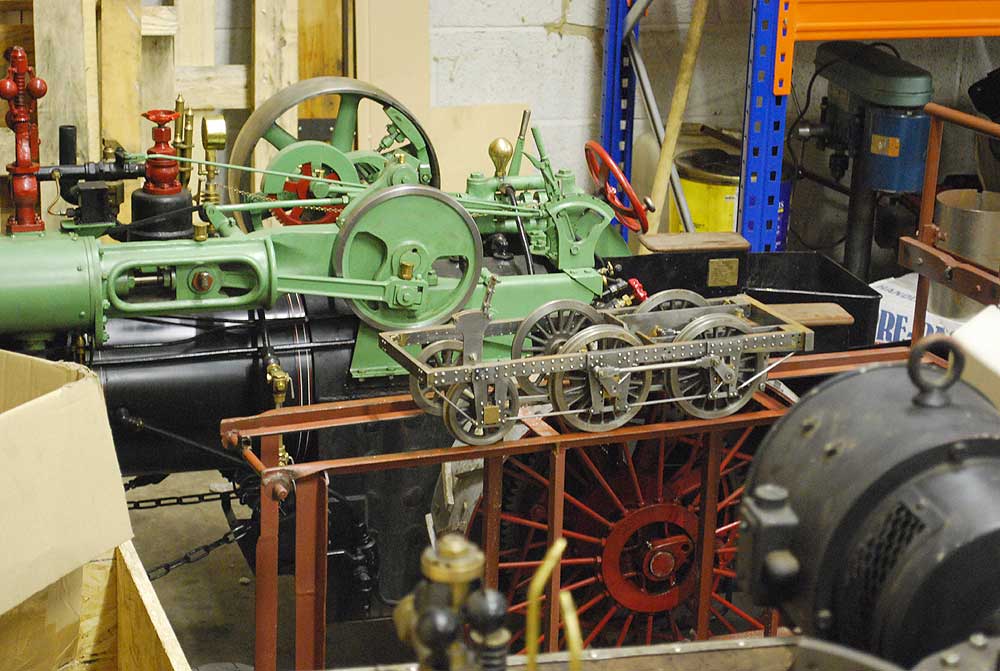 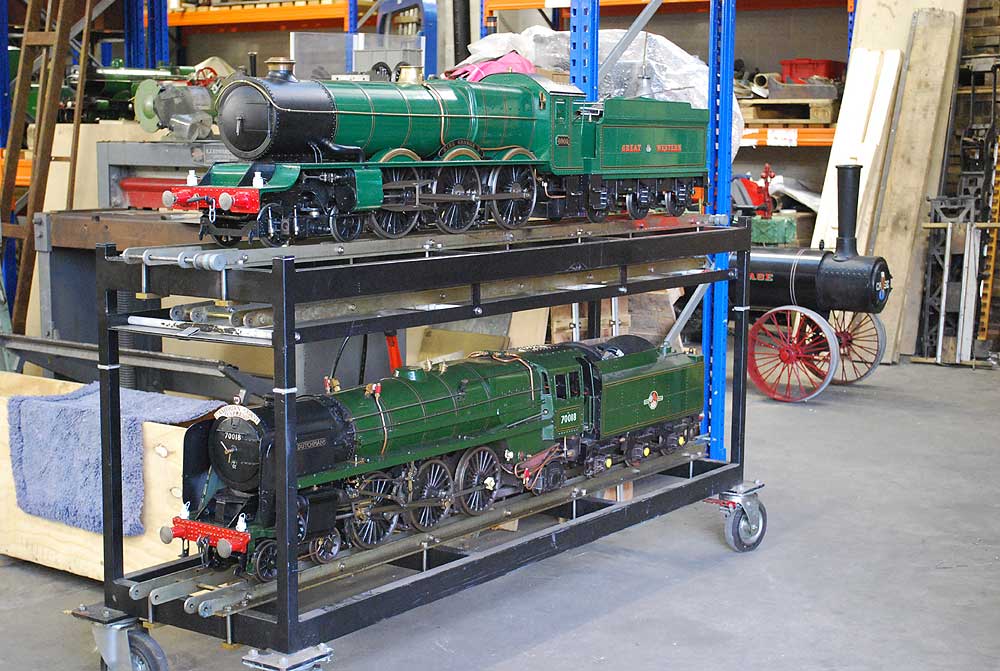 The pictures give something of an idea of the situation, at some stage soon I need to find an hour or two (!) to photograph and list: 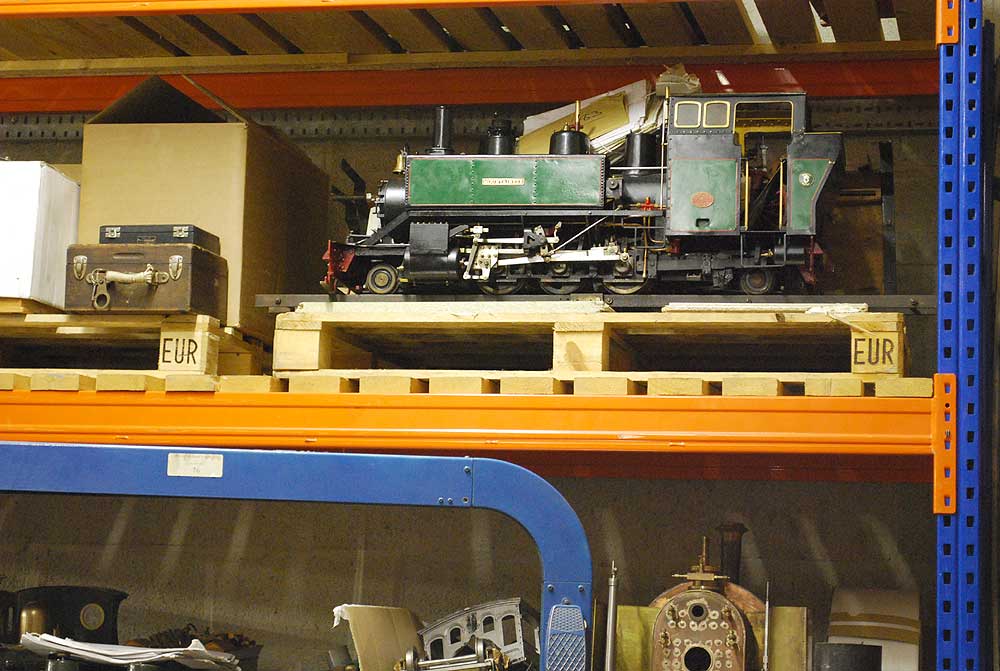 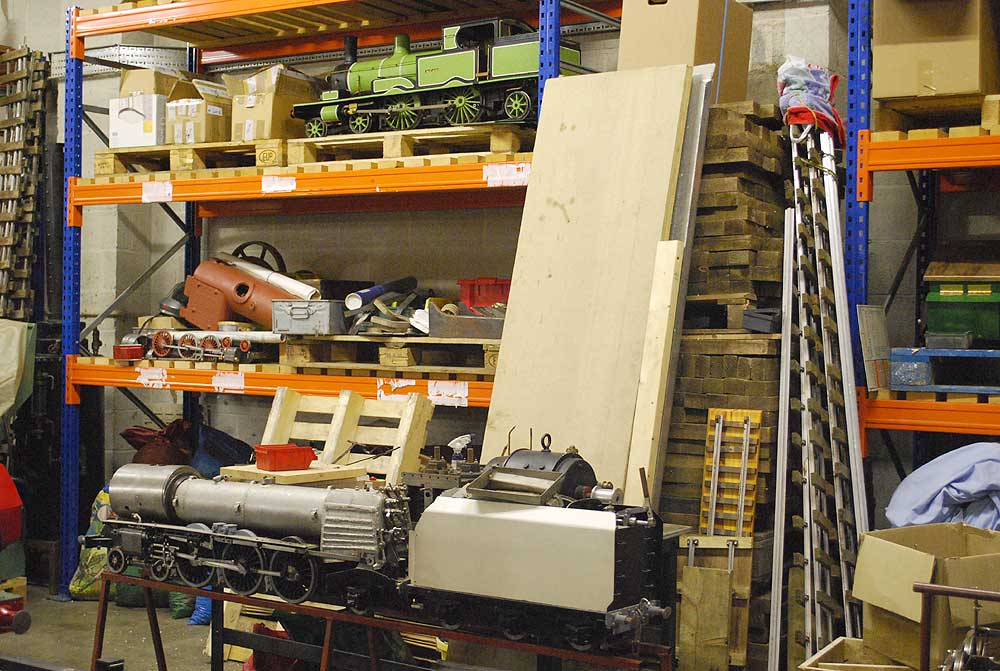