It's been a busy couple of months in the workshop so, as ever, the website updates have suffered as a result. You may remember from the last news page that a new machining centre had just arrived, leaving me with four huge manuals to read and a workshop to rearrange. Filled with enthusiasm at shuffling everything around, it seemed like a good time to knock down one of the toilets to make a little kitchen, put a new hot water system in, install a security door inside the lobby which I've been meaning to do for the last eighteen months and replace the windows in all three units given that the old ones were looking pretty motheaten and winter is a-coming. Oh yes, and read all the manuals...

What started as a couple of small jobs ended up occupying me, Dal the builder, Brian the decorator and Graham the electrician for about a month - however I have now got draught-free windows and hot water on tap in both the kitchen and workshop.

I'm starting to get the hang of the new mill, it still seems to take twice as long to set up as the Bridgeport but then works at four times the speed when it's going. The speed the table rapids between points on the job was a bit intimidating to start with, now I've got used to it the Bridgeport looks positively pedestrian.

The only problem with having a new machine is it makes all the old ones look, well, a bit old. Having seen how much the software had come on in seven years between the Bridgeport and the new VMC, I took the plunge and ordered a new lathe to replace the recently acquired Triumph. It's a similar sized machine, D1-6 spindle, 2500rpm top speed, but a fully-enclosed, CNC version. First time in my life I've bought a new lathe, it arrived on Tuesday morning and hasn't even got a wire on it yet. Mercifully it comes with one slim manual rather than the four phone books for the mill. 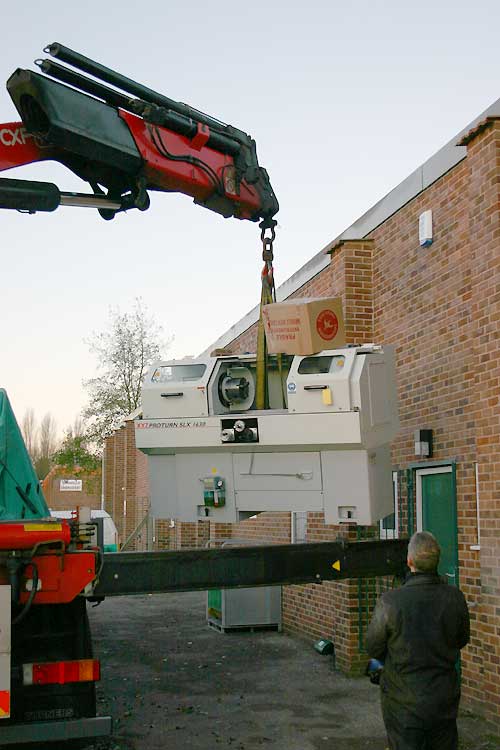 As always, having an experienced man driving the crane makes the job very easy - our man unloaded the lathe and positioned it within an inch of the marks on the floor in about ten minutes flat! 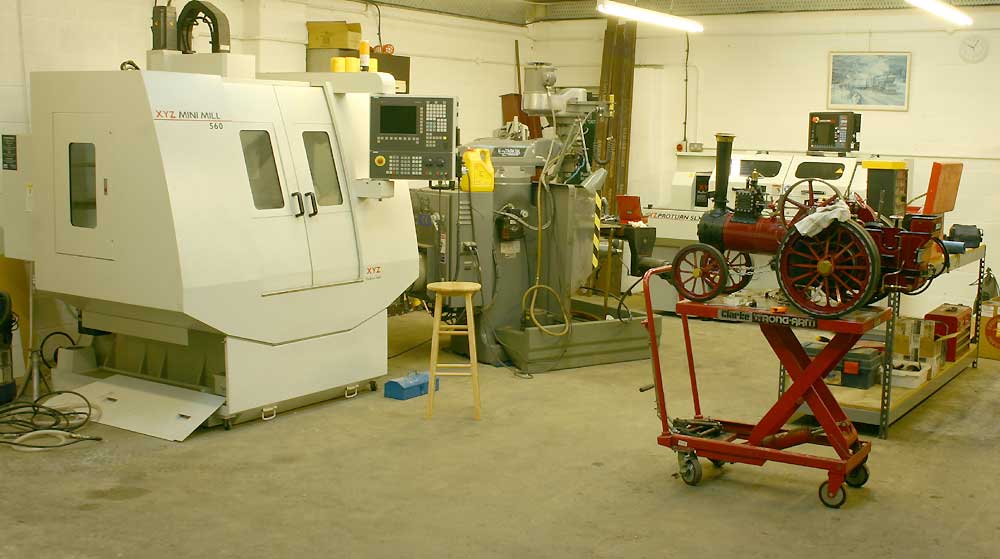 Bought as a replacement for the Triumph 2000, this is an SLX1630 Proturn lathe - rather like my Bridgeport EZ-Trak it's a hybrid machine, it can work as both a manual or CNC lathe. I bought it after going to the company's open day at Nuneaton - an excellent day out (quite apart from the excellent spread of food and drink they laid on!) with all their machines running demonstrations all day.

Interestingly, given that the demo centre is carpetted throughout, none of the machines is run with coolant (makes too much mess), the lathe was turning lumps of EN8 into the widgets pictured below, throwing sparks from the disposable tipped cutting tool all the while. To my surprise, at the end of the cycle the work was no more than warm to the touch.