When I moved up here, the original idea for the line was a narrow-gauge railway worked by one of the Romuli then resident. Things got a little more ambitious with the arrival of a Tinkerbell (and gaining approval from the domestic authorities for an even longer run, extending up around the old tennis court). Shortly after the Tinkerbell arrived, I acquired a large petrol-hydraulic shunter with ride-in tender, built for commercial duty and fitted for air and vacuum brakes - an ideal tool for winter works trains! 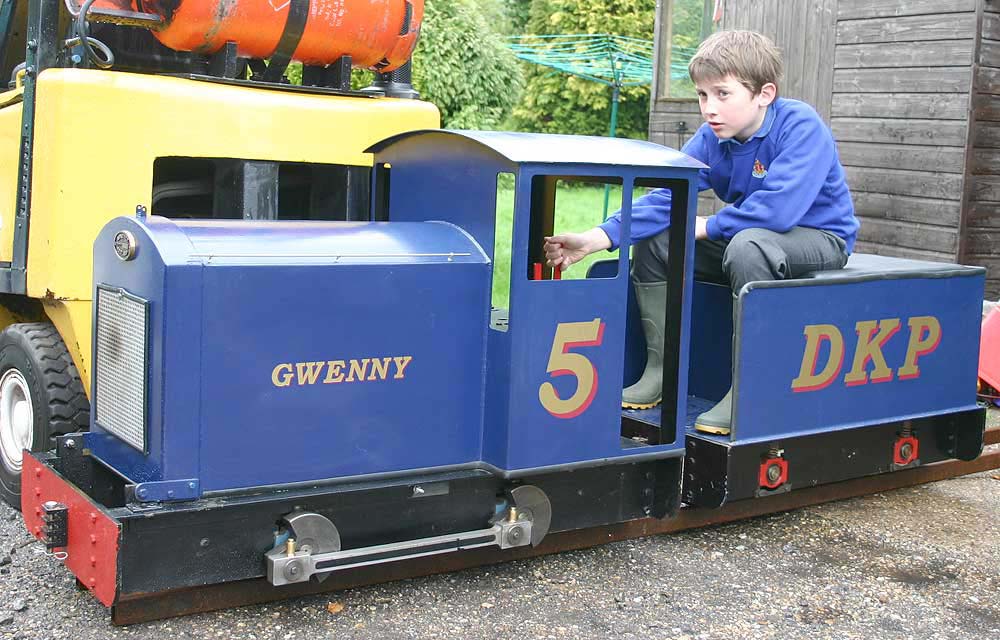 In my usual way, things started to get a little out of hand on the motive power front with the arrival of a pair of one third size Hunslets at the end of October - at which point we must digress into a little story...

Many years ago, when I was still in short trousers and doing a paper round before school every morning, Milner Engineering of Chester began to produce miniature locomotives, the first of which were four inch scale Quarry Hunslets. I sent off for their brochure and, having divided the price by my weekly paper-round money, found out that I would be retired by the time I could afford one. After several fruitless weeks nagging father to buy one, I gave up and put the brochure in the bottom drawer.

Over the years Milner produced over one hundred Hunslets, however the first two, which had been built for a private railway in Lancashire, stayed with their original owner until his demise in 2003. The complete collection came up for sale and I, along with many others, went to look. Many of the engines were, by this stage, in poor condition including two or three items deemed of "heritage status" by the society who had agreed to list and value the collection for the gentleman's widow. Tantalisingly, having finally got so close to the engines from my brochure of thirty years before, I didn't get the collection. Over the following months, bits and pieces of it were sold off before the bulk of it ended up many miles from home at an auction on the South Coast.

Having had a year to mull it over, I went down "armed and dangerous" as it were, determined that at least one of the Hunslets was coming back for the railway here whatever it cost. No.2 "Pendlewitch" was in much the poorer condition of the two, needing a boiler and reassembly but, Sod's Law being what it is, this engine came up for sale first. I bought it as a safety precaution, on the off-chance that Bill Gates took a shine to Milner's No.1 and started bidding. 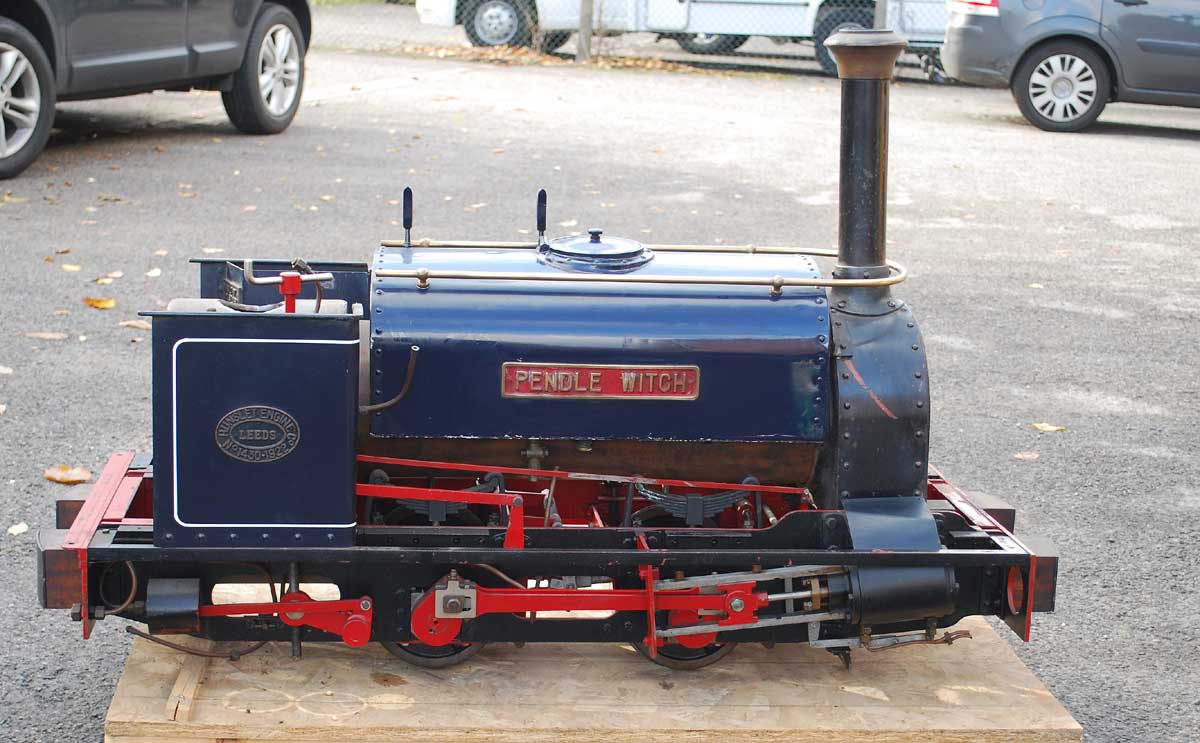 As it was, despite some fairly spirited opposition, I managed to secure No.1 "Moel Fammau" as well - recently re-boilered and in good mechanical order (although pretty filthy). 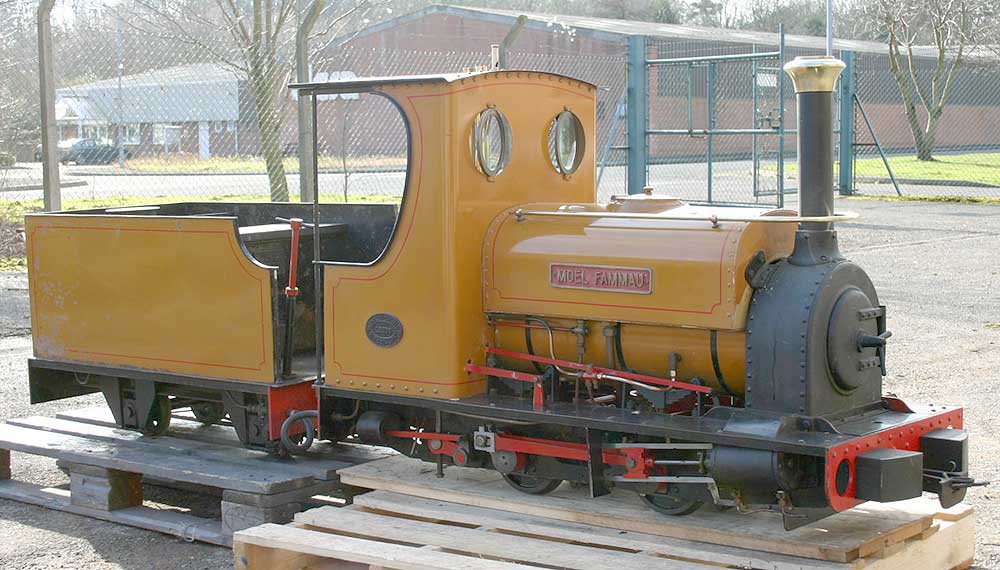 The slightly ironic postscript to the story was that, at the time I first saw the collection, it included the unique Cromar White GWR railcar, comprising a vertical boiler and Stuart single cylinder engine in a wooden body. This had been deemed of historical value and a high price put on it accordingly. Along with a couple other of the "historical" items, it put a disproportionate value on the complete collection. When the railcar finally came to auction, it made a little over one tenth of the original valuation.

At this point, whilst the railway was starting to look a little heavy on motive power, with five locomotives competing for two/three spaces in the engine shed, things were about to get a lot worse...

Friend Joe Nemeth, builder of the superb Oldown Miniature Railway found in October that the owner of Oldown Country Park had decided to retire and close at the end of the year. After a brief two seasons working, the whole railway was pulled up at the end of the year and the track transferred to another park for a new railway to be built this Spring. Whilst removing the railway, Joe got the chance to buy a pair of 10 1/4 inch gauge engines, one of which he had known since childhood, the first engine built by David Curwen and of (genuine) historical interest. In a frenzied few days with he and I driving all around the countryside in his lorry and my van, he gained a half-size Hunslet and the Pacific whilst I acquired all the ex-Oldown Locomotives and a couple of tons of track. "James" is the Tinkerbell Joe himself built, the nicest one I've ever come across and the inspiration for me to buy my own Tinkerbell before Christmas. "Taw" is a third size replica of one of the Lynton & Barnstaple Manning Wardle 2-6-2s, a large, very powerful engine weighing in at almost a ton.

All very well, but now sitting in the stable is a Romulus, two Tinkerbells, the Manning Wardle, two Milner Hunslets and the petrol-hydraulic, all putatively ear-marked for the railway at the time of purchase. Something must be done (if only because some day soon Mrs P is going to open the stable door and have a dicky fit). Thoughts at the moment are to get shot of: green Tinkerbell (made redundant by James),  the Manning Wardle (beautifully made but too big to go round my 25 foot curves, plus several people know it from Oldown and have already made enquiries) and the Romulus which is now too small (!). It leaves the Milner Hunslets in a tricky situation as they too are really too small yet look very quaint (and will make my father happy when he sees them running round the garden).