SRS Blog > Boilers and the CE mark - it's not rocket science...

Topics: , Boilers & boiler testing.
As you might imagine, we see quite a lot of boiler certificates here. Most are genuine (although we get a good few fancy printed bits of paper purporting to be evidence of a test, but more usually evidence of somebody's urgent desire to sell something that leaks like a colander! You can usually spot them by the illegible "inspector's" signature and little by way of when, where or by whom the test was conducted).
One of the questions we're asked most often concerns CE-marking - what needs it, what doesn't (and what on earth is a CE mark anyway?)
When we design and build boilers here, we have to submit drawings to a notified body (British Engineering Services in our case), along with a method statement - a document that describes how we're going to make the boiler. If I've done my job right, we get a sheaf of documents back with a red stamp on each page to show it's been approved.
We then manufacture the boilers and test them. The CE mark we affix to the finished boilers is simply a way of indicating that we have built the boiler to the design we had approved, using the material and method agreed.
So, all in all, it's quite a good thing. Only applies to commercially made boilers - amateurs get a special dispensation if they are making boilers just for themselves.
The date to remember is 30 May 2002 - every commercially built boiler made after then must carry a CE mark. If it doesn't, then it can't be tested by your club inspector (and to be honest, even testing it commercially is pretty painful, involving a notified body to retrospectively approve both the design and test the material from which it's been made, which is time-consuming and expensive).
This isn't really news - we club boiler inspectors were all informed in writing some years ago by the relevant body (in my case the Southern Federation). Despite that, we still get boilers slipping through the net - which, if an engine has changed hands since being tested, often leaves the new owner with a large bill for a new boiler.
We've recently taken in a 3 1/2 inch gauge locomotive with a commercially built boiler - in this case by John Ellis, a fine boilermaker who has built over one thousand excellent boilers. The man it came from had bought it in 2017 from a chap who had it hydraulic tested by a club before sale - they issued a certificate for same: 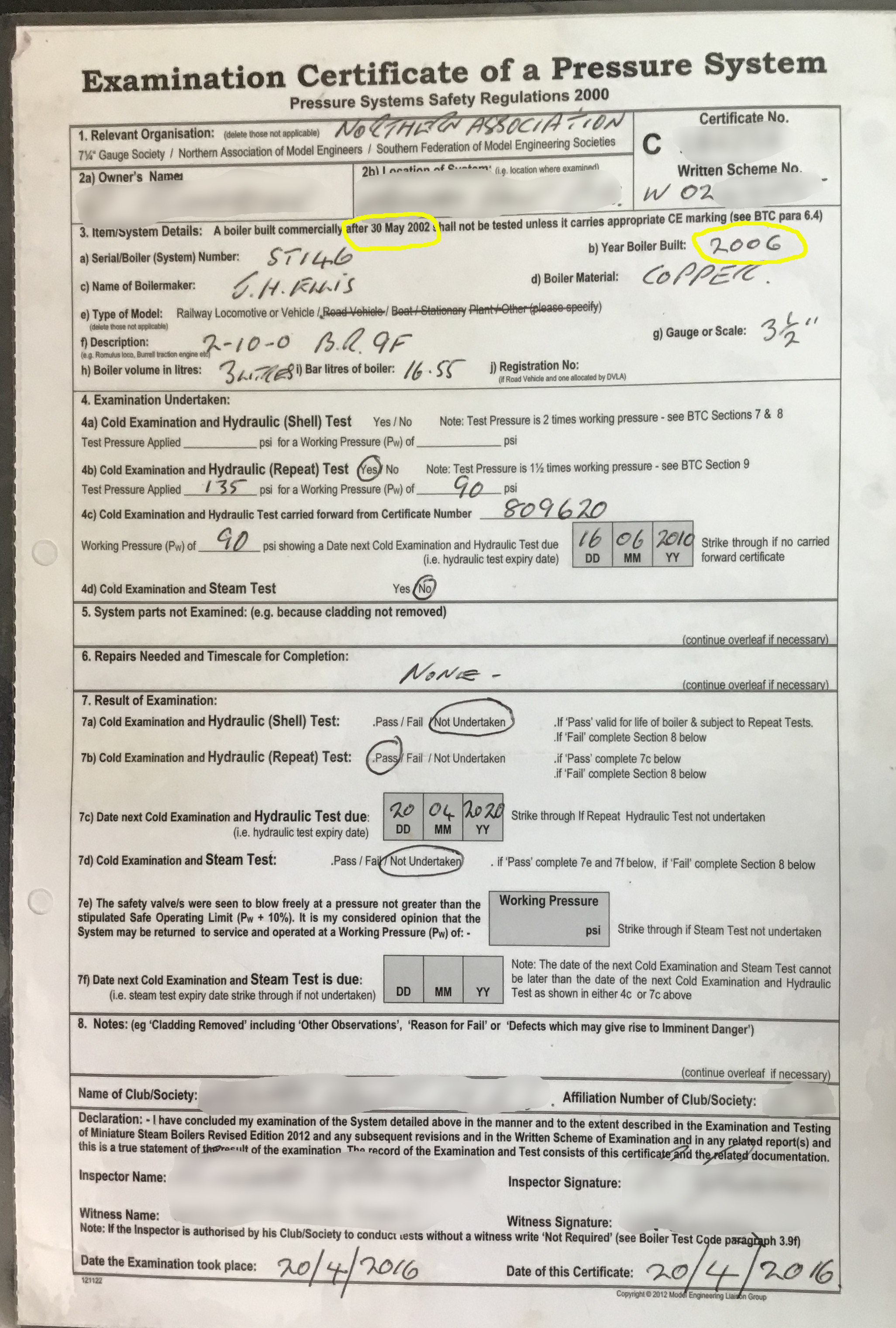 The engine then went off to a commercial outfit for recommissioning, coming back with a certificate for steam test from a different club. 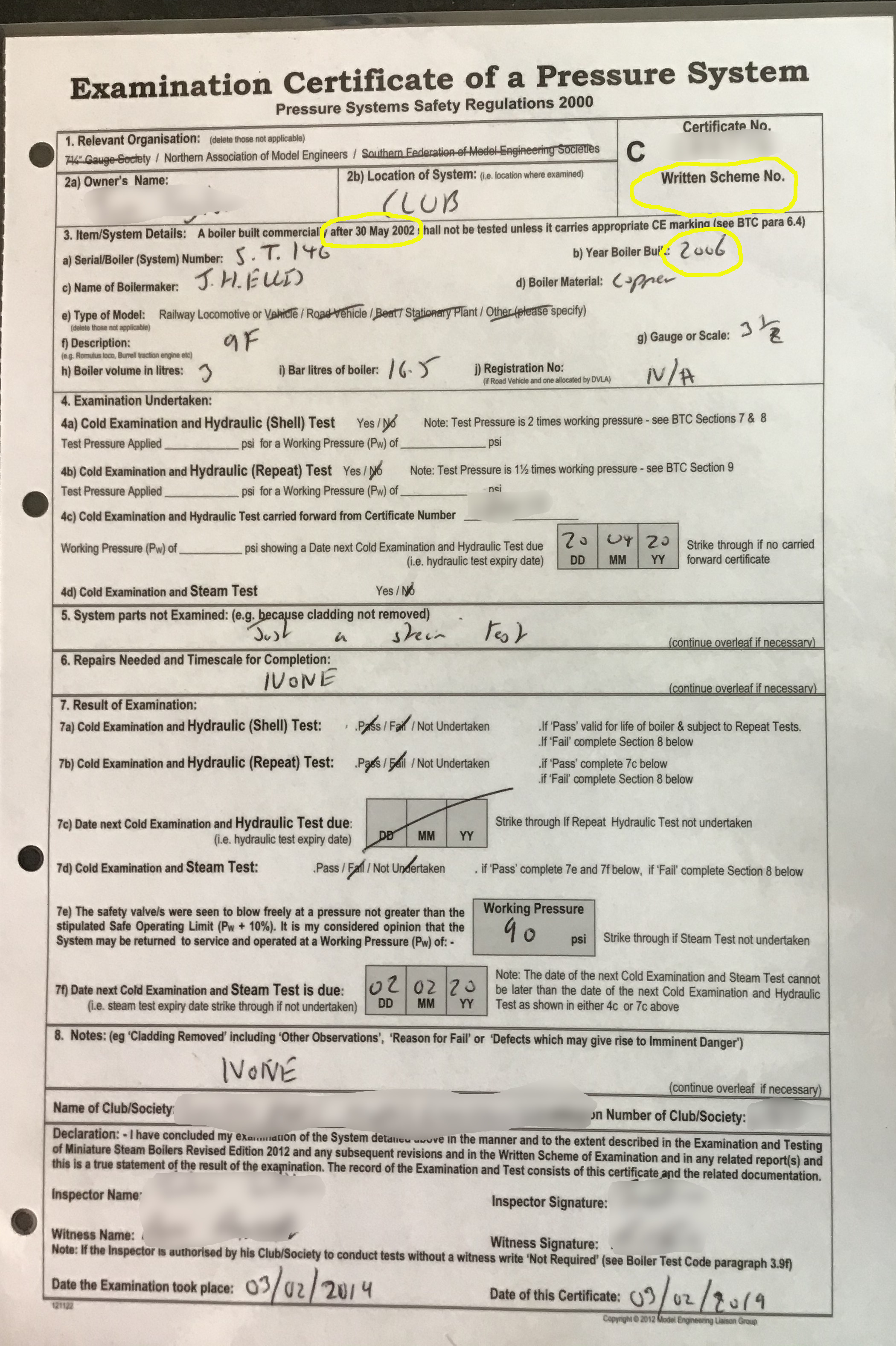 Now - leaving aside the fact that when we tested it here the regulator didn't work; the safety valves accumulated horribly and the pressure gauge was red-lined at 80psi when the steam test was for 90psi working pressure - the main problem was that the certification all recorded the boiler as built in 2006. And it most certainly doesn't carry a CE mark.
So, if you'd bought this in good faith with new boiler certification, you may well have found yourself with a two year wait and £2000 bill for a new boiler before you next enjoyed an outing with your new engine.
Names have been redacted in the certificates shown above - as a club inspector myself it's not my intention to pillory people who volunteer to do this work and, for the most part, do it well. However, we get a great deal of flexibility afforded to us with the club testing regime - if we want to keep that, then we can't be complacent about our standards of testing and record keeping. It is important for everybody to be clear about exactly what is required and what can and can't be tested.
Fortunately for the previous owner of this engine we've had a few Ellis boilers through our hands over the years (and John himself keeps excellent records of every boiler he's ever made), so had an idea from the boiler number roughly when it was likely to have been made - further investigation showed it was actually built in 2000, not 2006. Having established this, we were able to re-test and issue new hydraulic and steam certificates - the club paperwork that came in with it now filed away in our "black museum".
Moral to the story is: always check the boiler paperwork of any engine you're buying carefully - and don't assume that the inspector who signed it knows what he's doing! If the boiler is declared as built after May 2002, then check either that it bears a CE mark, or has a CE conformance certificate from the manufacturer (preferably both, although sometimes it can be difficult to see the mark on the boiler, particularly if the backhead has been clad).