SRS Blog > A weekend in Wales

Topics: Railway visits.
Sam finished his A-levels in June, so in celebration he and I went off to North Wales for the weekend, setting off Friday afternoon and arriving at the Oakley Arms in time for a pie and a pint at 9 that night. I have a bit of a soft spot for the place - as well as being well-placed for exploring the railways around that area (and but two miles from Tan-y-Bwlch station, my favourite place in the world) it's where Mrs P and I stayed for her 21st birthday during a motorcycling holiday there a while ago. 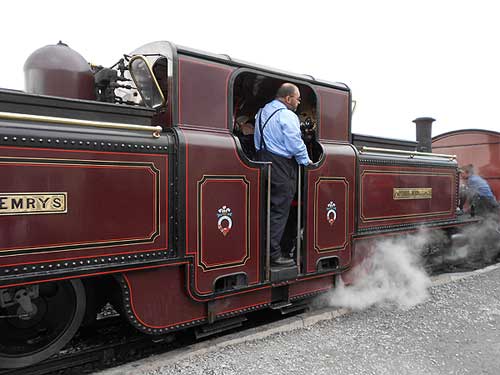 We were up bright and early Saturday morning and into Harbour Station car park at the Ffestiniog Railway by 8.45. Bought our tickets for the day - 10.15 to Blaenau Ffestiniog for the morning, followed by the 2.15 to Rhyd Dhu on the Welsh Highland in the afternoon - before walking down to the far end of town for a happy hour's book-buying in the "other" Welsh Highland's excellent book shop.

The trip up the FR was super, weather was clear sunshine - interesting to see the works at Harbour Station to accommodate the long Garrett-hauled trains of the Welsh Highland, which are currently rather laboriously "top & tailed" into the station with a pilot diesel.

A run up to Rhyd Dhu in the afternoon was super, it's a magnificent railway - through the kindness of one of our customers who we unexpectedly ran into driving the locomotive, Sam blagged a ride up on the footplate, emerging 50 minutes later hot, a bit grubby and highly excited - I heard about nothing else for the rest of the weekend. Emerging from the tunnel into the Aberglaslyn Pass aboard 65 tons of hard-working Garrett is something I will envy him for forever!

Sunday we journeyed to Llanfair Caereinion where to my delight "The Earl" was in steam - it's not a railway I get to very often, I think I last saw one of the Beyer-Peacocks running when I was still in short trousers. We had a coffee and stayed for half an hour to see the first train out down to Welshpool, before driving on to Kidderminster, where we had a couple of wagons to deliver to the Coalyard Miniature Railway which runs alongside the Severn Valley Railway's platform. It was the weekend of the SVR's hugely popular 1940s weekend, with five locomotives in steam and the entire station overrun with soldiers, policemen, spivs and land girls!