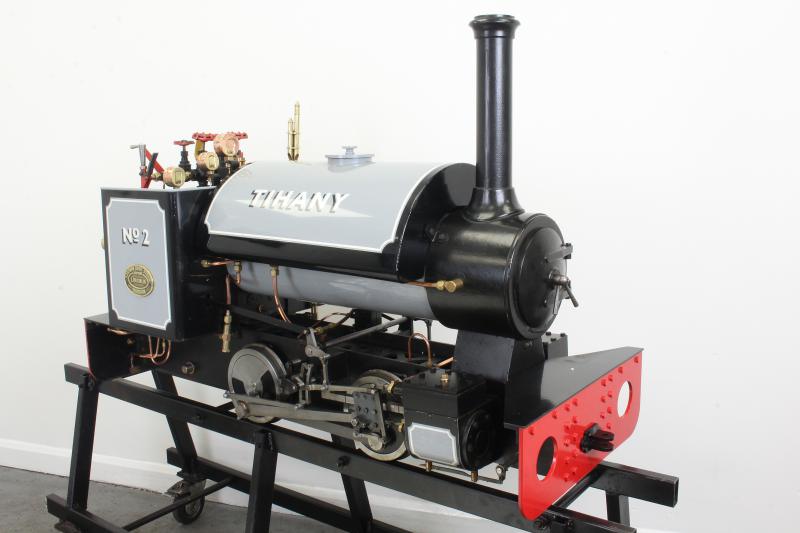 We've sold this one a couple of times over the years. The first owner, on being elevated to the chairmanship of his model engineering society, needed a locomotive befitting his new high office - so he part exchanged "Tihany" for a Big Stafford (that one was "Iyea", you may have seen it running at our 2016 Open Day).

In recent times "Tihany" has been with a local man, in company with a particularly good 3 inch scale Burrell. Ill health has now meant a change to more manageable size 16mm scale models, so the engine is back with us again.

It has been through the workshop for a full service, we've replaced die blocks, little end bushes and motion pins. It had already been fitted with the latest pattern progressive pop safety valves last time it was here.

At some time in recent years - to my embarrassment we didn't keep a record of when, but I think late 2014 - the boiler was retubed. Not because it needed it, but the engine had come back in at the time we'd just bought our hydraulic tube puller. Needing to find out how it worked (and having spare Stafford boilers in stock if it all went horribly wrong) we retubed "Tihany" to try it out. Dead easy - started late one morning, the engine was back in steam the following day!

Supplied with 12 months warranty, new boiler certificate and starter kit of firing irons, oil, water treatment and coal - exactly the same as with a new engine.