Sold August 2008 Back to Archive 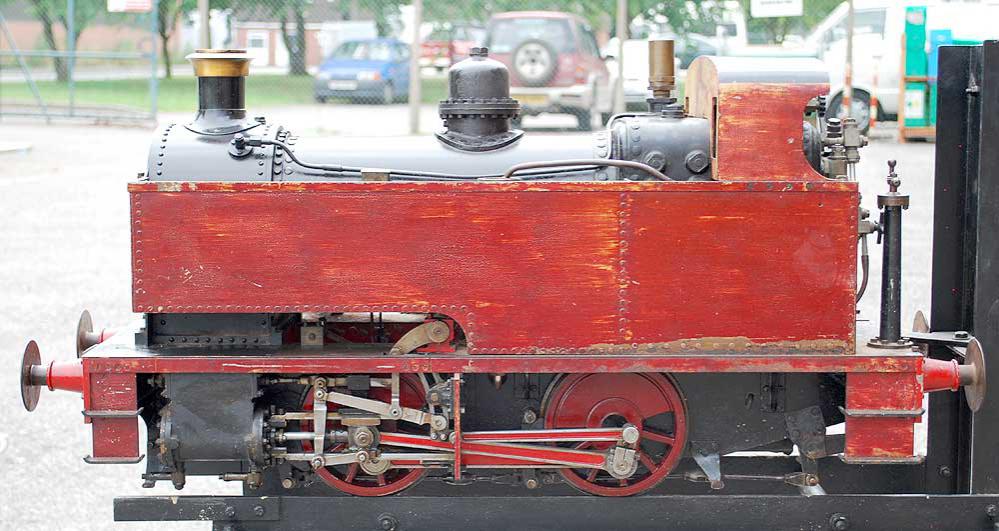 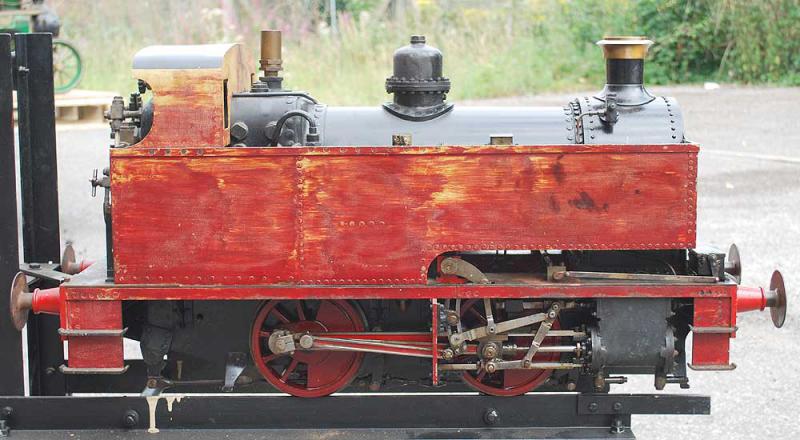 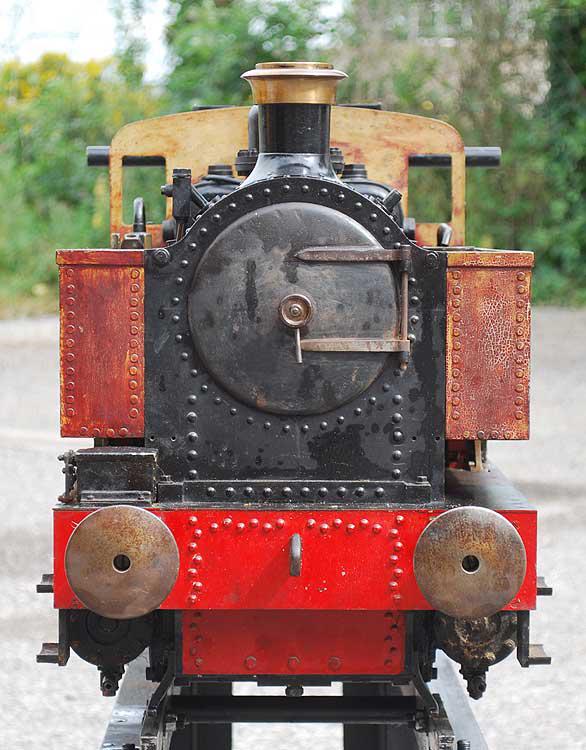 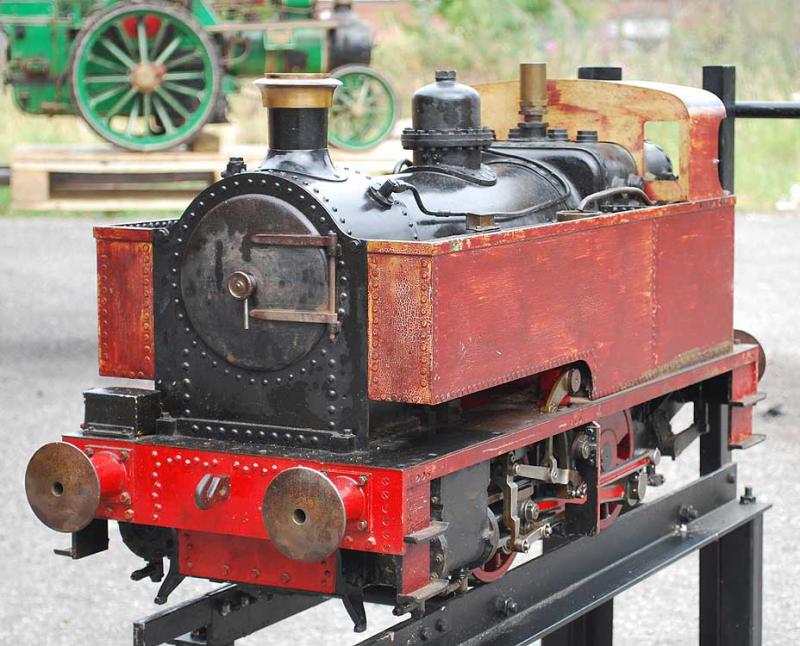 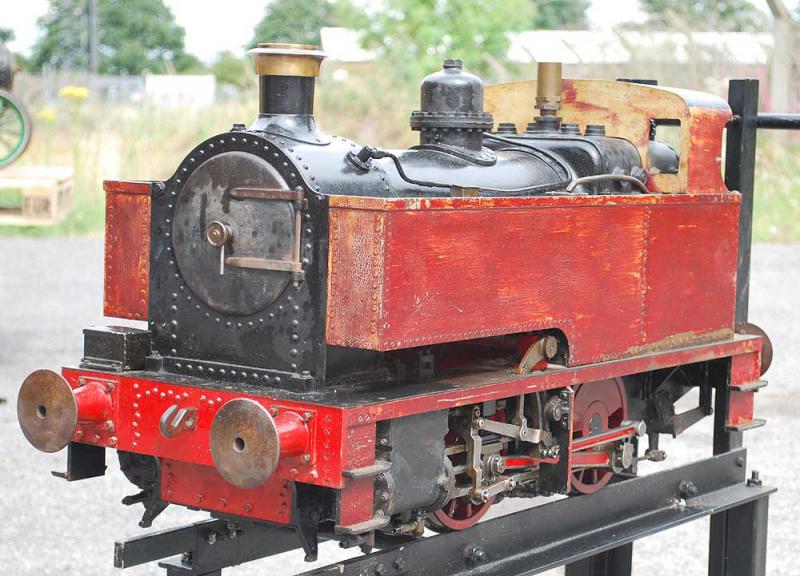 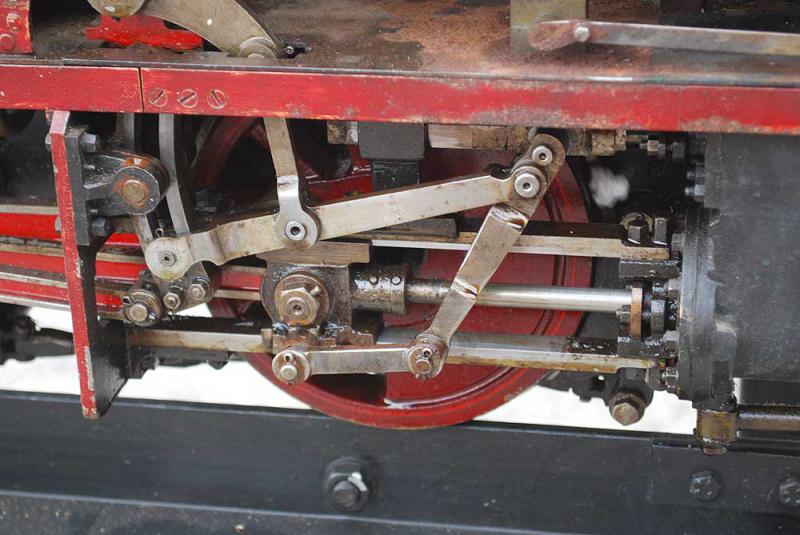 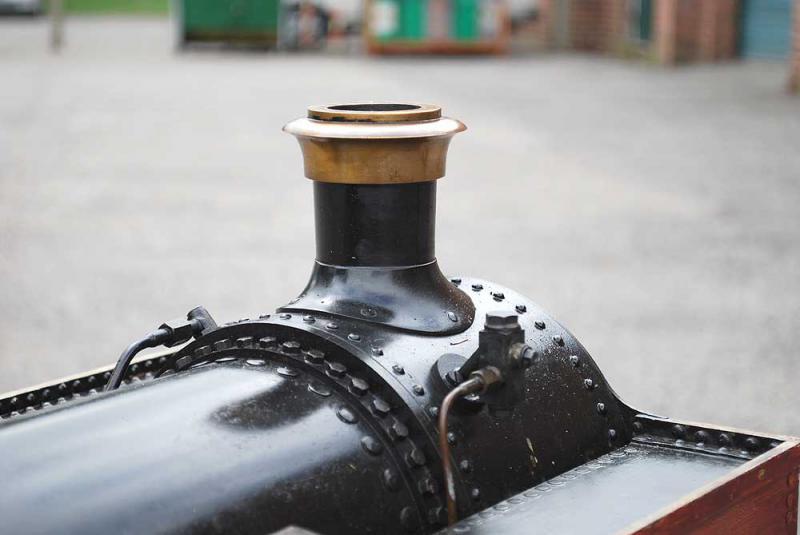 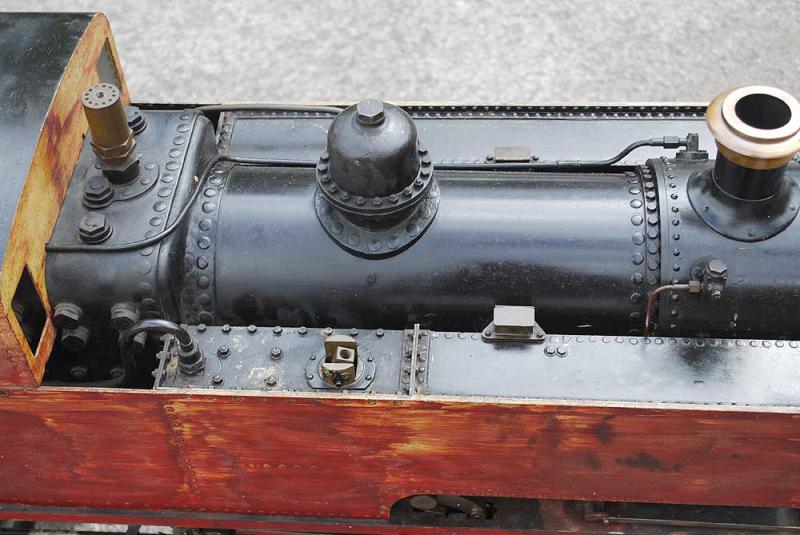 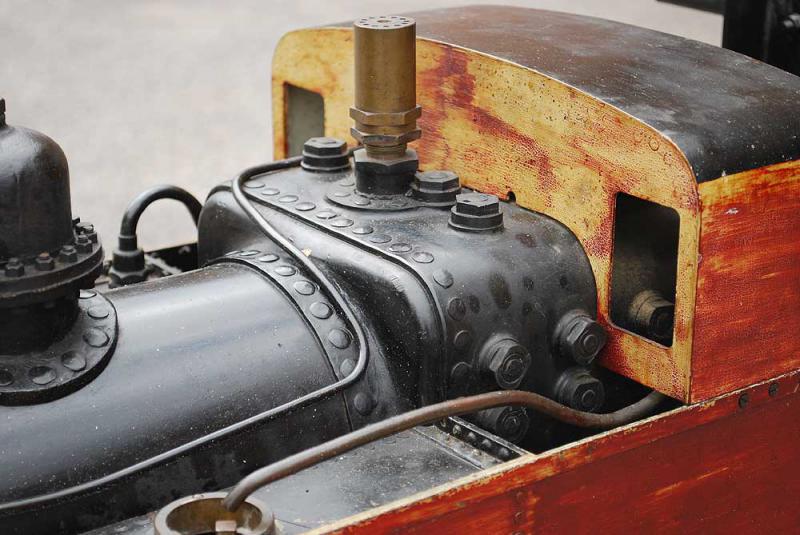 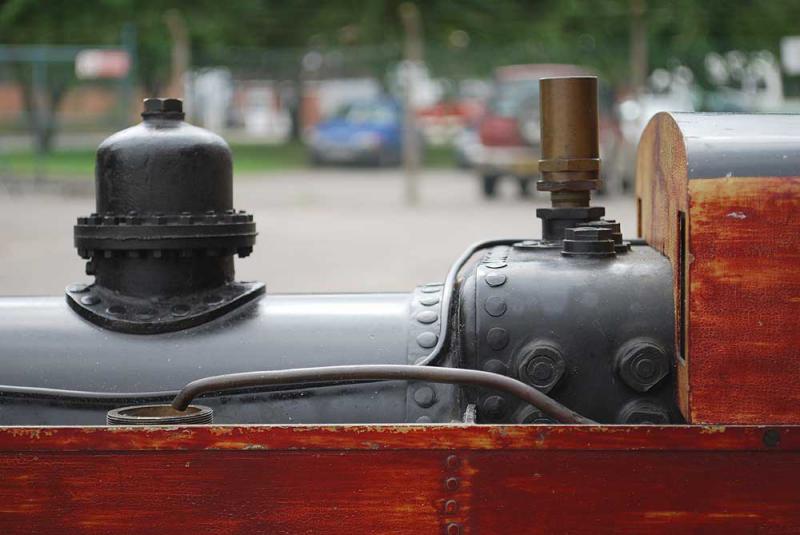 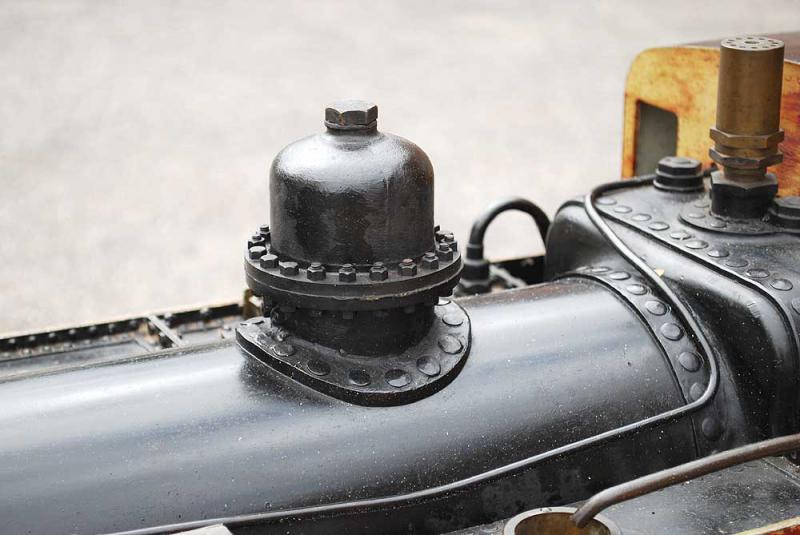 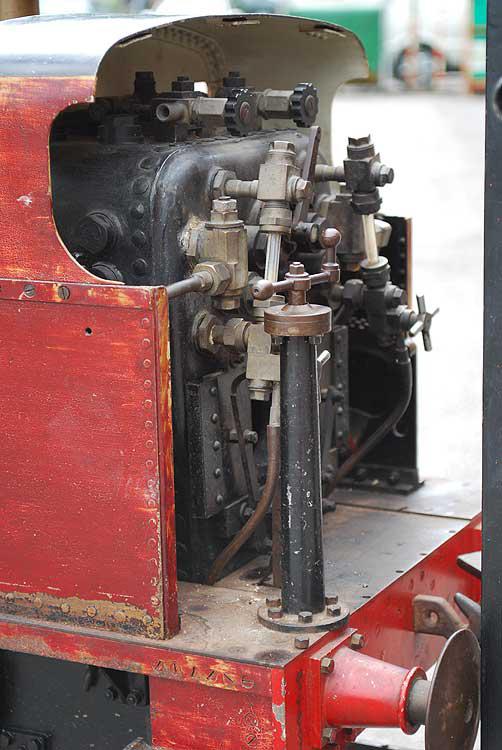 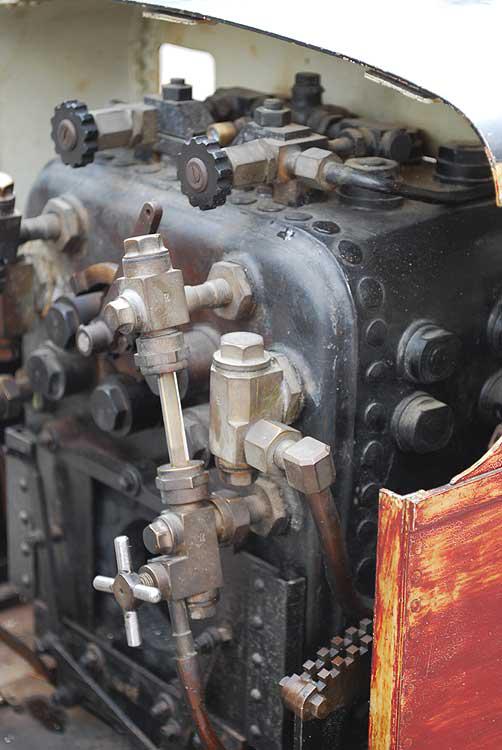 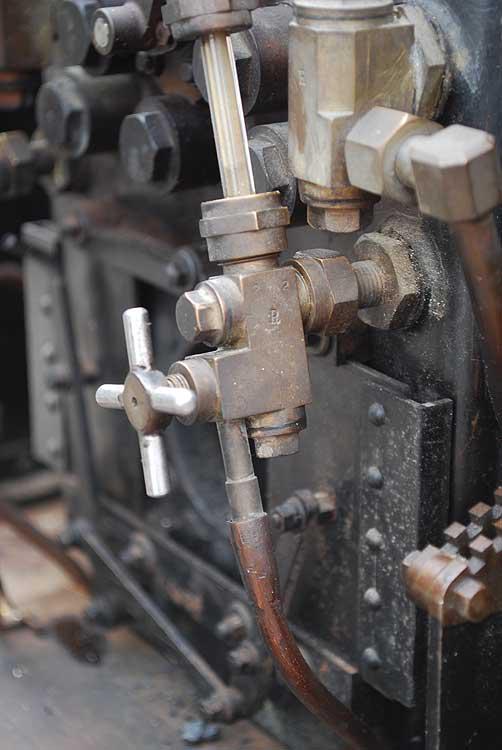 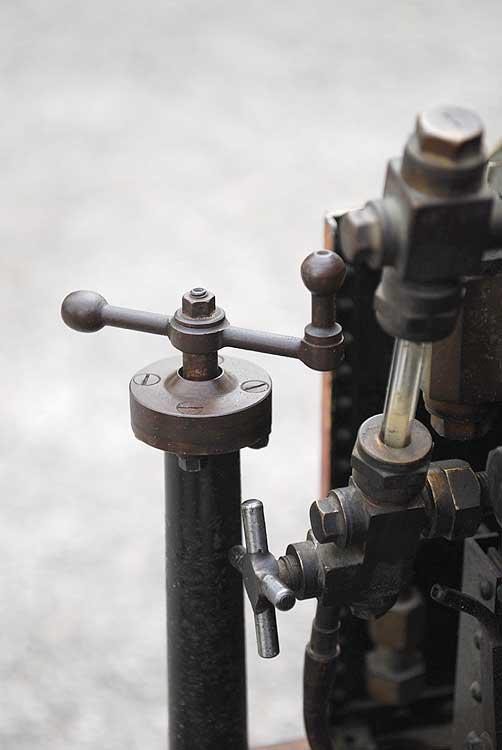 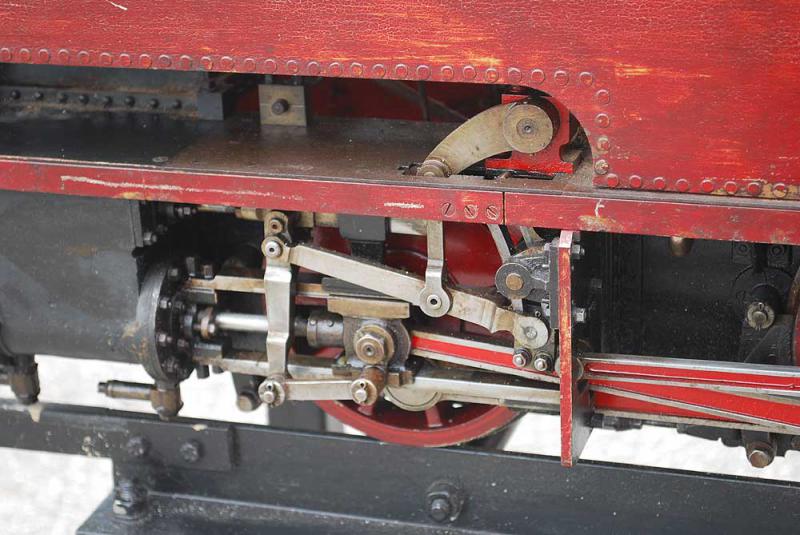 This is a 7 1/4 inch gauge tank locomotive built to George Gentry's "Midge" design, originally published in the 1930s for a compact, powerful engine suitable for garden railways - it was rated as capable of pulling 12 passengers and, with a 9 3/4 inch wheelbase, would negotiate tight curves.

This engine is somewhat of an enigma, I would very much like to know more of its history. It currently looks very sorry for itself, it came in dry and dusty, the brakes seized on, tanks full of cobwebs and obviously not having been run in many years. Whilst cleaning it up underneath and freeing off the brakes it became obvious that not only had the thing been beautifully built in the first place, it appears to have had very little running.

Fit and finish of the motion work is excellent, there is no detectable wear anywhere throughout the valve gear. The bronze axleboxes are of split pattern. The grate has a sliding ashpan shutter, with a very neat clip fitting which engages over the brake shaft when closed. The smokebox has a similar shutter, allowing the contents to be dumped down underneath, rather than having to shovel it out from the front, which seems an excellent idea.

The boiler is a fully flanged and rivetted copper job, superbly executed - the double reverse curves on the throatplate are a work of art in themelves. It appears as-new inside, the grate looks to have had a handful of steamings.

After freeing off the brakes, cleaning the gauge glasses, testing the boiler and oiling all round, I steamed the engine in the workshop yesterday. Bringing a well-built engine back into service after a long layup is one of my all-time favourite jobs, as the pressure starts to build the burning dust smell gives way to hot oil and the whole thing seems to come back to life. Somewhat to my amazement, after two or three turns of the wheels to clear condensate from the cylinders, it instantly settled down to a steady tickover with near inaudible, dead square exhaust beats. Even the pump picked up straight away and, for the next hour, easily kept the boiler topped up.

I think that the engine probably dates from around the time of the original design, certainly pre-war. The paintwork, which is now very thin and faded, was originally a well-lined red coach paint - it still shows a true colour with some lining on the wheels. The boiler appears never to have been clad nor an outer dome fitted.

It was a toss-up with this one whether to list here as a restoration project or, despite its look, on the "Locomotives" page (which is probably where it really belongs). There are one or two minor jobs to do - the presure gauge didn't work due to a blocked syphon (although Geoff is on the case in the workshop, by the time you read this it will probably be sorted - Wednesday evening, fixed), the mechanical lubricator linkage slips and requires either repinning or silver soldering. Other than that it is a finely made engine, particularly free steaming, which runs very well indeed.

There's a video of our escapades with it yesterday here.

Saturday update: I was intrigued to know how it would go on a real railway, so after a morning's gentle fettling and a boiler test, it was fit for running down the club. Sam and I took it over yesterday and had a most enjoyable afternoon - it goes particularly well. There's a clip of us running, we even persuaded Martin to give up welding pointwork for half an hour and come and have a play (and no, his enthusiatic comments on the video were neither rehearsed nor remunerated!).