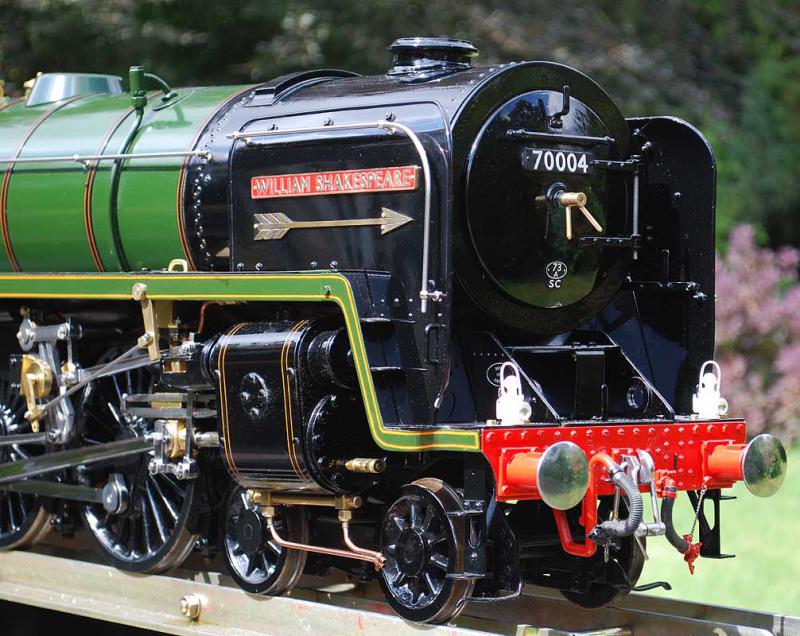 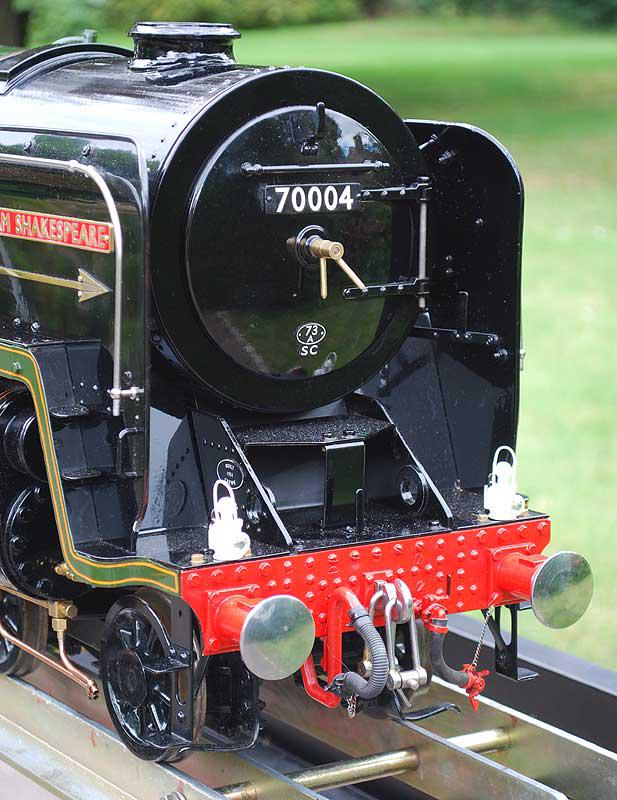 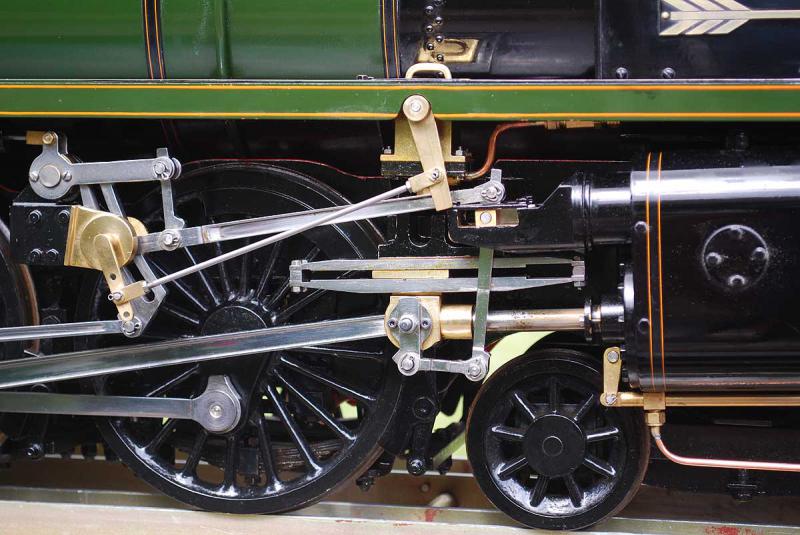 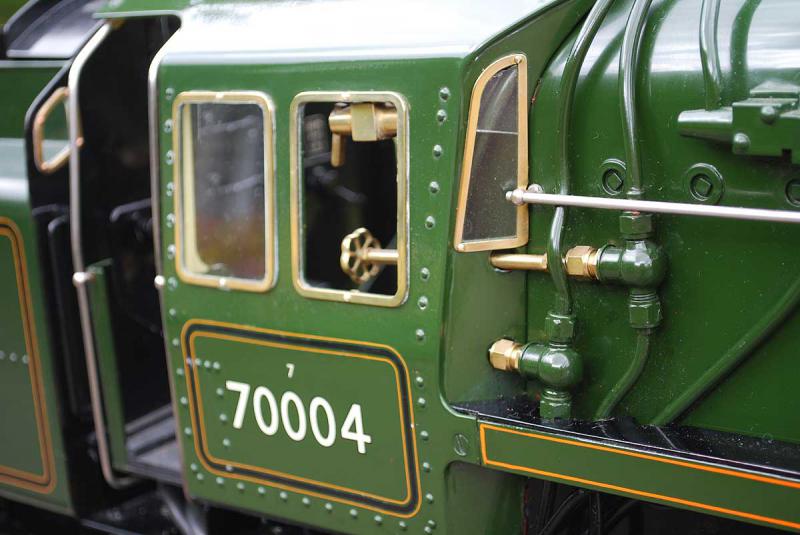 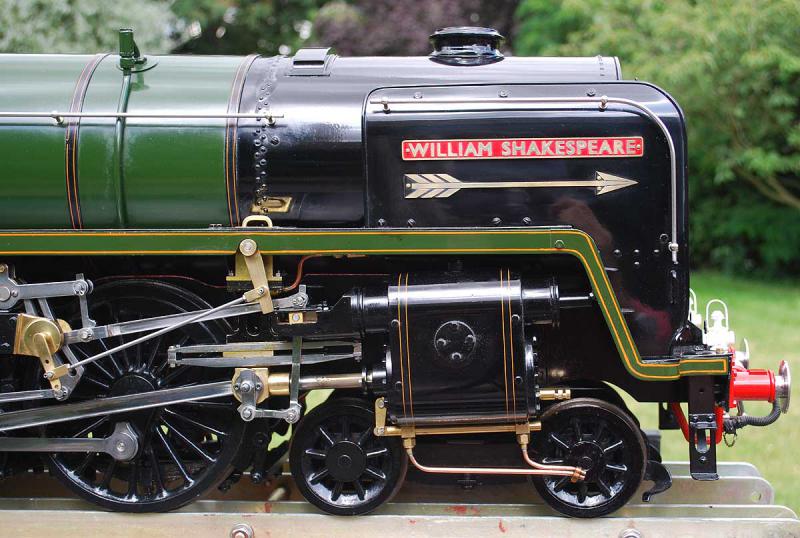 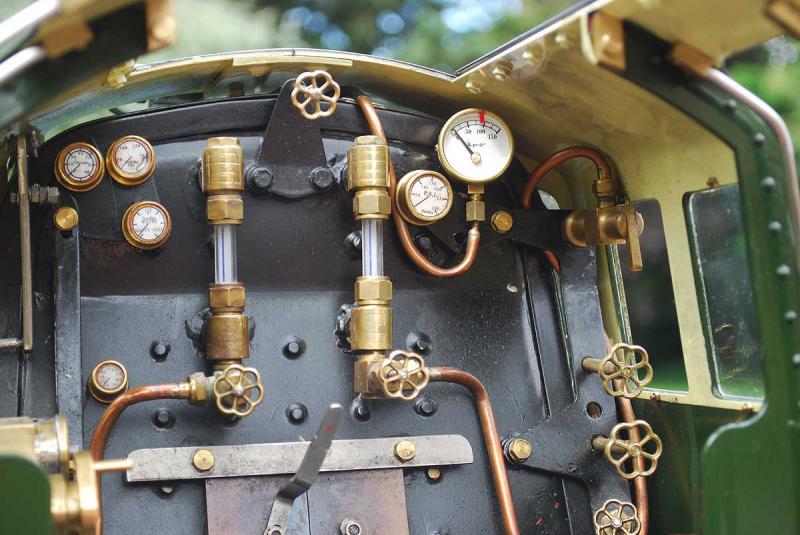 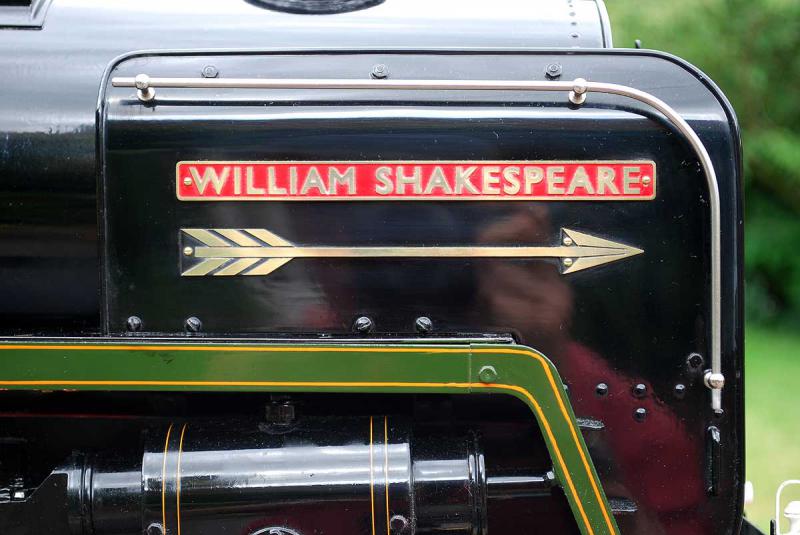 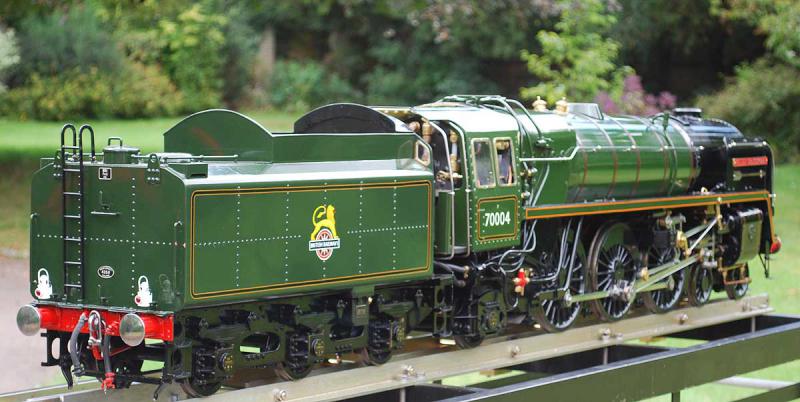 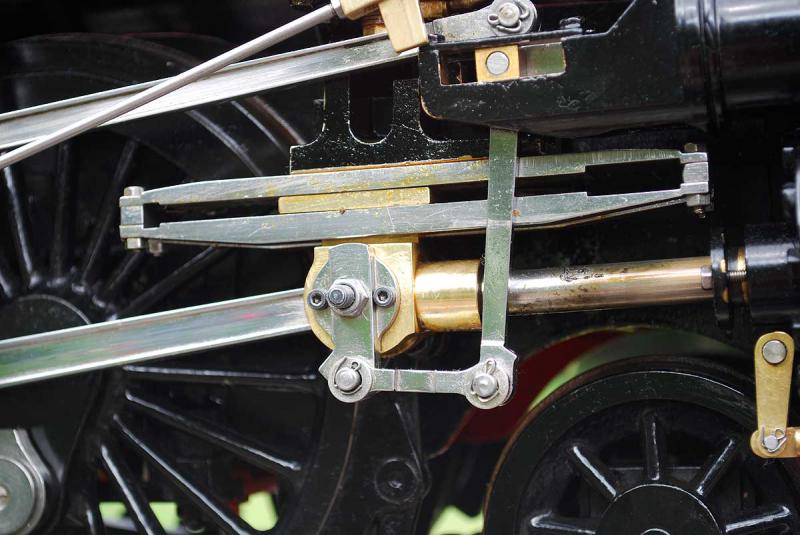 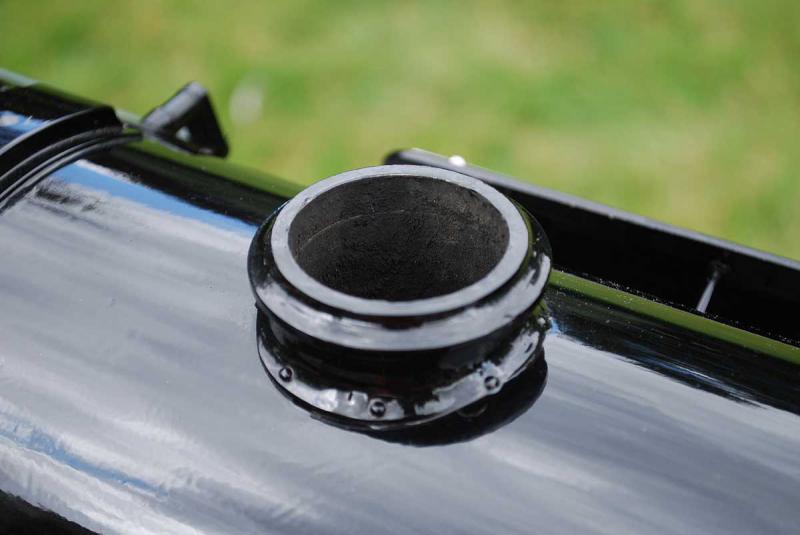 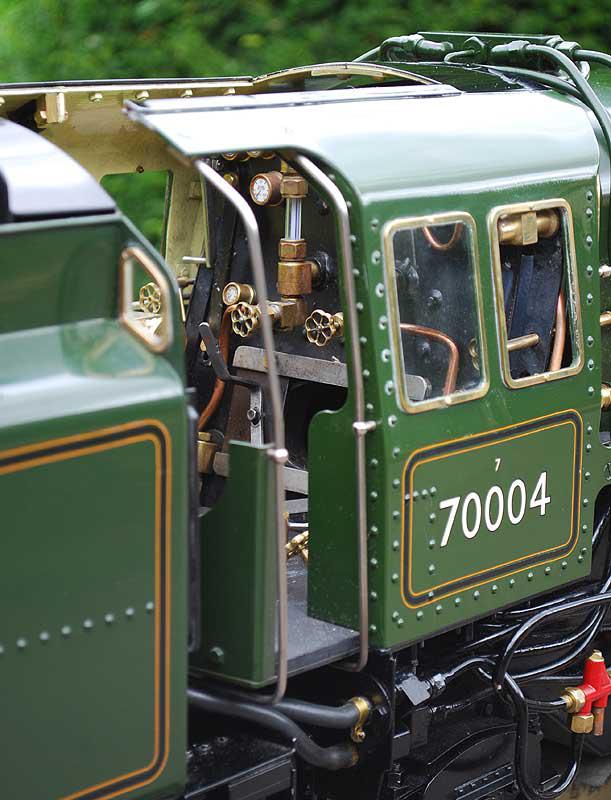 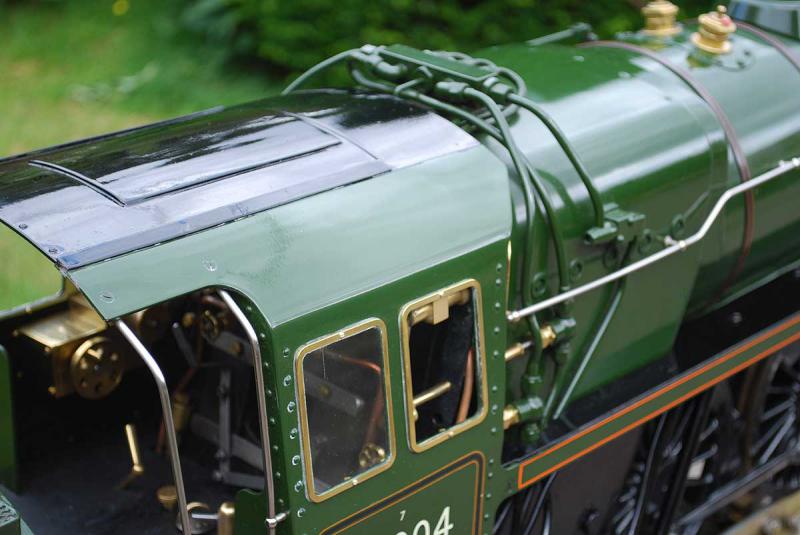 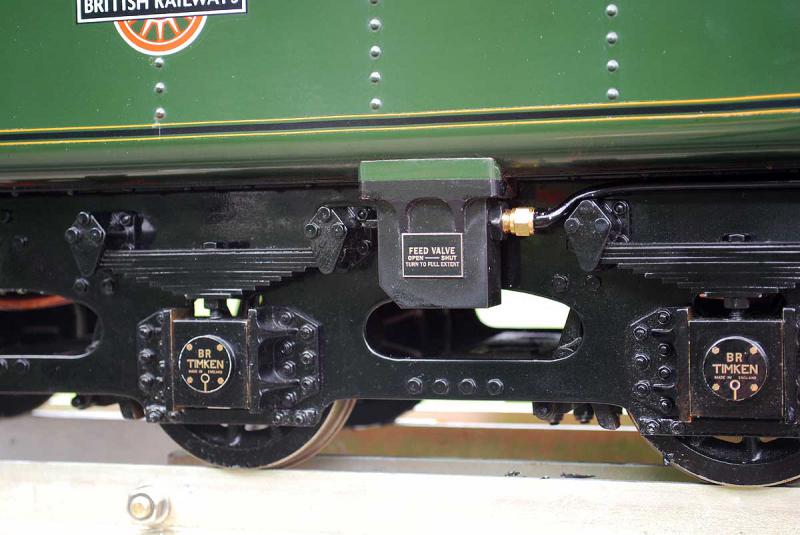 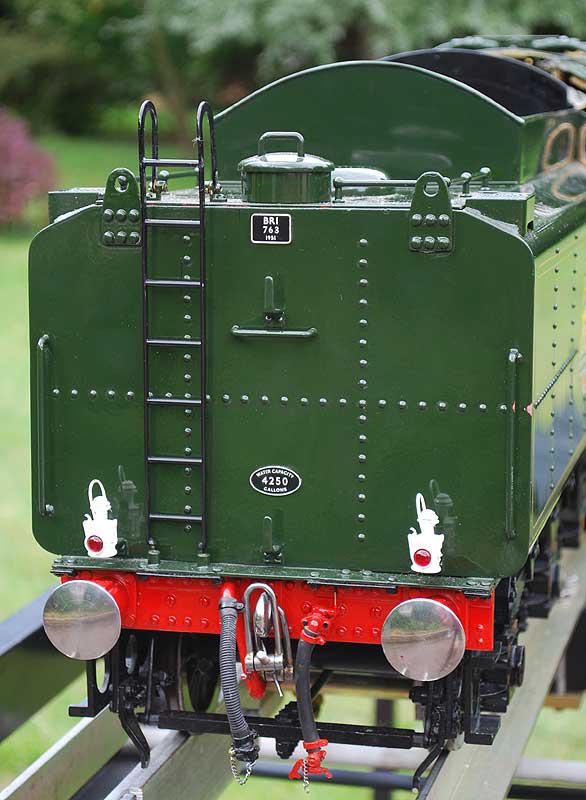 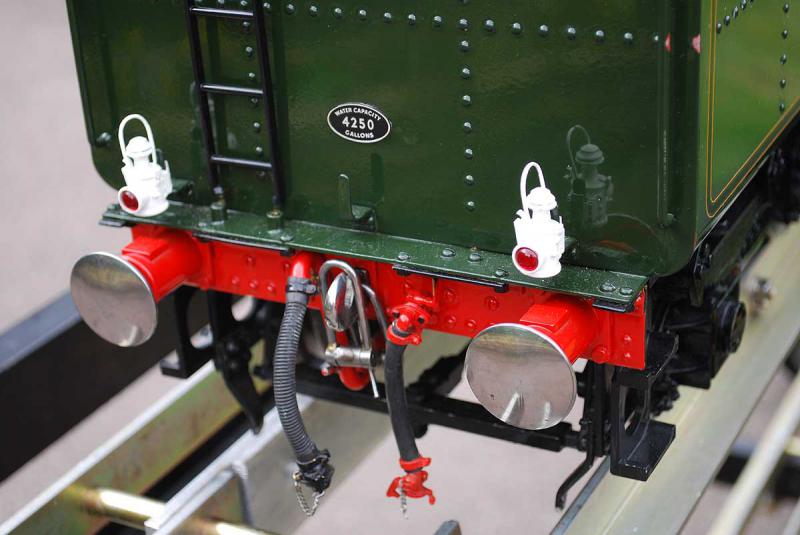 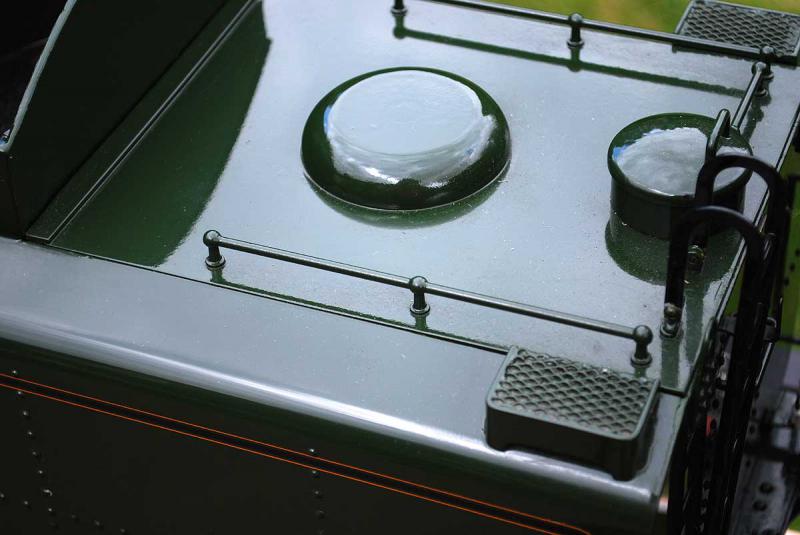 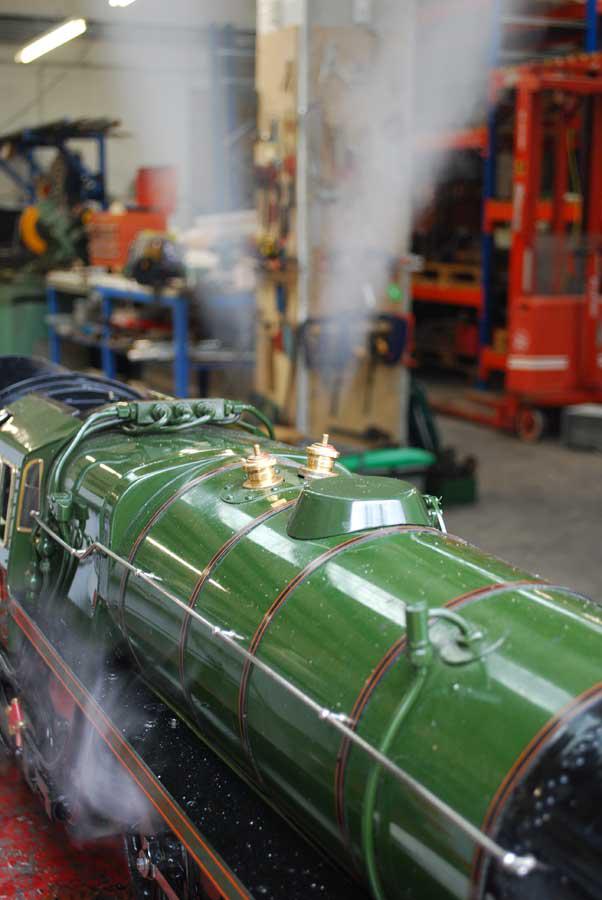 Built from a kit by an experienced engineer of Inspector Meticulous tendencies, this Britannia was assembled over a two year period, completed in 2004. It was run for the next four years before being retired on grounds of its monstrous size (in fairness the builder, long-retired, was even starting to find his Class 27 and Polly III a bit of a handful). Last run in 2008, it was taking half a day to get ready to go out and a day afterward to clean it up again to the condition you see here.
Silver-soldered boiler with superheaters, 90psi working pressure, feed by twin injectors, axle and hand pumps. Cast iron cylinders with piston valves actuated by Walschaerts gear with screw reverser in cab. Mechanical lubricator.

In addition to the stunning paintwork (check out his Polly III here to see another fine paint job), much detail has been added, from the works and shed plates, Golden Arrow emblem and lamps, through to added rivetwork, vacuum hoses and the array of dummy gauges in the cab.

We took this along to Bristol Model Engineer Exhibition at the weekend (much recommended by the way, our first time at this show) where it attracted a great deal of attention on the stand. Mrs P and I did this show together, so I'd promised to exercise a little restraint in my choice of engines to take (Harrogate Show still being a recent memory when we turned up with twenty engines, including a 7 1/4 inch gauge 9F and 10 1/4 inch gauge Black 5 - still can't imagine what we were thinking about) the Britannia arrived a few days beforehand and caused a raised eyebrow from herself as it emerged from the van.

Complete with a fitted wooden transit case for the locomotive.

Our boiler inspector did a hydraulic test on Tuesday, we've now had a chance to run the engine (and Claire kindly cleaned it afterwards, she's a bit of a closet polisher). Steams freely, runs ok backward and forwards, notches up. A variety of minor jobs to do - some from it having stood for three years since its last run (injectors don't pick up although pumps are ok, one lubricator has a leaky non-return valve), others more typical of the design (like the leaky drain cocks), but it kept itself in steam and water for an hour on the rolling road.

There's a short video of it running here - first video we've posted for a while, I bought a snazzy new HD video camera recently, it's taken this long to figure out how to make the thing work.