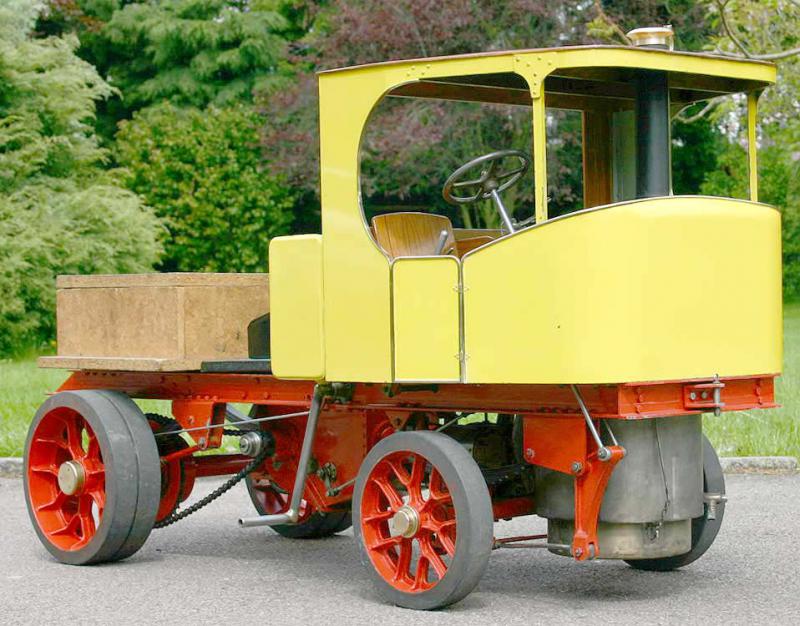 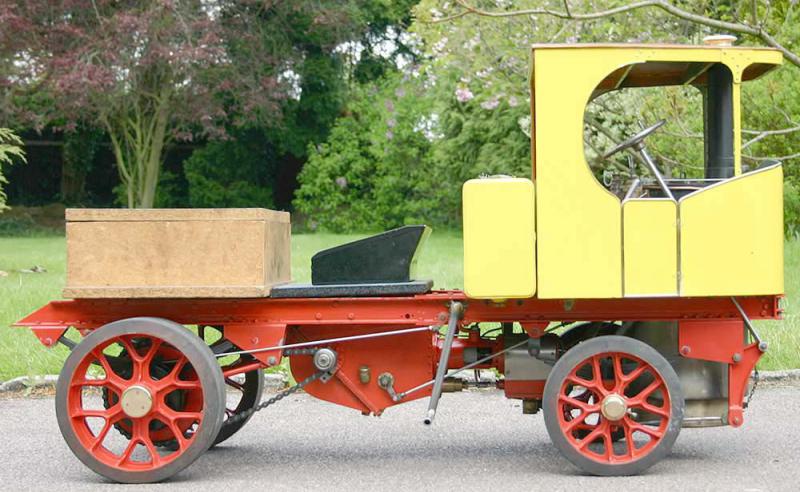 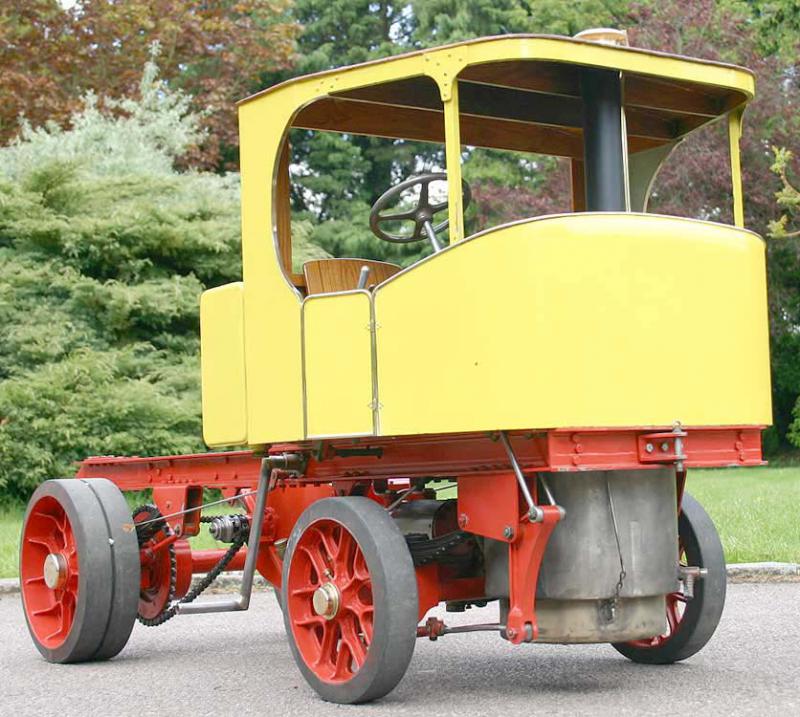 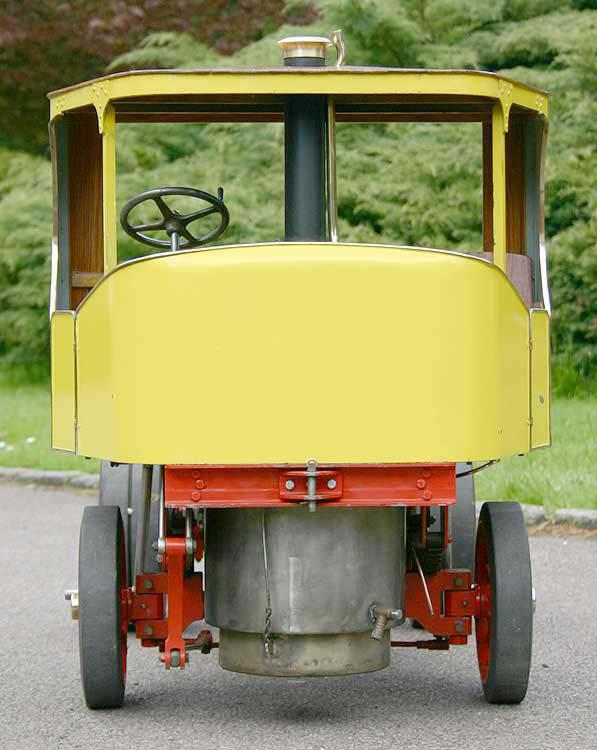 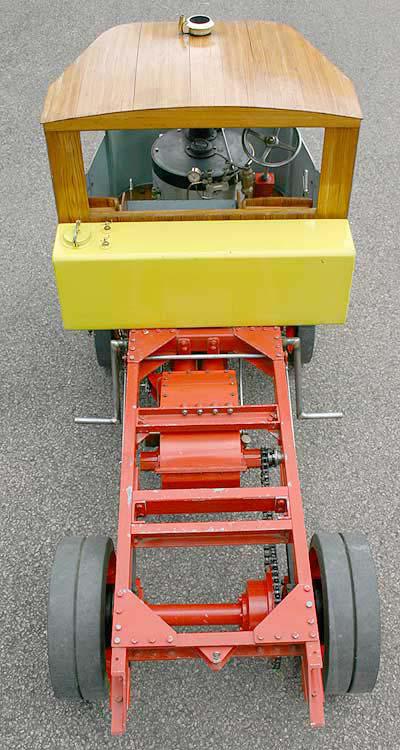 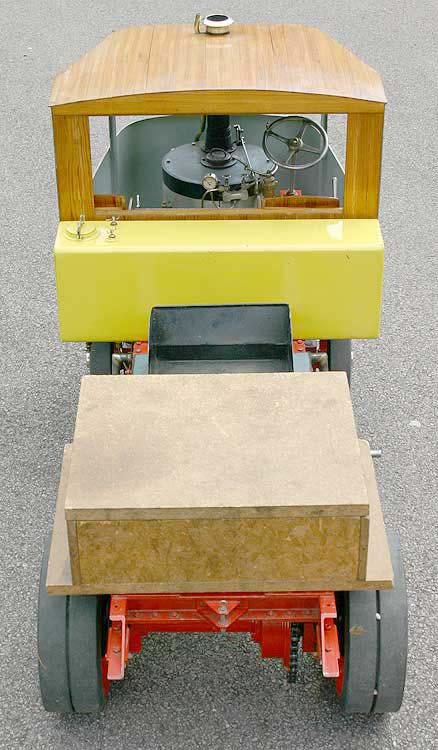 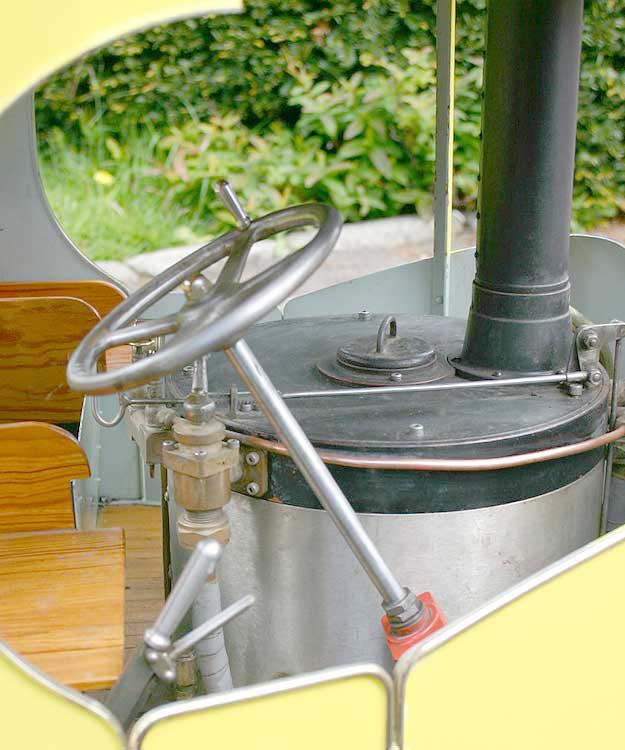 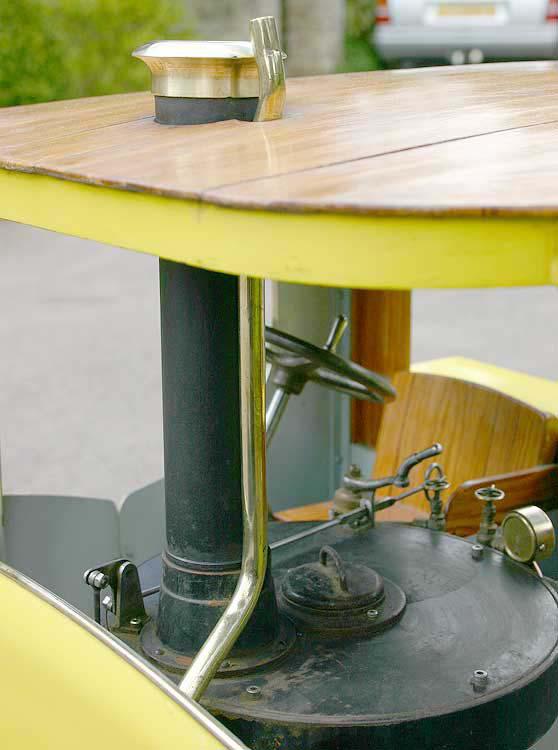 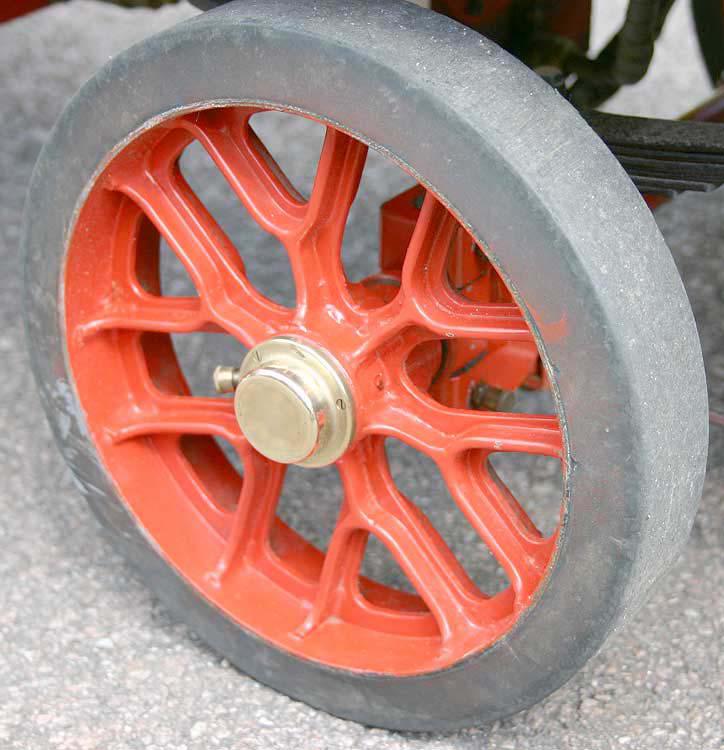 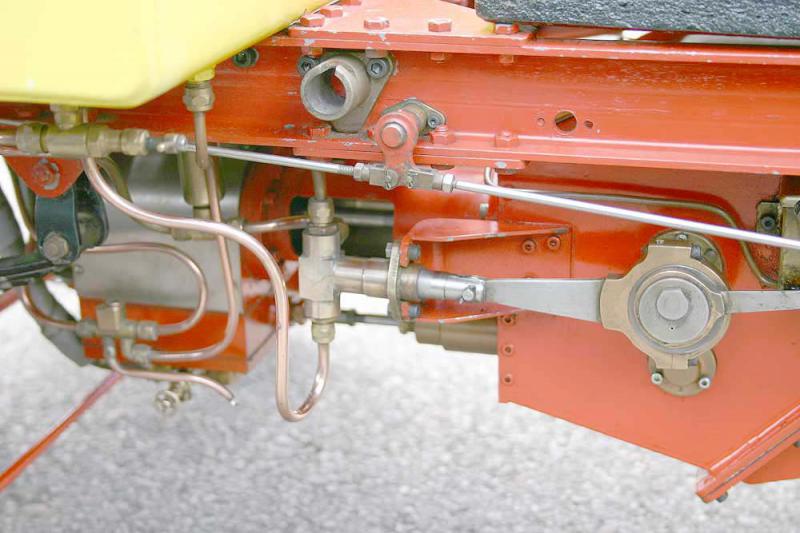 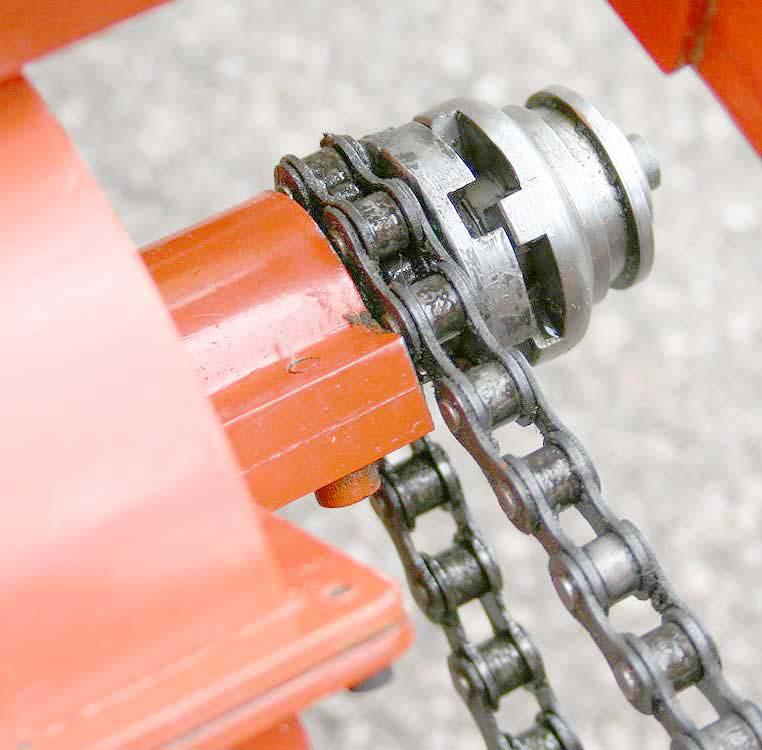 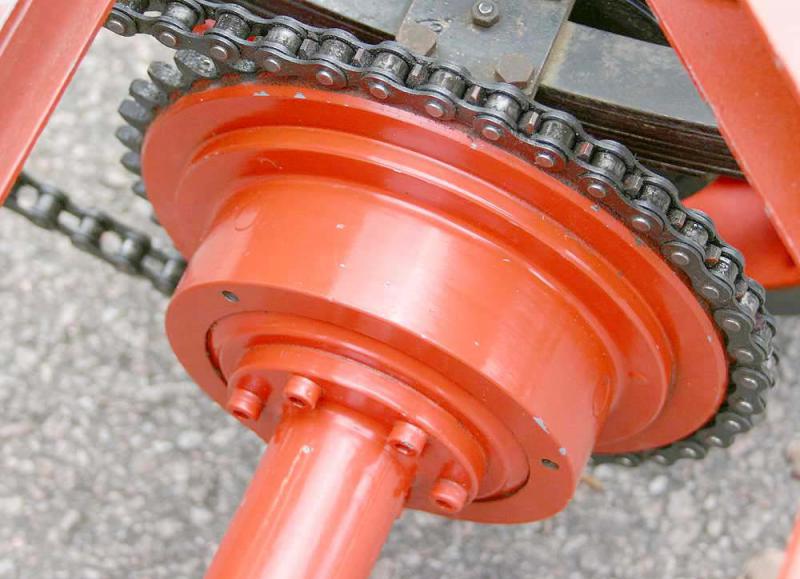 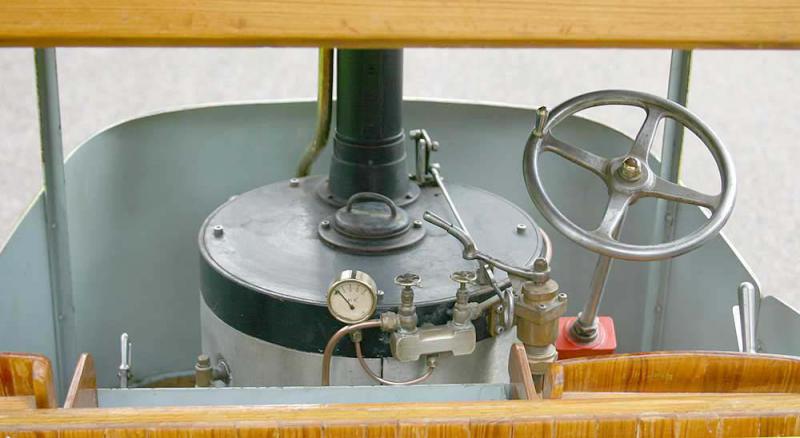 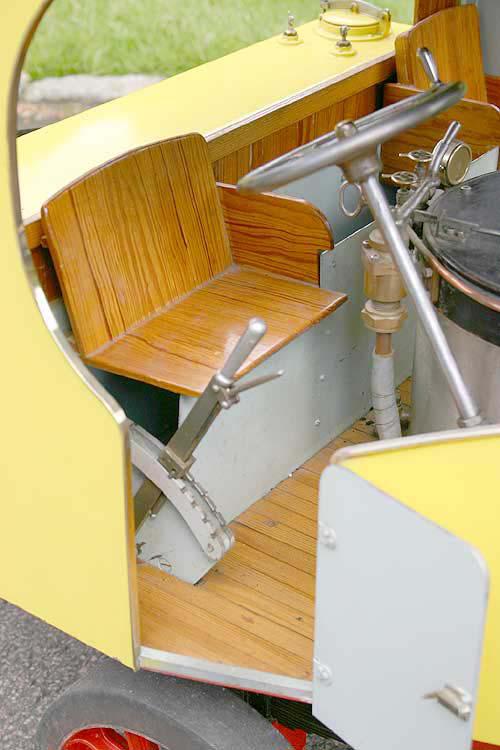 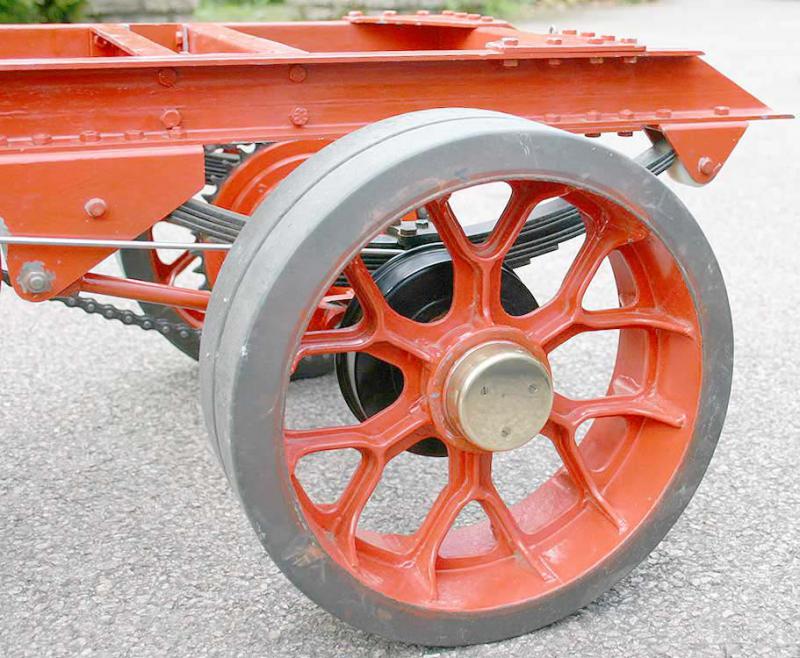 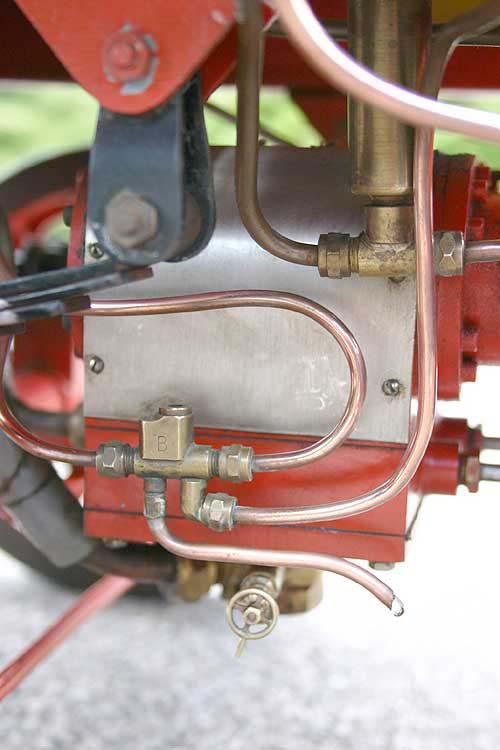 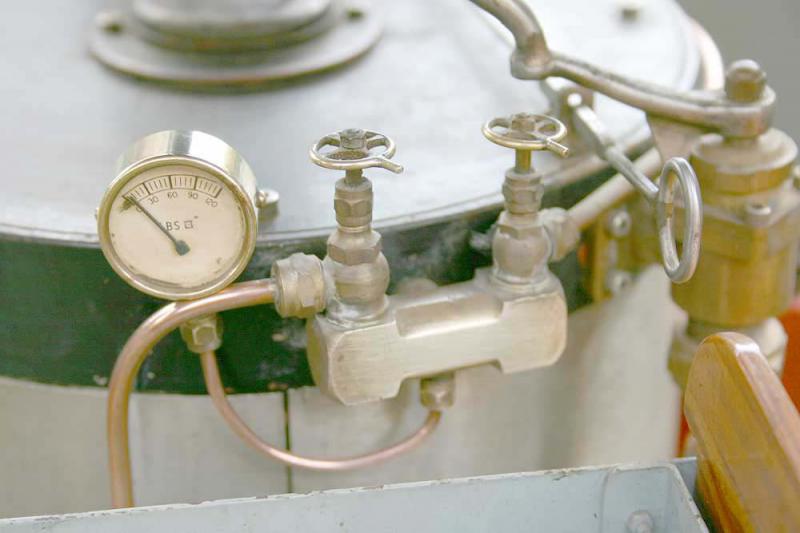 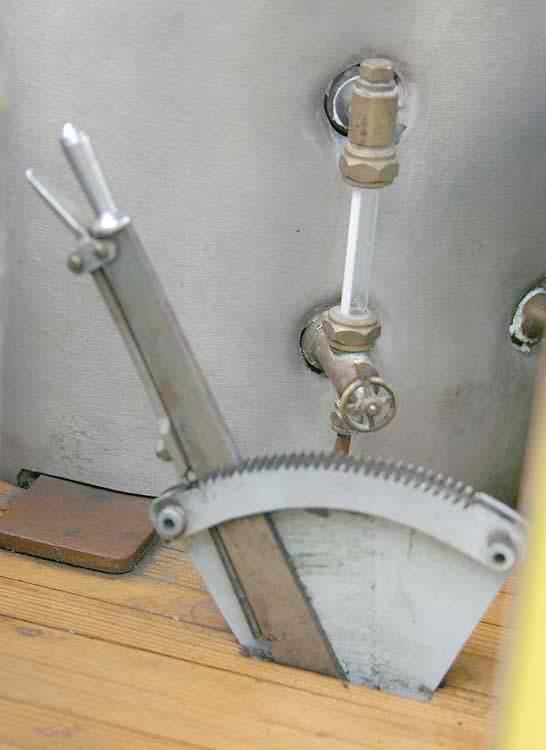 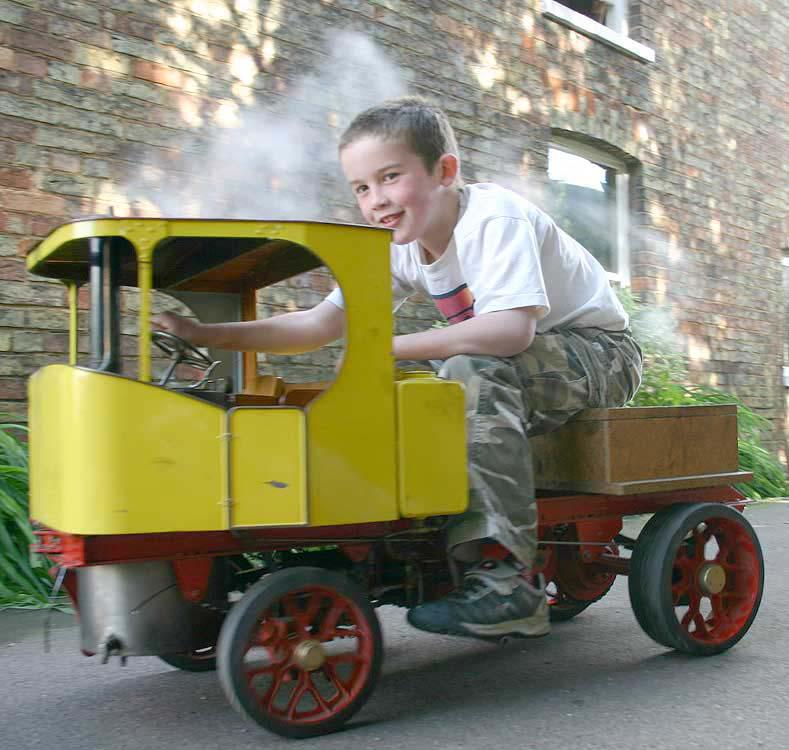 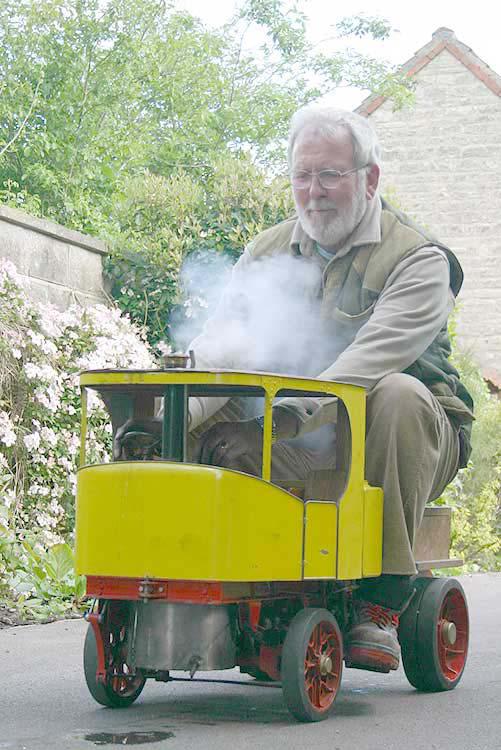 Usually seen in 2 inch scale, Robin Dyer's design for the Clayton steam wagon is very attractive but requires an expert hand on the controls to get the best from it - the engine has big cylinders, a small boiler and tall gearing all of which, combined with the permanently-engaged road gear, makes for ticklish driving. All sorts of modifications have come out over the years to improve the basic design but, to be honest, I've never managed to travel too far before it's time to stop for some serious attention to the fire/water/pressure (and usually all three).

What a difference building it in 3 inch scale makes. I've never driven a wagon that goes as well as this one, makes steam as freely nor attacks everything from smooth tarmac to bumping over the back lawn with quite as much enthusiasm. Exceptionally well made and containing a host of minor (and some not so minor) modifications, I had this in steam all Saturday afternoon and eventually had to prise the people off it at the end of the day.

Copper silver soldered boiler fed by a super reliable and very effective injector and crankshaft driven pump with bypass. Such was the efficacy of the injector that we didn't touch the pump all day. Stainless steel cladding and ashpan, the cast-iron grate removes easily in three sections for cleaning. The twin safety valves normally exhaust through a rather handsome copper pipe leading up through the roof - same on this engine, except that the builder has T-ed in a pipe to drain the condensate so that a hot shower doesn't accompany every lifting of the valves. Nice idea.

Twin cylinder engine with Allen valve gear, pole reverser in cab. Mechanical lubricator. The regulator is a very positive quarter turn affair, rather than the normal screw-down type which is fiddly.

The transmission has been modified with an extremely neat dog clutch mounted on the gearbox shaft, allowing the engine to be taken out of gear. This makes pushing it around when it's not in steam possible. When it is in steam the engine will sit and tick over in neutral which maintains the fire and works the boiler feed pump.

The ashpan control in the original design is a rather primitive rod stuck to the inside of the cab. On this engine the builder has mounted a stainless steel ratchet handle on top of the boiler, connected through a bell crank to the ashpan which gives fine, positive control.

The wagon has an effective ratchet hand brake working on the rear axle. There are a set of detachable foot pegs which mount into the chassis behind the water tank and, in combination with the tool box /driving seat give a really comfortable driving position.

The wheels are authentic design and rubber tyred - particularly impressive as they are not aluminium castings, as per the two inch design, but beautifully fabricated in steel.

There is a part-built articulated trailer as per the original drawings - this is a complete chassis, rear axle and springs, it requires wheels. I would be tempted to use the tow hitch instead and pull a passenger trolley behind as with a three inch traction engine.

I really rate this engine - it goes well, is easy to fire and drive, has many well-thought out ideas and is well made throughout. On one of his high-speed passes down the drive, Jack somewhat cryptically whooped "it's better than bicycling" - what more can I say?