Topics: Rebuilds & overhauls, Workshop.
We had a call from a commercial miniature railway earlier in the year, asking us to retube their 10 1/4 inch gauge LMS "Royal Scot" - an engine built to the Basset Lowke design many years ago.
Re-boilered in 2015, they wanted a new set of tubes in advance of the summer season, when the engine is in regular, intensive use. 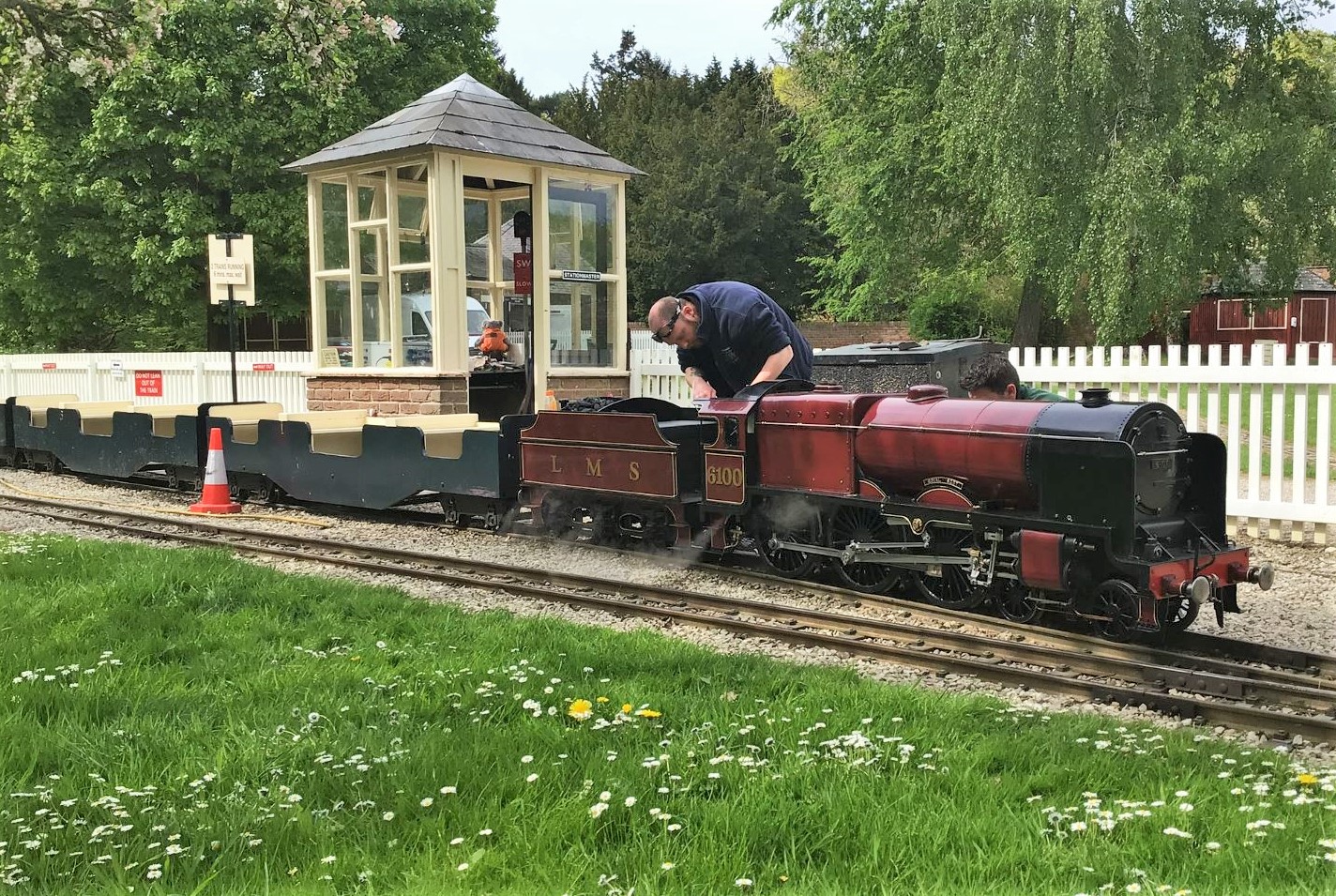 Whilst talking about the retubing, they also asked if we could have a look at the bottom end and service the lubricators - "no problem" we said, will pick it up along with the boiler, which had already been lifted from the frames.
The boiler was built by Israel Newton, a beautifully made thing, all welded with flanged backhead and throatplate. 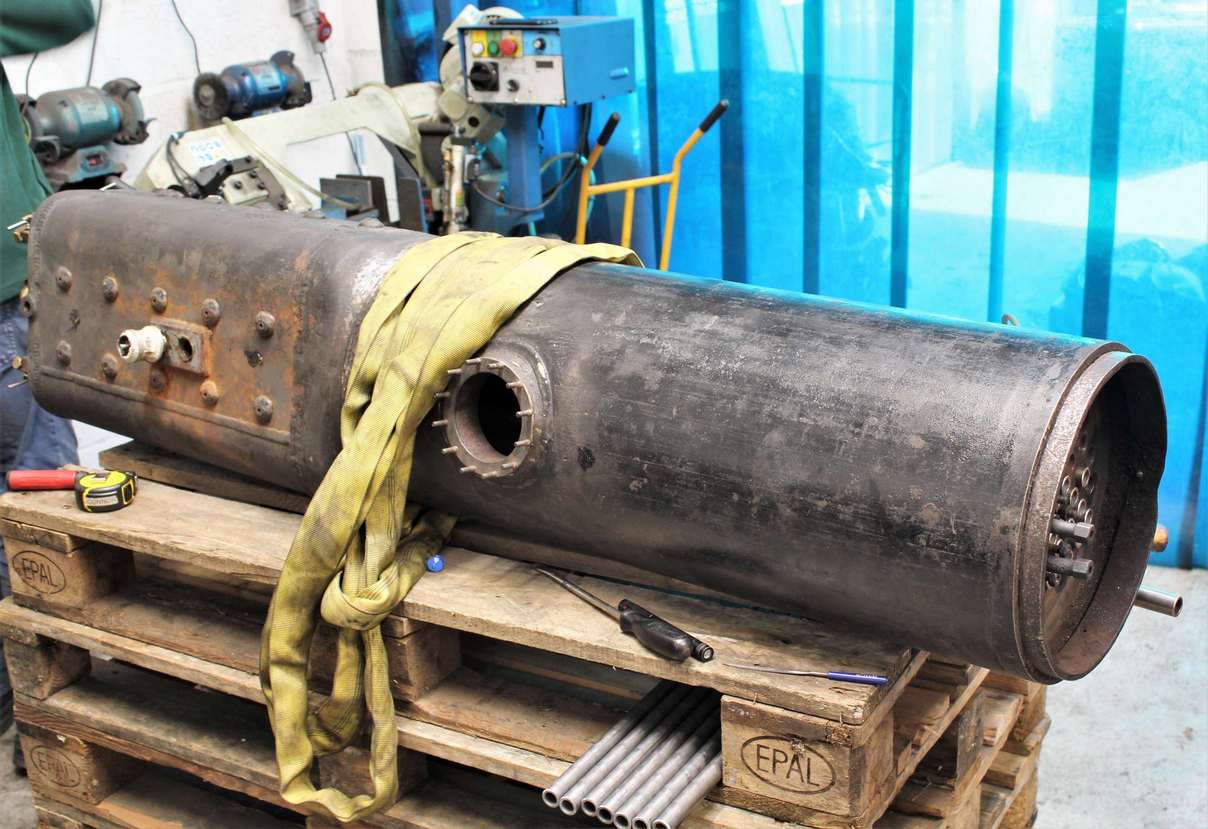 Getting the tubes out was straightforward - they were being replaced as a precautionary measure rather than because they were completely shot, which meant they all pulled clean out (really motheaten tubes often take four or five pulls, coming out in pieces which can be a bit soul-destroying!) 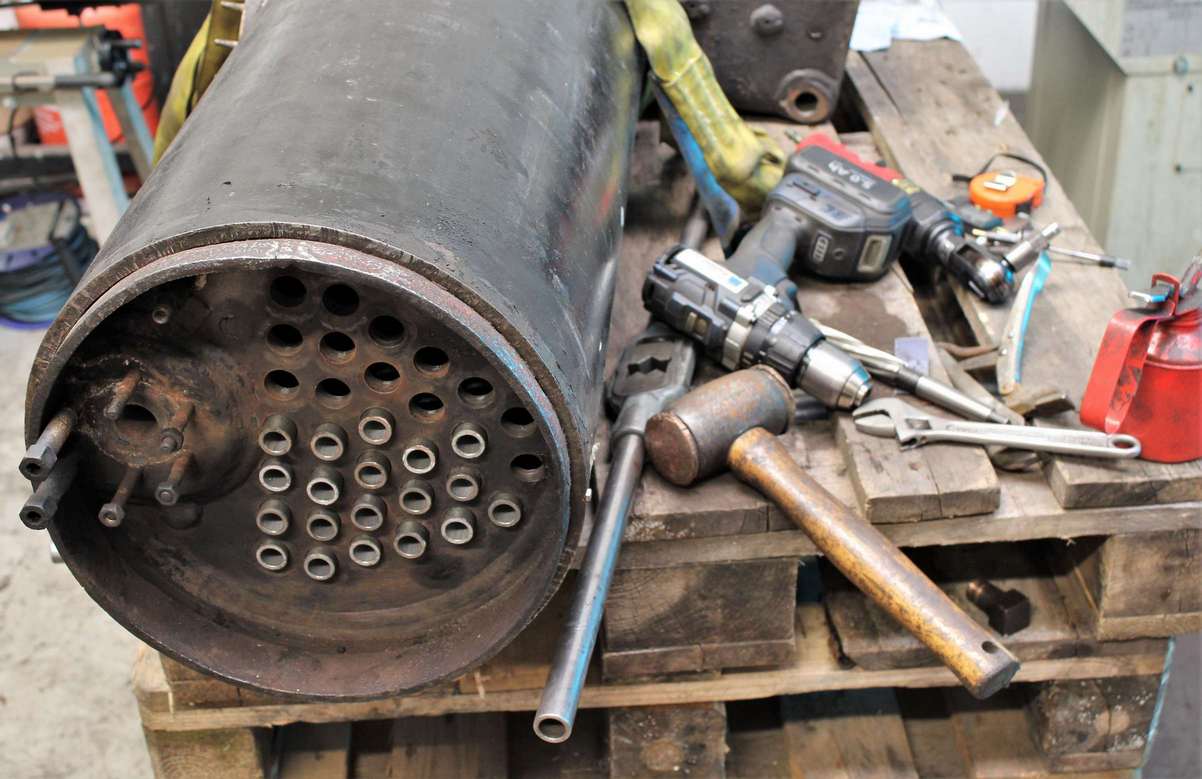 New tubes were cut and fitted before hydraulic testing at twice working pressure. 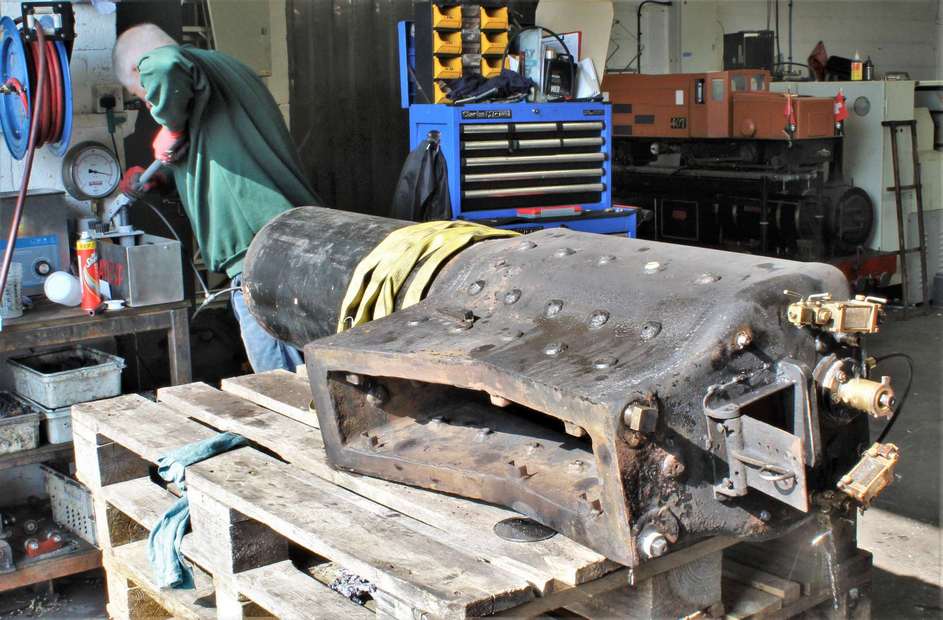 All dry after 30 minutes on test - job's a good 'un, finished four days after the boiler arrived in the workshop. We fondly thought that this would be the last time we'd see this boiler on hydraulic test - oh, if only we knew...
Coming to the chassis, on stripping it we found pretty much every bush in the motionwork and valve gear needed replacing. One crankpin was in poor condition, apparently having picked up in its bearing. 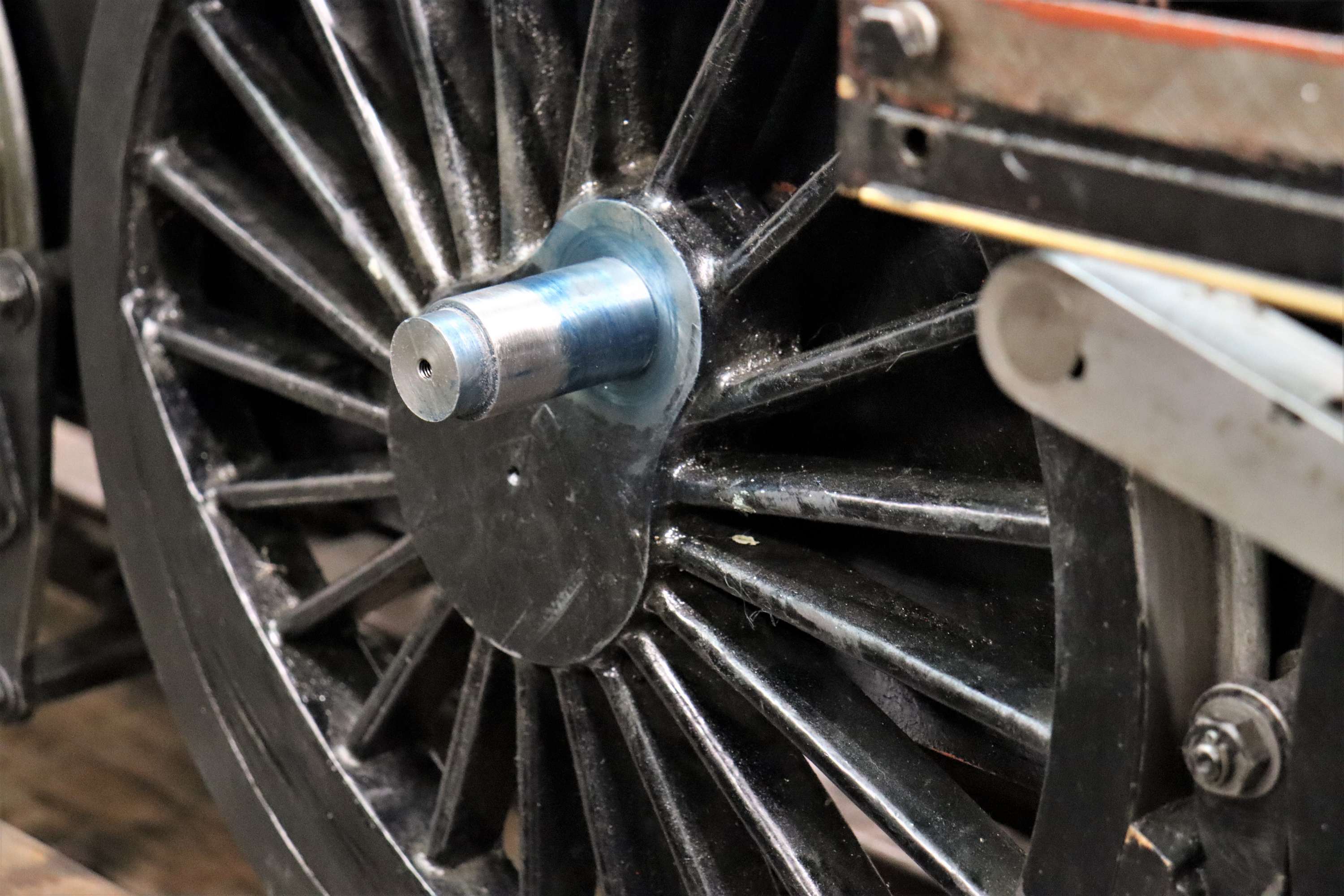 Geoff (now well into his second retirement - we had to let him go some time) kindly came in and set to making an external lap to true the pin up in situ (as the thought of pressing a tightly-fitting pin out of a pretty-much irreplaceable 18 inch diameter iron wheel casting was the sort of thing that gave us sleepless nights!), making a beautiful job of it.
The worn bearings we removed were a strange mixture of materials judging by the different colours in the metal, some of which had given up under the loads encountered in an engine of this size. 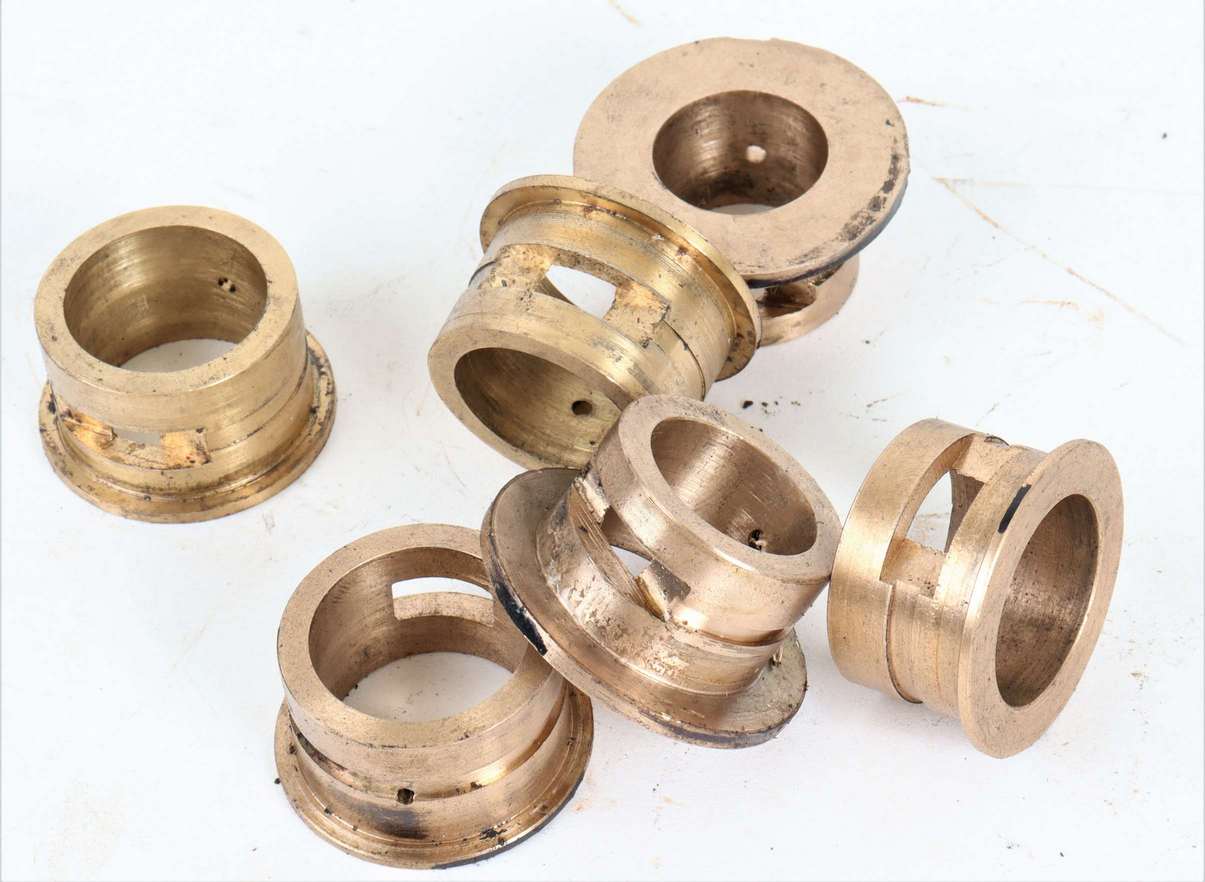 Connor set to and made up new bushes in bronze for the coupling rods, connecting rods and combination levers, along with new expansion link and radius rod die blocks, gudgeon pins and  combination lever pins.
With the new parts made, reassembly proceeded apace 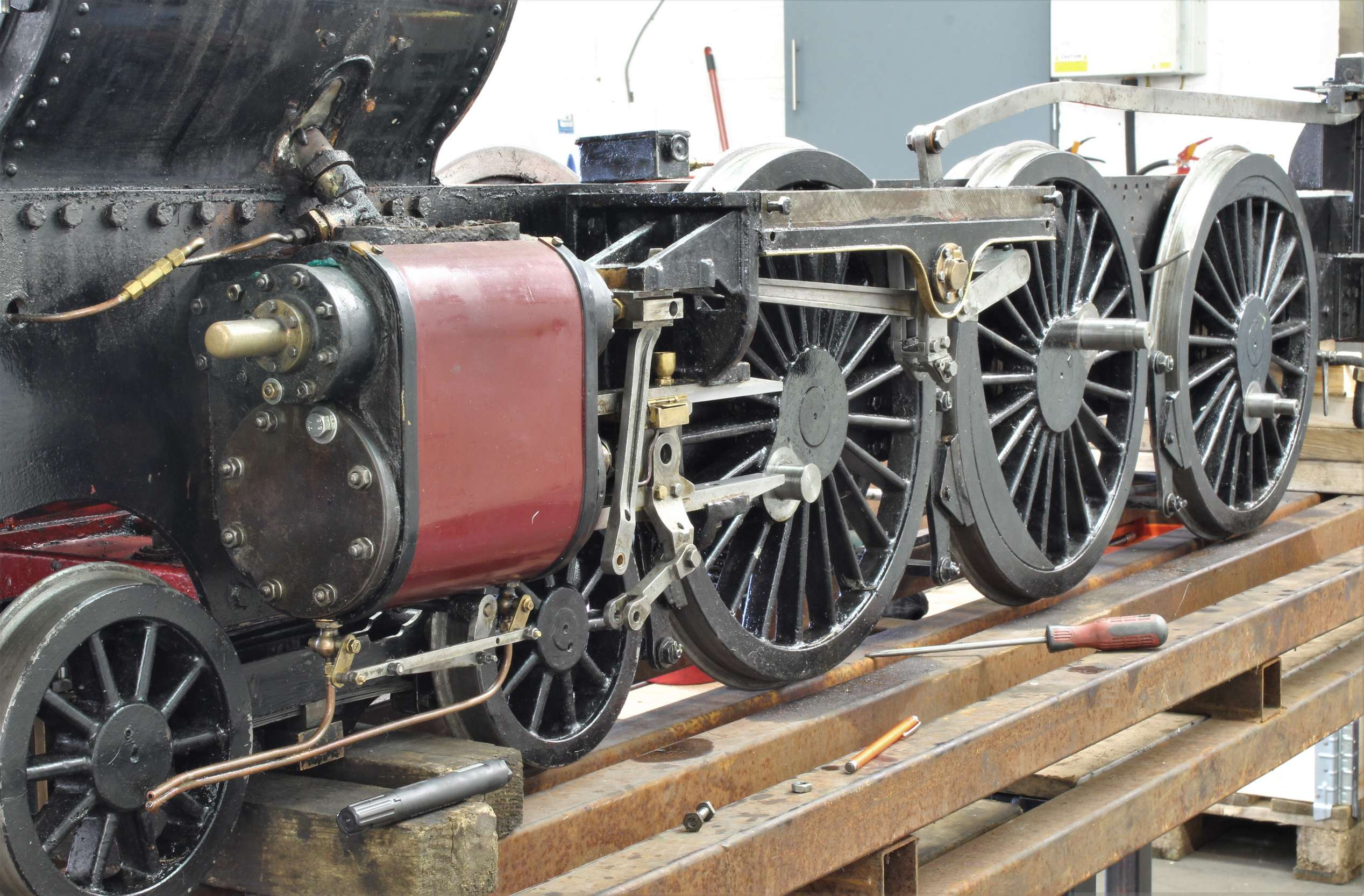 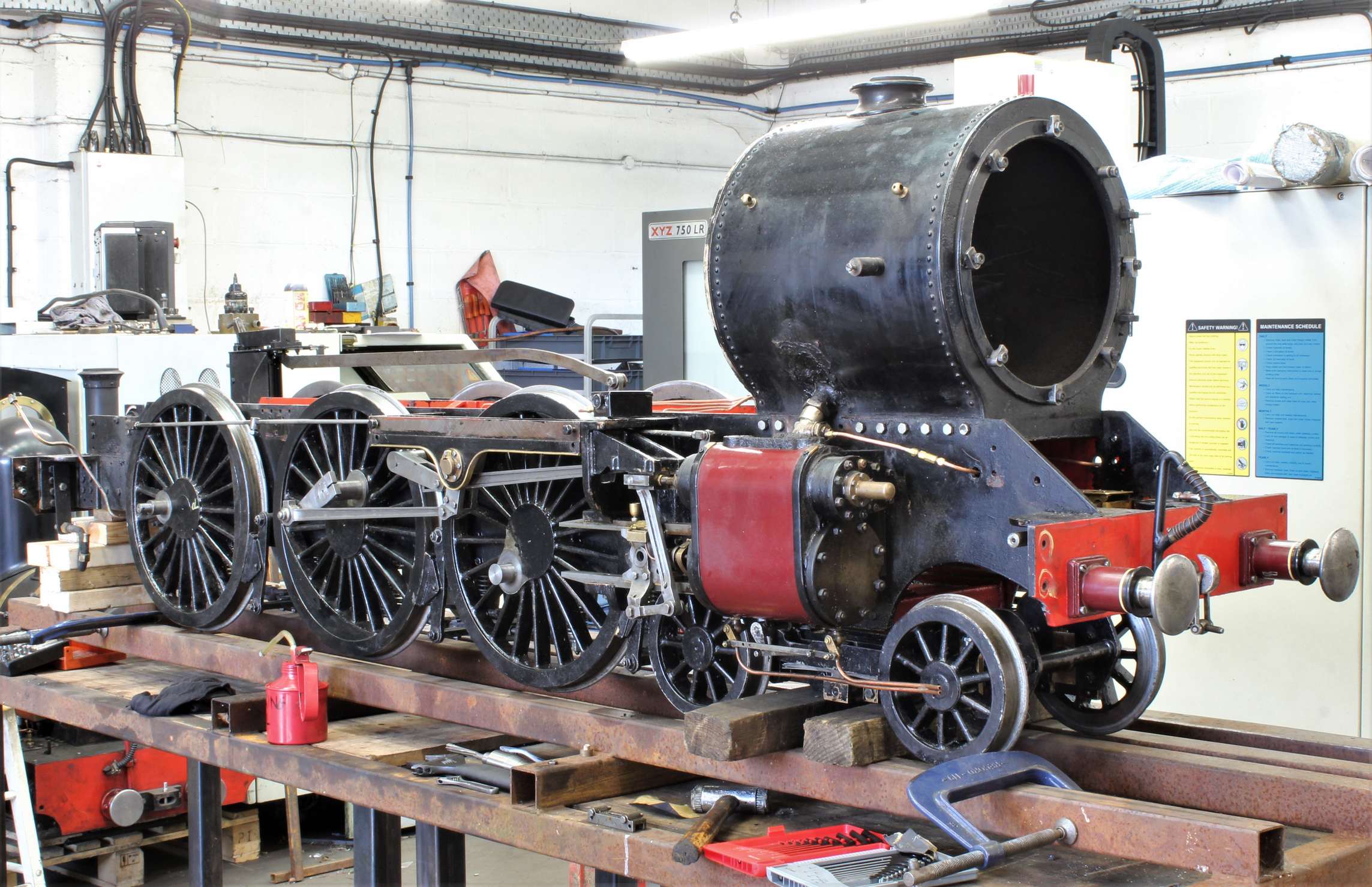 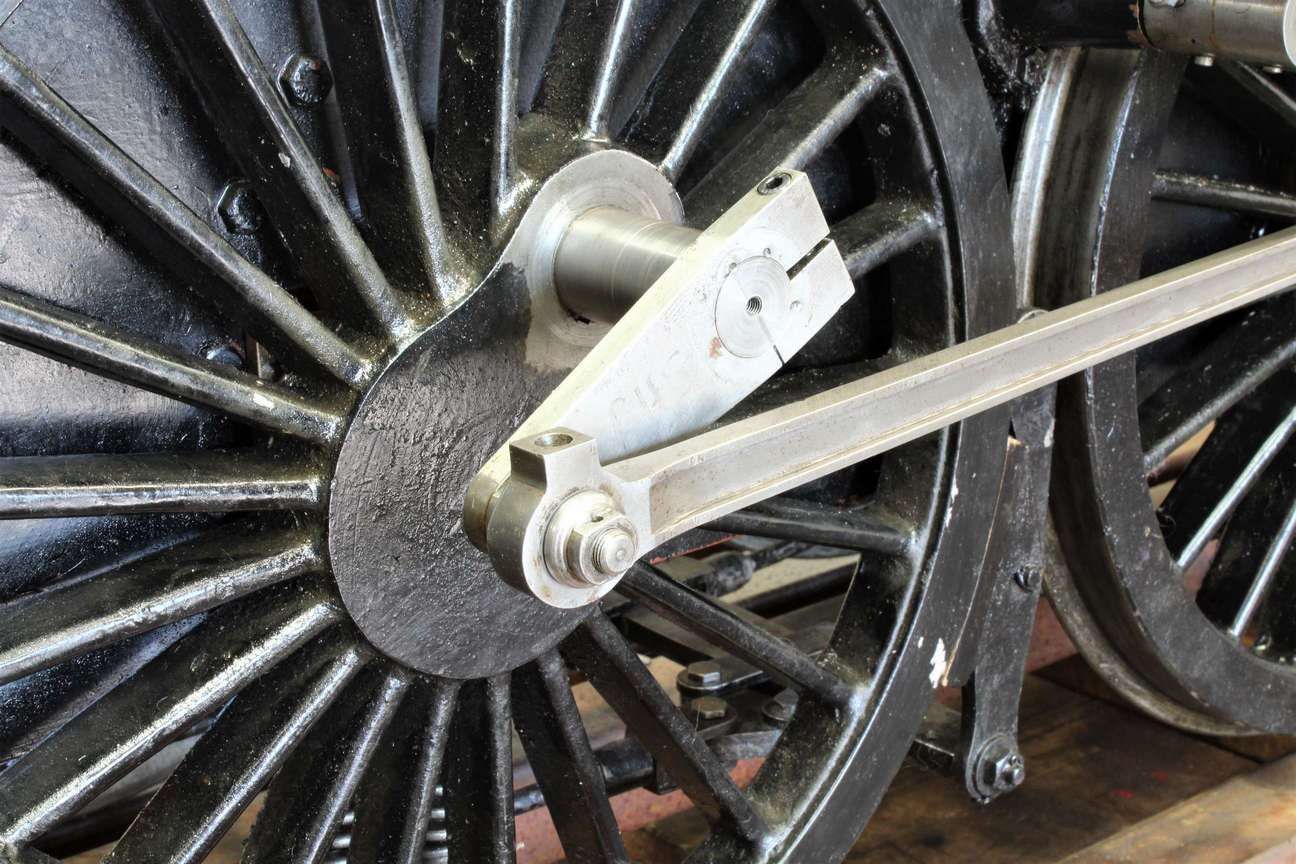 We'd been asked to check over the mechanical lubricators - way we've always done this is to run them into a spring-loaded check valve, which we can set for a delivery pressure above the working pressure of the engine, to be certain that oil will get into the valve chests under all running conditions. 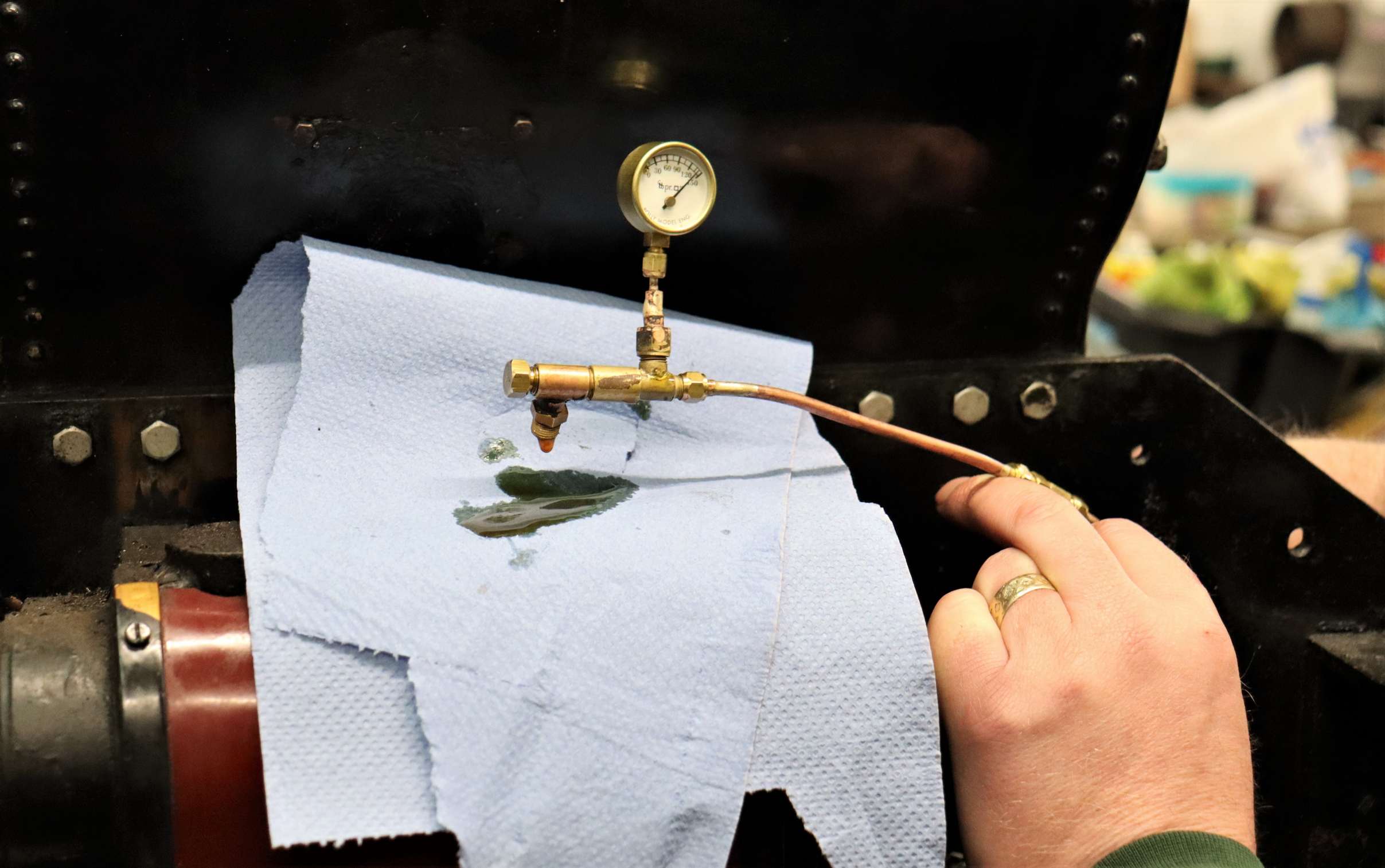 With everything checked and reassembled, we could all look forward to a steam test and delivery back to the customer, giving them a revenue earning locomotive back and us some much-needed space in the workshop. 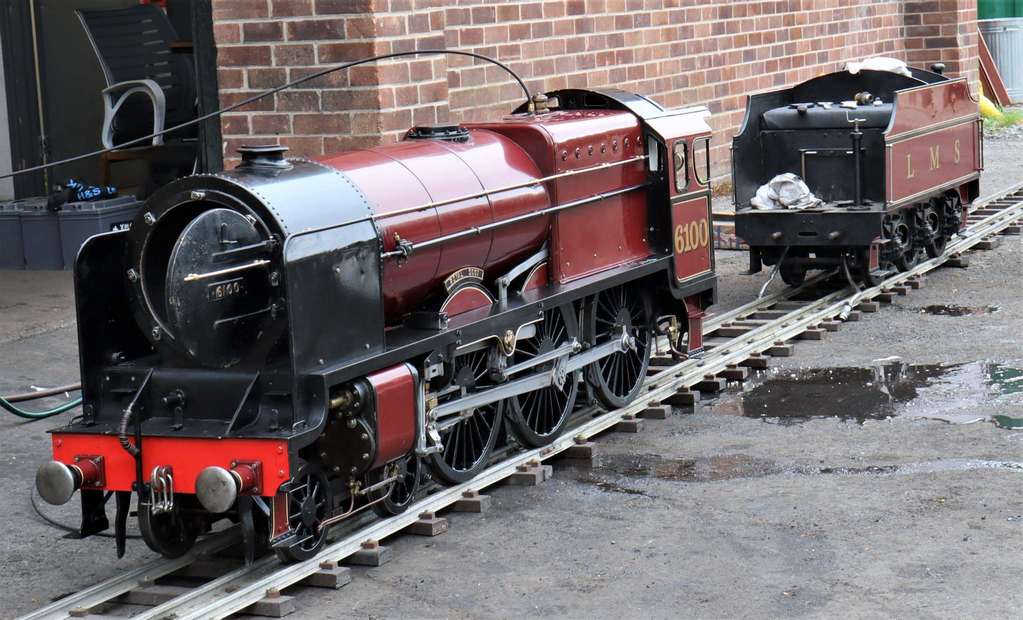 It's always rewarding running an engine just after a bottom end overhaul, if you've done it right it runs pretty much silently other than the gentle beat of the exhaust. There's some video of it running up and down on the portable track here.
Nothing left to do other than put the thing on the trailer and head up to Yorkshire with the trailer. Connor and Ashley both went up, ostensibly because two men were needed for unloading - but who would turn down the chance to test out their handiwork on a long, beautifully landscaped railway? 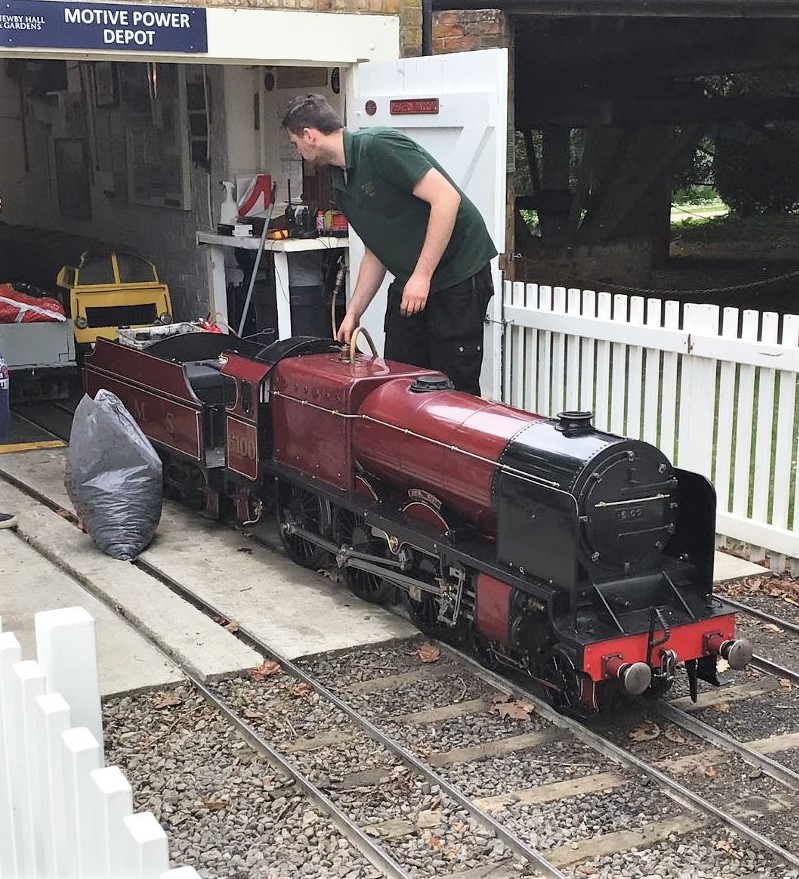 Had a great day - the sky was blue, the sun shone, everybody who drove it said that it was an engine transformed, it had never run so well or so quietly.
So, with quiet self-congratulation we turned the van homewards, minds already on the next jobs in the works (retubes of a 4 inch Burrell road locomotive and magnificent 7 1/4 inch gauge Lynton & Barnstaple "Yeo" since you ask).
Which was what we'd started on when, next morning, the phone rang.
"Smokebox is full of water which has collected overnight, with signs it's run down the front tubeplate".
Back in the van, race up to have a look and - since the petticoat pipe on this engine was brazed in many years ago and there's no way of getting at the wet header with the boiler on the frames - only thing to do was bring it back to the workshop, where we lifted the boiler to have a look.
Now, when it first came to us, the wet header flange had, apparently, been modified to take a pair of O-rings as seals, which in theory sounds like a reasonable idea. What we didn't know at the time was that the first pair of O-rings had lasted less than a season (although should have cottoned on when it was sent down to us with a new set as replacements!)

Problem was, the header flange had to fit within a circle of six studs which determined its maximum outer diameter - and the main steam pipe took up 22mm in the centre. As a result, there wasn't a great deal of room to fit the O-ring and, having machined a groove for it, the metal left between groove and peg-spanner holes used to install the header was very thin indeed.
We did try fitting another pair of O-rings and sealing back and front faces with silicon - once cured the header was dry on hydraulic test, so we put the boiler back on the frames (without cladding this time, we were learning...) and steamed it. All looked good, but the next morning - we'd got water in the smokebox again.
At this point we'd already made the decision to scrap the main steam pipe/header assembly and make up something that we knew would work. Quite apart from the sealing issue, the steam pipe itself, at 0.9mm wall thickness, appeared to have been made from central heating pipe. Whilst this is technically OK for the working pressure, it doesn't have a great deal of mechanical strength and, when being installed, is subject to torsional load as it's screwed into the regulator. The thought of a crack developing down stream of the regulator on a one ton locomotive in public service wasn't appealing... 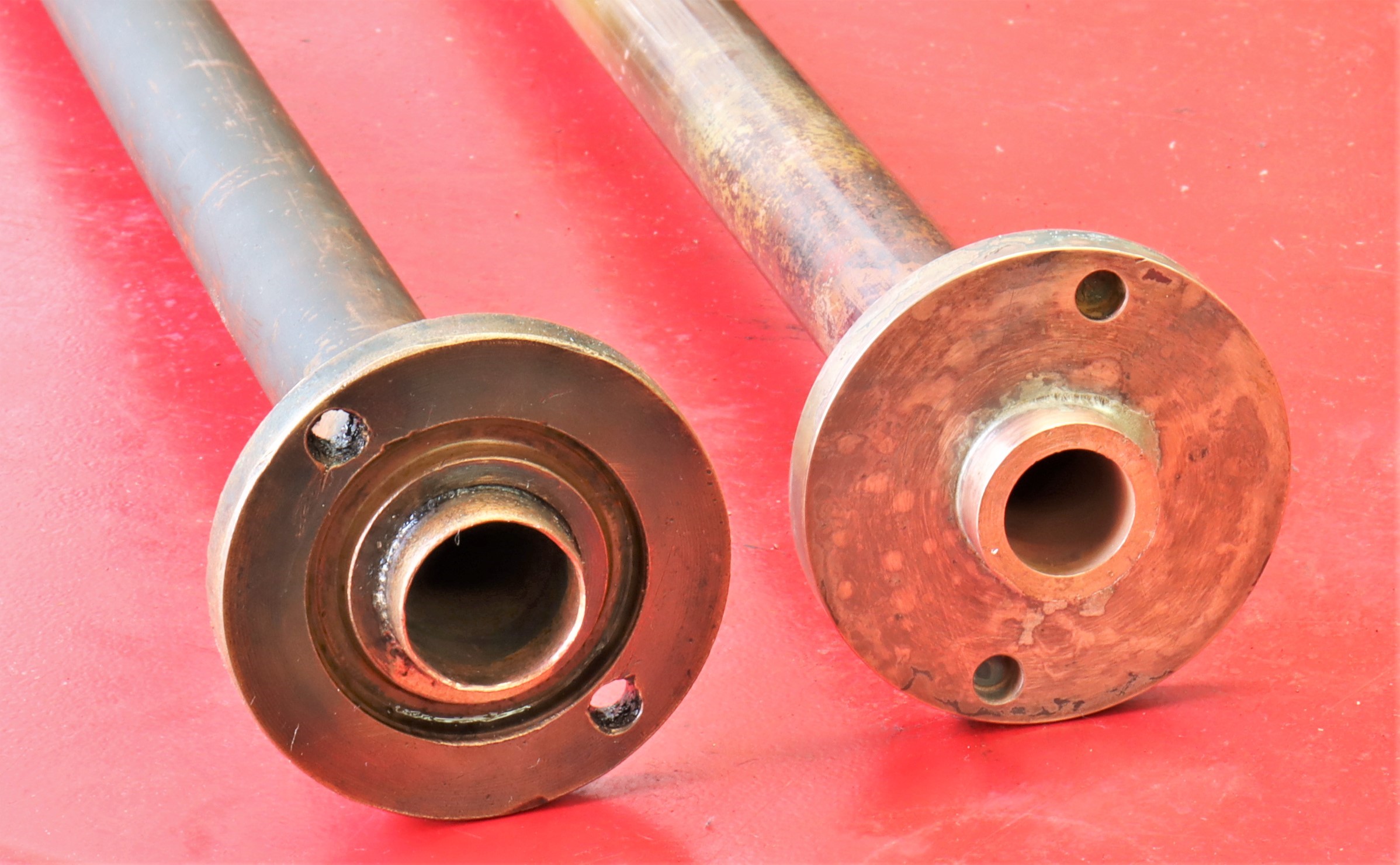 Solution was to make up a new header flange in bronze, into which we silver soldered a 3mm wall copper pipe (the smaller inner diameter doesn't affect performance, it still exceeds the bore of the ball valve regulator). This now had plenty of joint area, it was reassembled with 3mm steam jointing gaskets each side fitted with foliac (yes, we're just traditionalists at heart).
Hydraulic test; boiler back on; steam; hydraulic test; cladding on then... deliver (again!)
A bit of a saga, but, as the advert says, seeing it running afterwards - priceless!