I've said in these pages on many occasions that model engineers are an honest lot. In twenty years we've had one cheque bounced on us by a customer; been fleeced once by a company (now thankfully defunct) who took a few thousand pounds from us for work which never got done; and unknowingly bought a couple of stolen models (happily returned to their rightful owners as soon as we found out - more of that below).

In the same time we've bought and sold many hundreds of engines, often on just a handshake - it's been a nice way to do business.

Word comes to us this week of a man giving £1,000 to a company to work on his engine. Despite many phone calls and assurances that the work was in hand, 12 months later he visited to find his engine in exactly the same condition as when he'd left it with them.

He got his engine back, but has needed to go to court in an attempt to recover his money. Not the first time they've done this - I actually went to get one of our customers' engines back from their premises years ago - same story, work promised but nothing delivered.

Many years ago I went to look at a Romulus a chap had offered to sell to us - it was at the premises of a man who had been working on it. Like the company mentioned above he advertised widely in the model engineering press, offering a repair/overhaul service as well as building engines on commission. The engine was in steam outside when I arrived; while the owner tinkered with it I was taken indoors and offered a 5 inch gauge Stirling Single which was sitting on the bench. I ended up buying the Romulus (bad idea - there was so much wrong with it that, by the time Geoff and I had finished rebuilding it, we'd resolved to build an engine of our own design instead of sorting out other people's problems - that was the beginnings of "Stafford"). Didn't buy the Single - not sure why now (it was a long time ago), but something didn't feel quite right about the setup.

Some months later, we heard that the company who'd done the "overhaul" of the Romulus had gone bankrupt, the owner's whereabouts unknown, his phone unanswered. At that point a man who'd sent his Single for repair found out that the engine, like virtually everything else of value on the premises, had been sold...

Despite all the above, I remain resolutely optimistic about the people in our hobby - the vast majority of customers are decent, honest people, the same going for the suppliers who advertise in the press and turn up year after year at the exhibitions. So, how do you sort the good ones from the rogues?

For what it's worth, I will detail the precautions we take when dealing with other companies.

First off, get along to the Companies House website here and type in the name of the company to whom you're about to entrust your engine, money, or both. You will get all sorts of useful information, well-organized, easily accessible and (best of all) free to download and peruse. 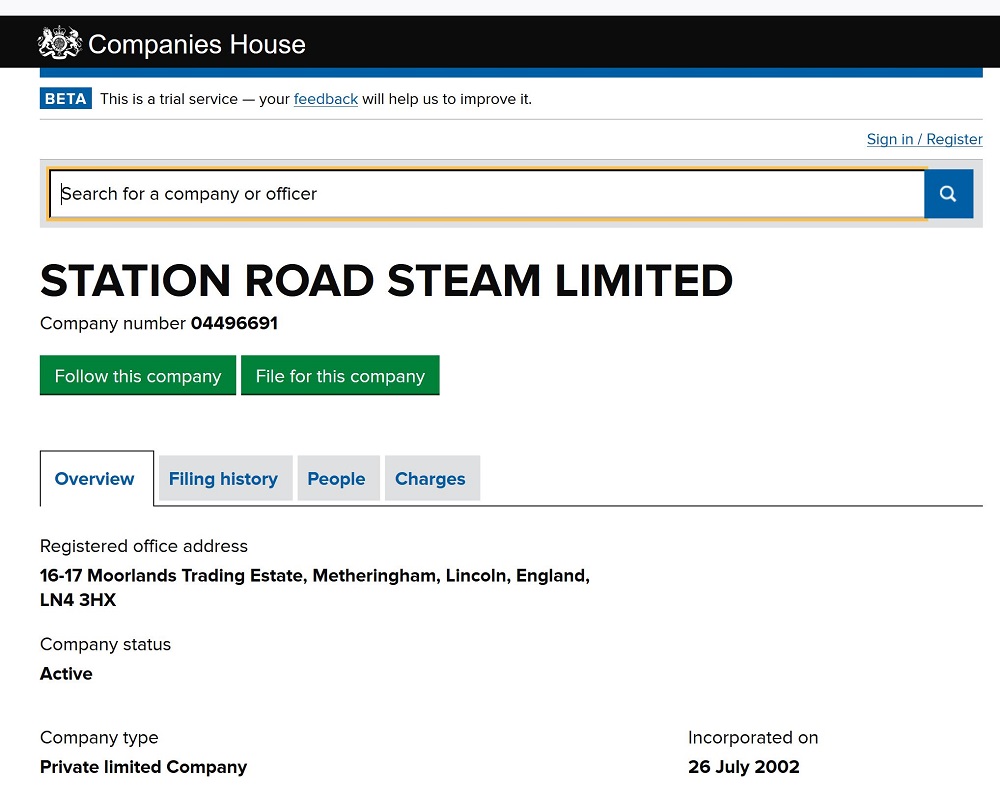 1. To start with, we always look to see if there are lots of companies registered with similar names at the same address:

2. Look at the filing history - this should show that the company are up to date filing their accounts (which will give you a good idea if they're solvent or not) and annual returns (which tells you who owns the company).

What you don't want to see in the filing history is any (or all) of:

- Dissolved via compulsory strike-off (may just be a defunct company, but if still trading and attempting to take your money it's worth asking some questions)

- Accounts overdue (in our experience, there's usually a reason a company doesn't want their accounts published - it's rarely embarrassment at how profitable and well-funded they are)

3. Look at the accounts. Almost always filed as "short form" or abbreviated accounts. They will show you all sorts of things, including the director(s) of the company. Nice, although not essential, to know that the man running the place is a director - if it's his wife, mother or best friend then worth asking a) is he actually eligible to be a director (ie: he's not disqualified for any previous misdemeanours) and b) who is liable to put things right if anything goes wrong?

If you're really interested in accounts and figures, then you can spend a happy half hour looking at the numbers. We normally just go to the bottom of the balance sheet and have a look at the shareholders' funds - this gives you a pretty good idea of what the company is worth. If this is a small (or even negative) number compared to the value of the engine you're about to buy/sell or have repaired by said outfit, then again you need to ask some questions:

If you buy my engine, do I get paid on collection, or will I have to wait until you've been paid for something else?

If you sell my engine on commission, how soon will I receive payment after it is sold?

If I buy an engine from you and it develops a fault, do you offer a guarantee and, if so, can you afford to honour it? Is the engine being sold on commission - if so, does the company have the money to refund me if something goes badly wrong?

In summary, our golden rules are as follows:

Don't pay for servicing or repair work in advance - no reputable company will ask for money up front (after all they have your engine as security). It's entirely reasonable for bills to be sent as work progresses (we issue bills in arrears for work done in the previous month), but never pay more than the cost of the work done to date.

If somebody offers to buy your engine, make sure they've got the money to pay for it! Sounds obvious, but we've heard all sorts of horror stories over the years. Commission sales, where you're paid when the engine sells, can be legitimate (although often the sign of a company short of working capital) however, be careful: make sure the engine is insured whilst away from your care and establish in advance exactly when you will be paid once it's sold.

If you're buying an engine, make sure that the man selling it to you actually owns it. Again, it sounds obvious, but even we've been caught out in the past! We've bought and then sold a couple of "hot" items over the years - on both occasions have refunded our customer the day we found out, then pursued the seller for a refund.

In the first case it involved an engine stolen forty years previously which had passed through an auction - both the seller and auctioneer were entirely honourable, the owner got his engine back and all monies were repaid (including ours, I'm glad to say). Happy ending to this one, the man who got the engine back (it had belonged to his father, from whom it had been stolen) was so pleased that he subsequently bought a traction engine from us.

On the second occasion we weren't so lucky - the man who sold to us had bought from a dealer, who, when informed of the situation shuffled his feet, looked at his fingernails and said he had "bought it in good faith" so couldn't really help. Looking at his company's accounts (see above), shareholder's funds were a small negative number, cash at bank was negligible (it hasn't changed much since) - so unsurprising we didn't get anything back from him.

Something of a lengthy piece, if you've ploughed through it thus far, well done! However, if it saves one person some money and heartache, it will have been worth writing.

To re-iterate what I said at the top of the piece - the vast majority of people you will meet in this hobby are as honest as the day's long. It would be good if we can keep it that way.